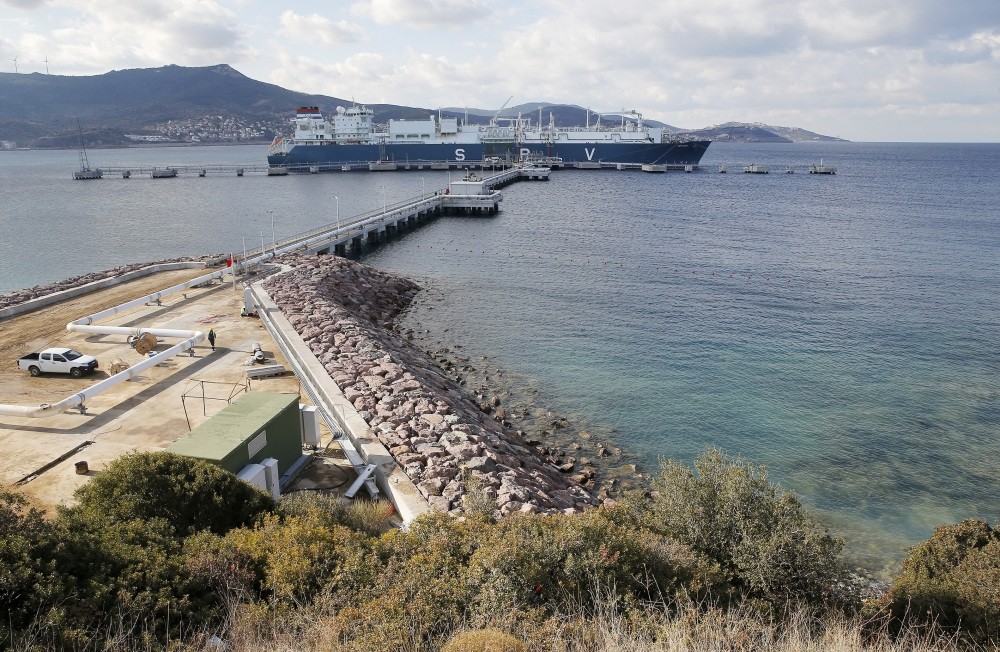 The terminal to cater to energy needs wherever

During his speech at the opening ceremony of the FSRU Project (Floating LNG Terminal / Floating Storage and Regasification), President Recep Tayyip Erdoğan highlighted the remarkable contribution the facility will make to Turkey's energy supply security. "This facility, which has the capacity to send up to 20 million cubic meters of liquefied natural gas (LNG) per day to our national transmission network, will be both a power plant, producing electricity with natural gas, and a fuse for consumption for heating purposes," he said.

President Erdoğan also indicated that natural gas is liquefied and reduced in volume, thus facilitating the storage of LNG is an important opportunity in this regard. "Turkey is ranked eighth in the world in terms of LNG imports. In the coming years, we need to prioritize LNG investments in order to establish a more healthy balance of our natural gas business," he said. Indicating that the floating LNG storage and gasification terminal provides a supply equivalent to almost one-tenth of the natural gas requirement of the country, "Where there is a need for natural gas, this floating terminal will be sent there," he added.

Turkey to be a transition point for energy

Speaking at the inauguration ceremony of Turkey's first Floating Liquefied Natural Gas (LNG) Storage Regasification Unit (FRSU), Prime Minister Binali Yıldırım said the number of companies engaged in the natural gas sector has increased from seven to 68 and work on the Natural Gas Storage Project at Lake Tuz (Tuz Gölü), which will store a billion cubic meters of natural gas underground, has begun Yıldırım confirmed that three more FRSU units will be put into service next year and the capacity of the Silivri storage facility will be doubled.

Pointing out the fact that Turkey tripled its installed power generation capacity and also increased the amount of power generated from renewable sources to 33,000 megawatts, Prime Minister Yıldırım said while the natural gas transmission and distribution lines were about 4,000 kilometers long, they reached 125,000 kilometers in 78 provinces. He hoped all the districts in all the provinces would be able to use natural gas by 2018 as they will all come under the natural gas distribution and transmission lines network.

'The unit was completed in six months'

Giving details on the two important energy projects during the inauguration ceremony, Yıldırım said the Aegean Gas, a liquefied gas storage unit whose current capacity will be raised to 24 million cubic meters in a 50 percent increase, will provide an important support to meet the natural gas demands of the country.

"We will make Turkey the domestic production base"

Speaking at the opening ceremony of FSRU Project (Floating LNG Terminal / Floating Storage and Regasification), Energy and Natural Resources Minister, Berat Albayrak, stating that they are putting a determined stance on nationalizing their energy policies, said they will make Turkey the domestic production base.

In his speech, Minister Albayrak made important statements about domestic production. "We are working on the reduction of energy costs. In liquefied natural gas, we increased our capacity, which was 16 cubic meters last year, to 25 million cubic meters in a short period of 9 months. In a short period of time, we carried the supply of natural gas in our country to a very important point. In 2002, only five provinces benefited from natural gas, however, today there is virtually no province that natural gas has not reached," he said. Saying that, in addition to natural gas projects, politics that they apply in electricity is also important, Albayrak said, "We will raise our installed power to 80 thousand megawatts. Turkey is growing and continues to grow. 2017 will be a year in which we will achieve far greater objectives. Coal is very important to us as a domestic resource. It has an important place in our strategy. In order to actualize our potential, we will increase our investments based on domestic coal. We increased our share of domestic coal in electricity production by more than 30 percent. We have identified new strategies in the domestic production and use of solar and wind technology. We will make Turkey the domestic production base, first in the solar technology, then in the wind technology. All our effort is for Turkey to become much stronger."

A storage capacity of 5.3B cbm

Included among the entry terminals of the natural gas imported by Turkey, the floating vessel will have a storage capacity of 145,000 cubic meters (CBM) of liquid natural gas and can supply over 5.3 billion CBM of gas annually to the national system.

With a capacity of more than 10 percent of Turkey's annual demand of about 40 billion CBM of gas, the unit is continuing its test studies in the process of converting liquefied gas into natural gas. If the unit completes the testing process, it is expected to start providing natural gas to the system by the end of next week.

It has been reported that the demand for floating terminals has rapidly increased in the world due to the advantages of fast mobilization, resource diversity, and supply security, and GDF Suez Neptune was one of about 20 floating units in the world. It was also noted that the vessel's capacity, which would be activated in four years if it were a fixed facility, can be transferred to the national system in just six months thanks to the floating unit. Operated by a long-term leasing method, the power plant was established in Aliağa due to its high natural gas supply, but it can be taken to different regions of Turkey in the case of new pier investments.