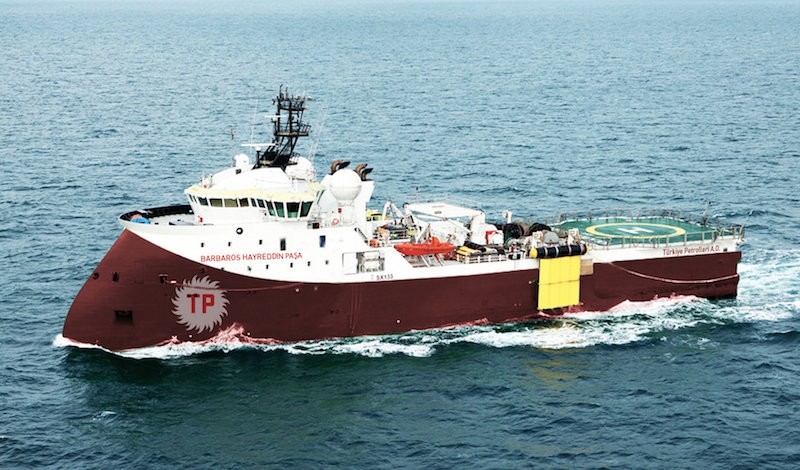 Barbaros Hayrettin Pau015fa set forth April 21 to survey the eastern Mediterranean for oil and gas resources. Archive Photo
by Daily Sabah with Wires Apr 25, 2017 12:00 am

A Turkish seismic ship set forth April 21 to survey the eastern Mediterranean for oil and gas resources and will continue conducting test drillings until May 31. The explorations form part of the "assertive course of explorative and sounding works" that were announced by Energy Minister Berat Albayrak.

The vessel, called "Barbaros Hayrettin Paşa," was purchased in December 2012 for $130 million and can conduct two- and three-dimensional surveys up to a depth of eight kilometers below sea level, according to information obtained from the Ministry of Energy and Natural Resources.

The ship is able to calculate its position and direction automatically using satellite communication and is equipped with a helicopter pad. It is 4.711 tons and it is 84 meters long and 21.6 meters wide. With features such as a double carcass and water cleaning systems, Barbaros Hayrettin Paşa is also said to be one of the most environmentally friendly ships.

The current endeavors form part of the broader Turkish objective to benefit from energy resources available in the eastern Mediterranean and Black Sea. A shift in global investment primacies is likely to occur in favor of Turkey as a result of the explorative works, experts say.

Oğuzhan Akyener, the president of Turkey Energy Strategies & Politics Research Center (TESPAM), told Yeni Şafak that the Turkish geopolitical position was more favorable than Israel's, as long pipelines leading through the Mediterranean would contribute to expenses.

"From this viewpoint, Turkey is the only option in terms of competition and favorable prices. In a market sense, Turkey is the most important country in the region," Akyener said.

Turkey has accelerated the exploration of gas and oil resources in its neighborhood, which is thought to contain more than 60 percent of the world's resources. In early April, Energy Minister Albayrak announced that Turkey would conduct additional explorative studies in two areas in the Black Sea.

The Turkish vessel MTA Oruç Reis will undertake work in the Black Sea, and Albayrak announced the purchase of additional ship scheduled for this year. Turkey is spending approximately $4-5 billion in order to develop the exploitation of oil resources in the Black Sea.