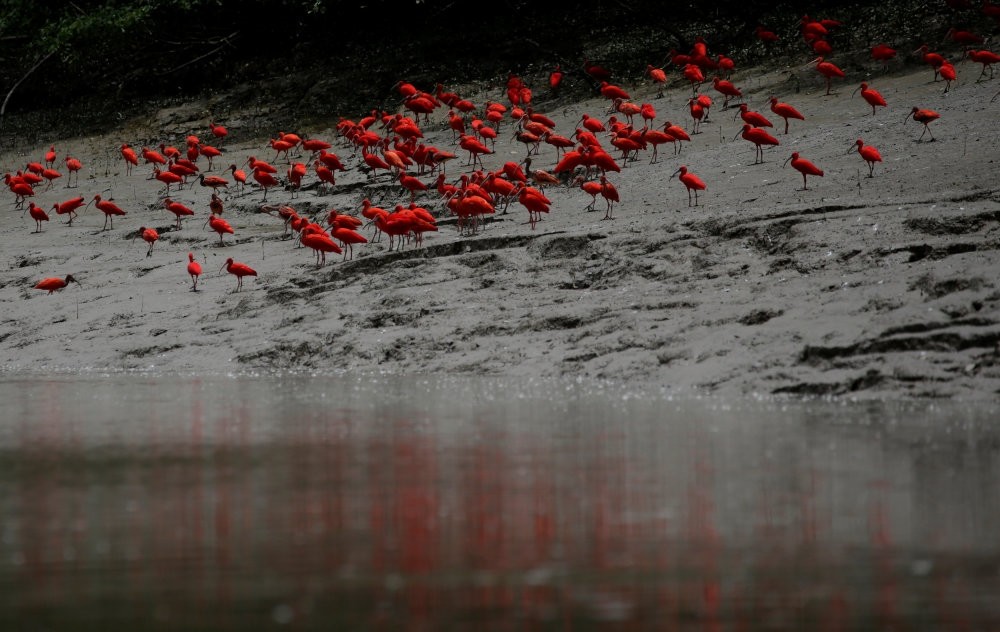 French Total is hunting for what it hopes will be Latin America's next big oil discovery in Brazil's Amazon Basin. (Reuters Photo)
by May 13, 2017 12:00 am

As French oil giant Total seeks to conduct oil exploration in Brazil's Foz do Amazonas Basin area, which some geologists say may contain around 14 billion barrels of petroleum, environmentalists fear it could damage the eco system in the region

Deep beneath the waters of the Atlantic off Brazil's most northern coast, French major Total SA is hunting for what it hopes will be Latin America's next big oil discovery.

Metal drill bits, pipes and containers filled with equipment sit in the tropical port of Belém, near the mouth of the vast Amazon River, ready to sink the first exploratory wells 120 km (75 miles) offshore. Some geologists say the area, known as the Foz do Amazonas Basin, may contain as many as 14 billion barrels of petroleum, more than the entire proven reserves of Mexico. But another underwater discovery threatens to derail Total's plans: a massive system of coral reefs just 28 kilometers from where the French firm and its partners, Britain's BP PLC and Brazilian state oil company Petroleo Brasileiro SA, plan to drill. Brazilian scientists had suspected since the 1970s that the area might be home to a sizeable reef. But the unusual depth of this formation - reaching more than 100 meters (400 ft) - coupled with the Amazon silt clouding the waters, delayed that confirmation until just five years ago, just as the government was putting drilling leases out for tender.

Environmentalists, led by campaigner Greenpeace, are now pressuring regulators to block oil exploration in the area. They believe the thriving reef system, which is more 1,000 kilometers long and dotted with brightly colored coral and giant sponges, may be home to new marine species.

Scientists fear an oil spill could damage this treasure before it has even been studied. Leaked crude from Foz do Amazonas wells could also potentially wreak havoc on Brazil's far north Amapá state, home to the world's largest belt of mangroves and thousands of square miles of virgin rainforest, says environmental scientist Valdenira Ferreira.

Total says it is scrupulously complying with all requirements by Brazilian authorities and is taking every precaution to ensure that drilling would be safe.

The dispute highlights pressures facing Brazil to protect its unique environmental patrimony as its tries to foment jobs and economic growth for its citizens.

It is also reviving concerns that Brazil, which ranks among the Western hemisphere's least open economies, remains a difficult place to do business despite a new conservative government's efforts to cut red tape and woo foreign investment as it seeks to drag the economy out of the worst downturn since the Great Depression.

Four years after Total and its partners paid 622 million reais ($196 million) for five exploration blocks, they are still waiting for the go-ahead from Brazil's environmental regulator, Ibama.The agency has given no indication as to when it will make a ruling. The delay has Total's Chief Executive in Brazil, Maxime Rabilloud, suggesting the company might sit out three offshore oil license rounds that Brazil has scheduled for this year.

He said Total had already invested some 200 million reais ($64 million) in developing its fields in Foz do Amazonas, with no guarantee yet that it will be able to proceed.

Deep-water discoveries during the 2000s off the coast of Rio de Janeiro in an area known as the pre-salt made Brazil one of the oil sector's hottest destinations, prompting then-president Luiz Inacio Lula da Silva to declare "God is Brazilian".

The announcement of the massive Libra offshore prospect in 2010 - the world's biggest in decades - heightened the excitement around the area.

Today, the pre-salt region accounts for almost half of Brazil's oil production, and is rising fast. Success there has piqued interest in other offshore regions of Brazil, including Foz de Amazonas.

Total, which said it hopes to receive a decision from Ibama this year, plans to drill nine exploratory wells at water depths of more than 1,900 meters.

Environmentalists say such extreme depths bring greater risks, making it harder to plug and contain any spill. BP's 2010 Deepwater Horizon oil spill, the worst in U.S. waters, was from a deep-water well of similar depth.

In a 64-page document submitted to Ibama, reviewed by Reuters, Total said the environmental risks were fully understood.

Rabilloud expressed confidence in receiving a green light from Ibama but said the uncertainty over the delay made operations difficult. "Right now, Total is ready to invest," he said. "Now, if you ask me when I will get the license, I can't tell you."