Turkey to drill first well in Mediterranean by end of 2017 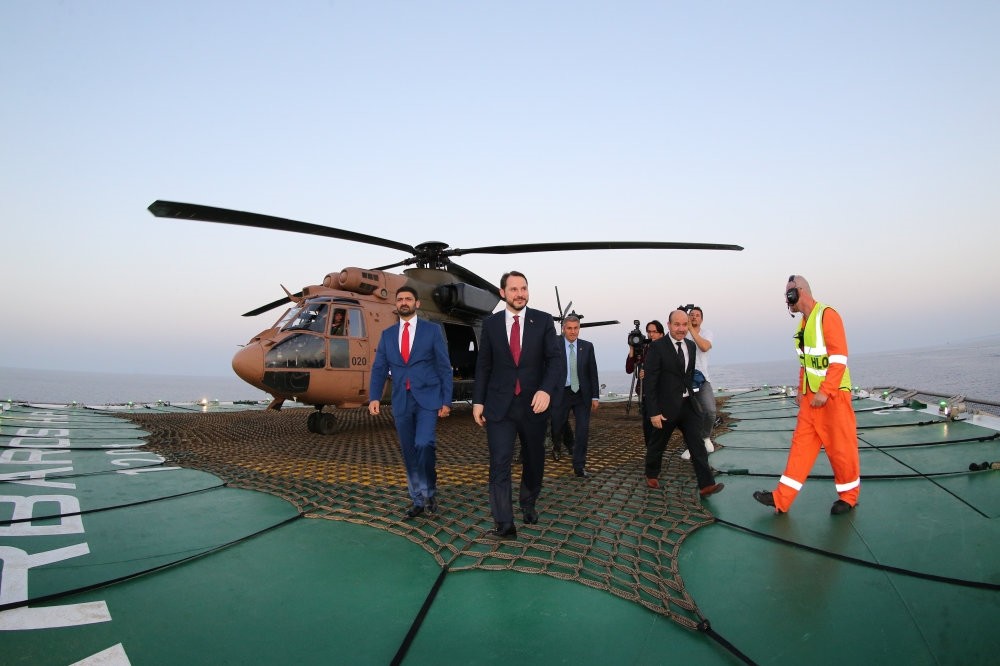 As Turkey aims to boost its position to become a major energy player in the region, Energy Minister Albayrak announced that the country plans to drill a well in the Mediterranean by the end of the year

Turkey will increase its investment in seismic exploration and oil and natural gas drilling, Energy and Natural Resources Minister Berat Albayrak said late Thursday during a fast-breaking dinner with the crew of the Barbaros Hayrettin Paşa vessel, a seismic surveying vessel that is conducting seismic research off of Cyprus, accompanied by Turkish Cypriot Economy and Energy Minister Sunat Atun and the undersecretary of the Energy and Natural Resources Ministry, Fatih Dönmez.

Prefacing that the Barbaros Hayrettin Paşa has already completed two-thirds of a three-dimensional seismic project spanning roughly 1,695 square meters in Magosa, Albayrak indicated that seismic exploration in the region will be completed by the end of this month ahead of the July 10 deadline, exceeding expectations amid recent developments. The minister added that the vessel will continue work on a new three-dimensional seismic project in the Mediterranean region, stressing that the Ministry expects exploration to be completed in at least two or three regions by the end of the year.

Indicating that Turkey will make investments in drilling and seismic exploration in the scope of the its national energy and mining strategy, Albayrak said he hopes that negotiations will soon be completed and that use of the Turkish vessel will speed up drilling and backup drilling rigs will facilitate drilling to begin in the Mediterranean and Black Sea.

"We have looked at the well-drilling reports and after conducing on-site analysis we have set up three-to-four regions for drilling. The Barbaros Hayrettin Paşa is equipped for three-dimensional seismic drilling in two or three of these regions," the minister noted, saying that reports of the two-dimensional and three-dimensional exploration carried out by the vessel will be analyzed and that experts will evaluate the best locations for drilling. The Ministry will then work to optimize drilling efforts in the region. The minister further highlighted that Turkey will give priority to investments in drilling over the next five to 10 years.

Stressing the significance of the Turkish-Cypriot minister who accompanied him on the vessel, Albayrak said that Turkey will remain active in conducting explorations and drilling not only in Turkish waters but also off the coast of North Cyprus, adding that alliance and cooperation with North Cyprus will be beneficial for both sides. The minister indicated that Turkey prioritizes effective drilling in the Mediterranean due to its potential, expressing that the region is entering a new era in oil and gas exploration thanks to developments in the global oil and gas market over the past 15 to 20 years.

Albayrak went on to say that in order to ensure a stronger, more powerful Turkey for the future, the country must take action in oil and gas exploration utilizing domestic engineering and platforms. He said, "Particularly regarding land and sea exploration, there has been serious fluctuation in the costs of new techniques, new investments and transformation of the sector on a global scale. Turkey, as a developing and growing country, must evaluate every opportunity in the best way possible to take effective steps at the optimal time. To facilitate this, we will take serious steps not only in the Mediterranean Sea but also in the Black Sea with our other vessel, the Oruç Reis," Albayrak said.

"As I always mention, Turkey has allocated an average of $44 billion annually in energy investments over the last 10 years. When we include mining investments that were recorded at nearly $10.6 billion, we have a $55 billion annual budget for energy and mining imports," he added.

As previously reported, the seismic vessel embarked into Turkish waters on April 21 to survey the eastern Mediterranean for oil and gas resources.The explorations are being conducted in the scope of the "assertive course of explorative and sounding operations" that Albayrak announced.

The Barbaros Hayrettin Paşa vessel was purchased in December 2012 for $130 million and is capable of conducting two- and three-dimensional seismic surveys at a depth of 8 kilometers, according to information obtained from the Ministry of Energy and Natural Resources.

The ship is able to calculate its position and direction automatically using satellite communication and is equipped with a helicopter pad. It measures 4.711 tons, spans 84 meters in length and is 21.6 meters wide. Featuring a double hull and water cleaning systems, the Barbaros Hayrettin Paşa is also said to be one of the most environmentally friendly ships of its kind.