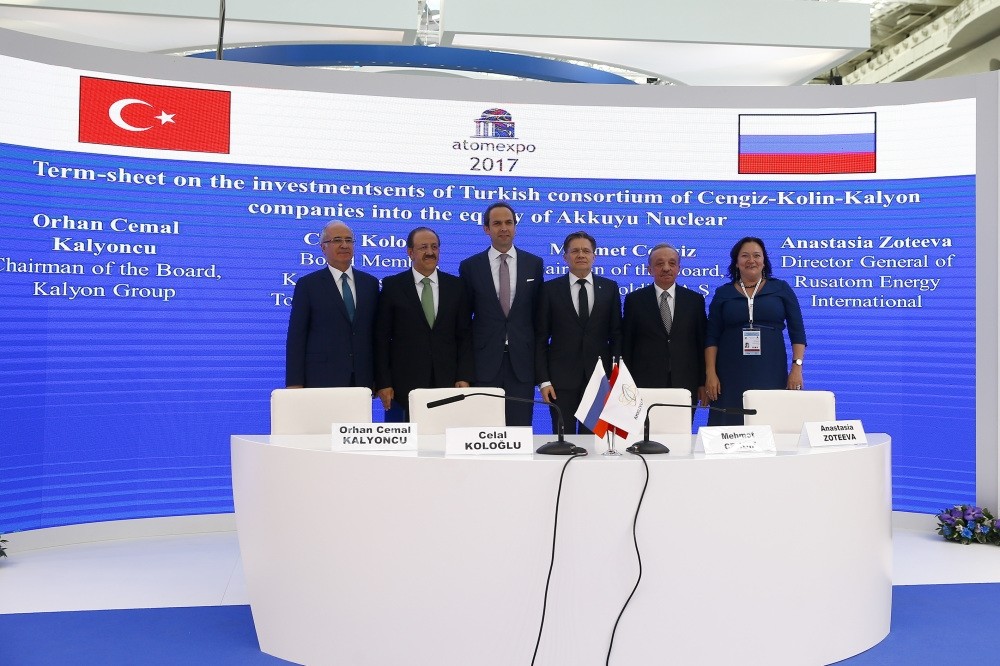 Majority shareholder Rosatom signs deal with the Turkish Cengiz-Kolin-Kalyon consortium to sell its 49 percent stake in the Akkuyu nuclear power plant.
by Daily Sabah Jun 21, 2017 12:00 am

The idea that energy can foster good terms between partner states has recently been illustrated with strong Turkish-Russian energy projects such as TurkStream. The two countries sealed their energy partnership with the preliminary protocol signed between Russia's national nuclear energy corporation Rosatom and the Turkish consortium Cengiz-Kolin-Kalyon (CKK), which stipulated that the latter will acquire a 49-percent stake in the Akkuyu Nuclear Power Plant (NGS).

After the signature ceremony in Moscow on Monday, Cengiz İnşaat Chairman Mehmet Cengiz commented on the partnership, stressing that this cooperation will further improve Turkish-Russian relations and highlighting the necessity for Turkey to increase its expertise in nuclear power.

Cengiz evaluated the fact that the two-year negotiations conducted for the partnership with the two Turkish companies regarding the Akkuyu NGS resulted in the signing of the preliminary protocol on Monday. "The construction on the project starts this year. Turkey must learn nuclear energy and Russia is a very important partner in this regard. If we manage to collaborate on Akkuyu, we will develop our expertise in this area," he said.

Speaking to Anadolu Agency (AA) regarding the preliminary protocol signed yesterday in Moscow for the acquisition of the 49-percent stake of the Akkuyu NGS by the CKK partnership, Cengiz stressed the importance of the Akkuyu project, adding that they believed in Russia's nuclear energy technology.

Suggesting that the Akkuyu NGS is now the most important project in Turkey, Cengiz recalled that they have been conducting these partnership negotiations with this project for two years. "The construction in the project starts this year. Turkey must learn nuclear energy and Russia is a very important partner in this regard. If we manage to collaborate on Akkuyu, we will develop our expertise in this area," he continued. "Under the agreement, CKK will carry Turkey's energy sector to even higher levels. Therefore, we take this protocol very seriously."

Cengiz also noted that a 49-percent stake in the Akkuyu NGS will be divided into three equal shares among the Cengiz-Kolin-Kalyon companies under the CKK partnership.

Pointing out the importance of the Akkuyu NGS for Turkey, Cemal Kalyoncu, head of Kalyon İnşaat, said this agreement will bring great momentum to Turkey's relations with Russia. Kalyoncu explained that they have evaluated various projects, especially airports, as the CKK, noting, "We also have energy and construction projects abroad. We have started considering Africa, as well."

Kalyoncu said they plan new breakthroughs in the renewable energy sector and aim to start solar panel production next year. Kolin İnşaat Board Member Celal Koloğlu pointed out that the Akkuyu NGS is a project that will speed up the recovery process between Turkey and Russia.

Highlighting that the Turkish and Russian leaders decided together to continue the Akkuyu project with a Turkish partner, Koloğlu said, "We have signed the partnership protocol to conduct this project in the best and fastest way. We have also reached verbal agreements with the Russians to carry out other projects together abroad."

At the ceremony organized within the scope of the "IX International Nuclear Energy Forum ATOMEXPO" held on Monday in the capital Moscow, a preliminary protocol was signed to ensure that Russian State Nuclear Energy Agency Rosatom will transfer Akkuyu NGS's 49-percent stake to the Cengiz-Kolin-Kalyon partnership.

The deal has paved the way for the CKK to purchase Rosatom's stake in Akkuyu Nuclear AŞ. The partnership cost will be announced after the signing of the shareholders agreement.

The first agreement on the Akkuyu NGS project, set to become Turkey's first nuclear power plant, was signed with Russia in 2010. The plant to be built in Akkuyu will consist of four reactors with a capacity of 4,800-megawatt installed power, and the first part of the plant, which will cost about $20 billion, is planned to be operational by 2023.

The Turkish Energy Market Regulatory Authority (EMRA) announced Thursday that it granted a power generation license to Rosatom's Akkuyu Nuclear Company for a 49-year period Thursday for its Akkuyu NGS project in the southern city of Mersin.

The project has repeatedly run into delays, including being briefly halted after Turkey downed a Russian jet near the Syrian border in November 2015. Ties between the two countries have since normalized and work on the plant has resumed.

Dependent on imports for almost all of its energy, Turkey has embarked on an ambitious nuclear program, commissioning Rosatom in 2013 to build four 1,200-megawatt (MW) reactors.