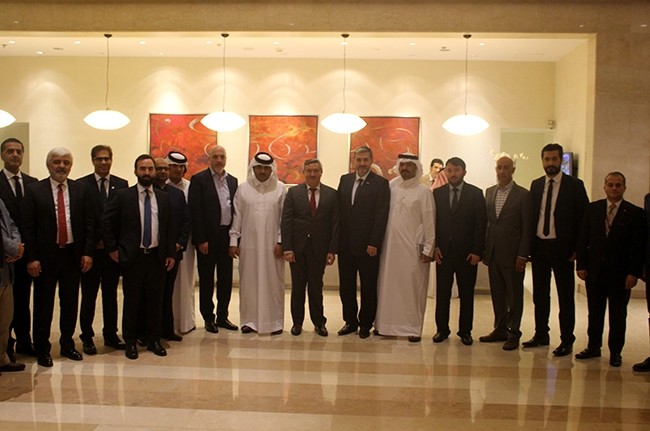 Turkish and Qatari top businessmen came together Wednesday in Qatar's capital Doha to discuss economic and commercial relations between the two countries.

The Turkish delegation included senior executive of the Commercial Bank of Qatar (CBQ) and President of the Qatari-Turkish Union Atilla Kuruçayırlı, President of the Independent Industrialists' and Businessmen's Association (MÜSİAD) Abdurrahman Kaan. The delegation also included Chairman of the Sur International Investment Company Oktay Ercan, and Vice President of Turkish Airlines for Marketing and Sales, Middle East and Cyprus region, Adem Ceylan. All of the delegation members met with some top Qatari businessmen.

Turkish ambassador to Doha Fikret Özer also attended the meeting, during which the parties exchanged opinions on how to improve commercial relations between Turkey and Qatar.

The head of Turkish-Qatari Union Kuruçayırlı said that after an embargo was imposed on Qatar by its neighbors Turkey immediately started daily food deliveries to Qatar with the support of Qatari government.

Repeating that Qatar will host the 2022 FIFA World Cup, Kuruçayırlı said that the Turkish delegation had come to inspect the gaps in Qatari market in this sector.

Chairman of Qatar Trade Centers Company Fairuz Muhyaddin revealed that since the beginning of economic blockade, Turkey had sent 450 tons of fresh food.

"We have come up a common strategy with the Turkish side to provide foodstuffs, medical supplies and basic building materials," Muhyaddin said.