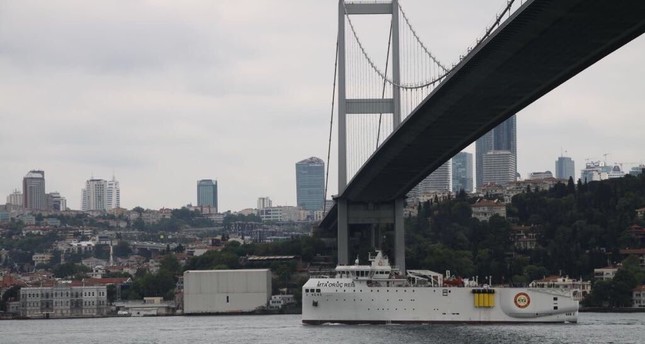 The 86-meter-long, 22-meter-wide vessel will be able to stay at sea for 35 days with full fuel and water reserves.

As Turkey continues to take steps to boost its position as a major energy player in the region, the second of two seismic exploration vessels, the Oruç Reis, is ready to undergo exploration work in the Black Sea

After the completion of all necessary tests, a national seismic exploration vessel, the MTA Oruç Reis, is ready to begin oil and natural gas exploration in the Black Sea. Turkey's premier seismic exploration vessel, the Barbaros Hayrettin Paşa, which is conducting seismic research off of the coast of Cyprus, will be joined by the Oruç Reis, which will also survey for oil and natural gas in the Mediterranean. Built in a shipyard in Tuzla, the vessel, more than 90 percent of which was domestically manufactured, cost around TL 400 million ($113.67 million).

The 86-meter-long and 22-meter-wide vessel will be able to stay in the sea for 35 days when its fuel and water reserves are full. On the vessel, which has an economic lifespan of 30 years, 55 personnel will work, 28 of whom will be researchers and 27 shipmen. There are 35 active cameras located at different angles onboard.

Moreover, the MTA Oruç Reis has a propulsion and maneuvering system with the capacity to conduct 2B and 3B seismic surveys in open seas.

With 2B/3B seismic surveys to be carried out with the vessel, it will be possible to examine depths of 20,000 meters on the sea floor. There are also systems onboard that allow researchers to take samples from the sea floor. Detailed mapping and imaging will be performed on the seabed for hydrographic and oceanographic studies. With a wired robotic system onboard and operated under the sea, it will be possible to conduct seismic observations and take samples at depths of up to 1,500 meters. In addition, current measurements, water sampling and physical, chemical and biological analysis and CTD system surveys will be performed.

The vessel is also expected to conduct research regarding earthquakes as well as tsunami surveys and studies regarding marine structures including harbors, platforms and submarine cable and pipeline location selection, periodic controls and marine pollution.

Mediterranean a paradise for drilling

Two years ago, Turkey's premier exploration vessel the Barbaros Hayrettin Paşa conducted oil and natural gas explorations off the coast of Cyprus but these activities were interrupted in March 2015 when tensions arose between the Greek-Cypriot administration and the Turkish-Cypriot government regarding sovereign ownership of the resources. However, Turkey remains determined to re-launch its survey with another vessel, the Turkuaz, owned by the General Directorate of Mineral Research and Exploration.

The Greek Cypriot government previously initiated a bidding process for exploration activities in the contested natural gas fields including Blocks 6, 8, and 10, to the consternation of Turkish foreign affairs authorities who assert that a considerable portion of Block 6 is located beneath the Turkish continental shelf. Greek Cypriot President Nicos Anastasiades claimed that the contracting issue and the use of the resources in these oil fields is a matter of sovereignty for the Greek Cypriot government. The Greek Cypriot partnership with foreign companies such as Italian energy giant Eni, which allowed these companies to carry out seismic exploration, caused tensions to flare up between Turkish and Greek administrations and negatively affected peace talks on both sides. Turkish Cyprus has since stated that the island's resources belong to both communities.

Meanwhile, Energy and Natural Resources Minister Berat Albayrak has emphasized that there will be a more aggressive process in exploration and drilling activities in Turkey soon as part of the National Energy and Mining Policy. "With the Barbaros Hayrettin vessel in the Black Sea and the Oruç Reis in the Mediterranean this month, we will conduct both two-dimensional and three-dimensional [2B/3B] seismic surveys in our two seas," he said.

Prefacing that the Barbaros Hayrettin Paşa has already completed two-thirds of a three-dimensional seismic project spanning roughly 1,695 square meters in Magosa, Albayrak indicated that seismic exploration in the region will be completed by the end of this month ahead of the July 10 deadline, exceeding expectations amid recent developments.

He added that the vessel will continue work on a new three-dimensional seismic project in the Mediterranean region, stressing that the Ministry expects exploration to be completed in at least two or three regions by the end of the year.

Albayrak also indicated that in order to ensure a stronger, more powerful Turkey for the future, the country must take action in oil and gas exploration and utilize domestic engineering and various platforms. He said, "Particularly regarding land and sea exploration, there has been serious fluctuation in the costs of new techniques, new investments and transformation of the sector on a global scale. Turkey, as a developing and growing country, must evaluate every opportunity in the best way possible to take effective steps at the optimal time. To facilitate this, we will take major steps not only in the Mediterranean Sea but also in the Black Sea with our other vessel, the Oruç Reis," Albayrak said.

"As I always mention, Turkey has allocated an average of $44 billion annually in energy investments over the last 10 years. When we include mining investments that were recorded at nearly $10.6 billion, we have a $55 billion annual budget for energy and mining imports," he added.

With regard to Turkey's strategy in the coming period, Albayrak previously said that Turkey has never conducted and will never conduct any projects outside of maritime law in both the Black Sea and the Mediterranean, adding that drilling projects have always been conducted in the scope of international and domestic maritime law. Albayrak said that at least one or two wells will be drilled in the sea under the auspices of newly launched steps, saying: "This will be done because, by evaluating the data we find in this framework and information in the scientific field, we will start taking direct steps regarding the most optimal fields. There is a lot of potential here and I believe we will get positive results."

Share on Facebook Share on Twitter
Previous in Energy Russian state-owned gas and oil giant Gazprom could leave the Turkish... Next in Energy As Turkey and Russia continue to strengthen their collaboration in...
DAILY SABAH RECOMMENDS