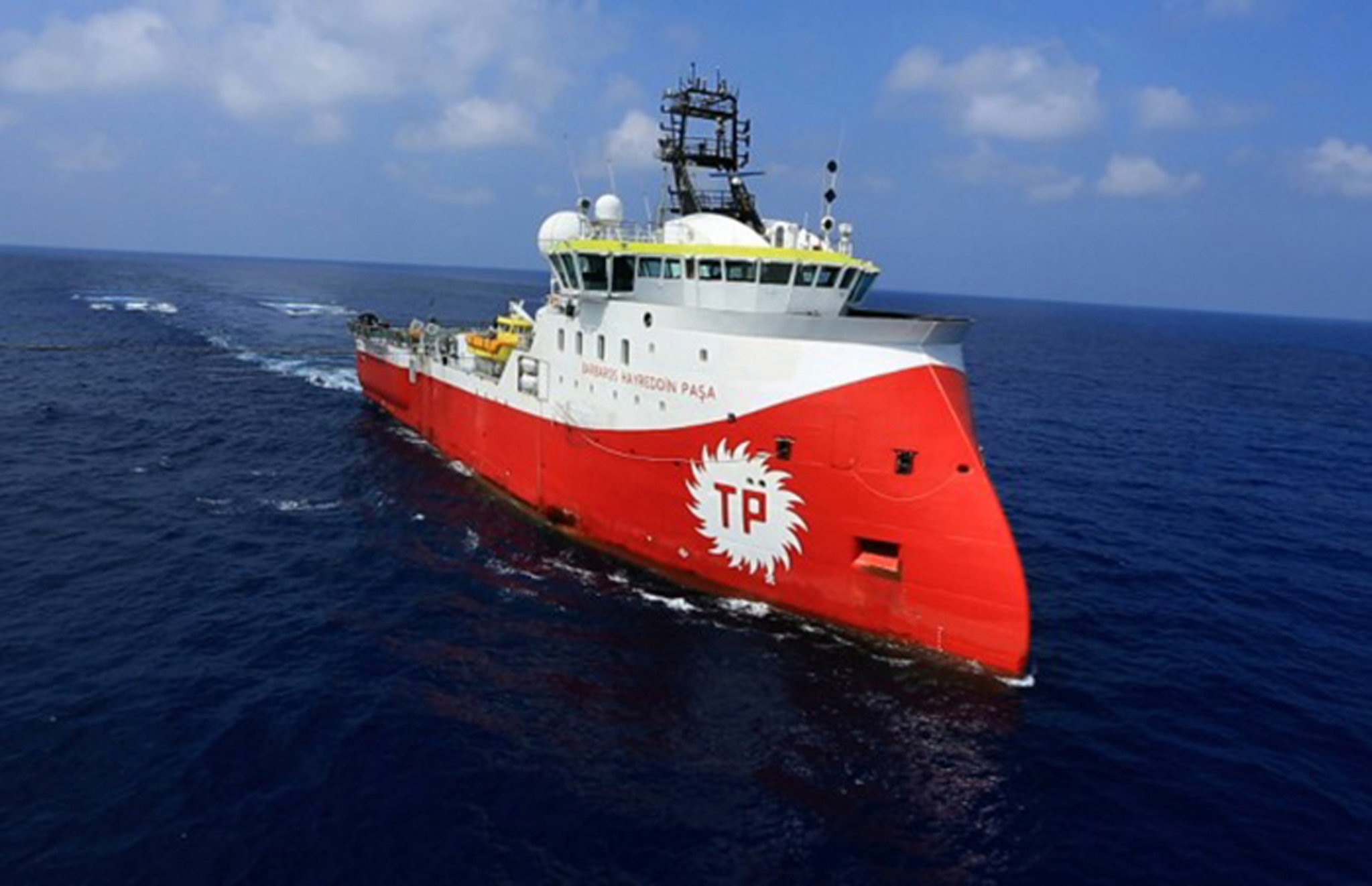 Following the announcement from Greek Cyprus that it will launch drilling activities off Cyprus's southern coast, a Turkish seismic exploration vessel has increased its activities off of Cyprus, showing Turkey's determination to protect Turkish Cyprus interests

Turkish seismic exploration vessel Barbaros Hayreddin Paşa's presence and an acceleration in its activities off the shore of Cyprus has clearly shown Turkey's determination to protect the rights and interests of the Turkish Republic of Northern Cyprus (KKTC), following a recent announcement by southern Cyprus that it will launch drilling activities off Cyprus's south coast.

The fact that the Turkish vessel will perform drills off the island's south western Paphos, in the fifth and sixth blocs, in the presence of the Turkish war ships has now turned heads toward the region.

The drillings launched south of Cyprus with the permission of the Southern Cyprus administration to the Franco-Italian partnership TOTAL / ENI oil companies maintains its place on the agenda. Turkey's search vessel Barbaros Hayreddin Paşa's presence in the region has boosted mobility on the island.

The drilling tests were expected to be completed within 15 days and the importance given to the issue by Turkey has made it the number one agenda in the Greek press recently.

Previously, President Erdoğan aslo condemned the one-sided interests of the Greek Cypriots and warned global oil companies not to make agreements with Cyprus.

Meanwhile, reports claimed that the drilling in the eastern Mediterranean was also discussed at Monday's National Security Council (NSC) meeting, convened under the auspicious of President Recep Tayyip Erdogan.

A declaration published after the meeting in the Presidential Palace read, "Our determination to protect the rights and interests of the Turkish Republic of Northern Cyprus and Turkey has been highlighted within the framework of our fundamental rights on natural resources in the eastern Mediterranean."

In the meantime, Greek Cypriot leader Nicos Anastasiades has claimed that all legal measures have been taken for the drilling tests on the 11th bloc, which corresponds to the sea border between Cyprus Island and Egypt, and said there was no reason to panic. The tests will be carried out by French energy giant TOTAL's search vessel West Capella.

Anastasiades said that he agrees with Turkey's view that "the hydrocarbon deposits around the Cyprus Island also belonged to the Turkish Cypriots."

"The income that will be generated from natural gas and oil around the island will be transferred to a 'national fund' and the Greek Cypriots and Turks will benefit from this fund together with the solution of the Cyprus problem," the Greek Cypriot leader said.

Last week, West Capella traveled to Cyprus to carry out drillings on behalf Total and Italian energy company Eni in 11th bloc located in the so-called exclusive economic zone. Later on Thursday, the Turkish navy announced that the drilling vessel was under surveillance by its frigate TGC Gökçeada.

The move came after Ankara strongly condemned the planned drilling activity, calling Greek Cyprus "insincere," and announced that it will take steps against what it called unilateral decisions.

Right before Turkey dispatched the frigate, Foreign Minister Mevlüt Çavuşoğlu criticized Greek Cypriot activities in the Mediterranean and said that Turkey will take necessary measures against the Southern Cypriot's unilateral claims on the island's natural reserves.

In a similar move, exploration vessel Barbaros Hayreddin Paşa set off from the port city of Magosa for Güzelyurt, just northwest of the Cypriot island Sunday. The vessel will carry out seismic surveys in the region, declared as an exclusive economic zone (EEZ) by the United Nations.

Having taken action in order to increase its energy efficiency, Turkey has recently accelerated its gas exploration activities in the Mediterranean.

Energy and Natural Resources Minister Berat Albayrak had said in an earlier statement that the seismic surveys in Magosa were completed and that the next step will be Güzelyurt.

Stating that Turkey will play a more effective role in the Mediterranean along with the studies in Güzelyurt, Minister Albayrak said, "Güzelyurt is important for us. This field was referred to the U.N. especially in this regard specific to our continental shelf and registered accordingly by our Foreign Ministry. Search and drilling activities will be launched after seismic detail and analysis reports."