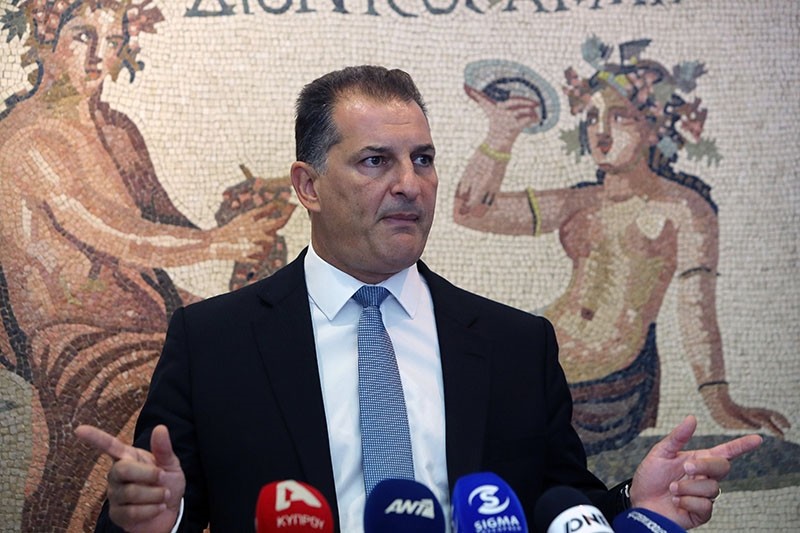 Greek Cypriot Administration Energy Minister Yiorgos Lakkotrypis talks to the media during a press conference at the energy ministry in Nicosia, September 12, 2017. (EPA Photo)
by Daily Sabah with Agencies Sep 12, 2017 12:00 am

A gas field discovered off the southern coast of Cyprus that contains "less than" 0.5 trillion cubic feet of the hydrocarbon is too small to make it commercially viable on its own, the Greek Cypriot energy minister said Tuesday.

But Yiorgos Lakkotrypis said the fact that gas was found in an area whose geological make-up is similar to that where a huge discovery was made off Egypt offers "encouraging signs" that more could be found in waters surrounding the Mediterranean island.

"We're not disappointed with this drilling," Lakkotrypis told reporters. "It leaves us optimistic for the future."

The drilling was launched in mid-July at a time when Turkish Cypriot and Greek Cypriot parties were engaged in the latest round of peace talks in Switzerland. Turkey and Turkish Republic of Northern Cyprus (TRNC) criticized the drilling, as the two parties argue that natural resources around the island belong to both communities. The two countries added that both sides should refrain from unilateral deals and actions before a permanent solution could be reached on the island, which has remained divided since 1974.

At the time, Turkey responded by sending a frigate to the area to monitor drilling activities.

Exploratory drilling at the "Onisiforos" well was conducted by a consortium made up of French energy company Total and Italy's Eni. Lakkotrypis said the consortium is obligated by contract to notify Greek Cypriot authorities within 30 days whether they'll go ahead with more exploratory drilling in Block 11.

Block 11 sits near Egypt's Zohr gas field, discovered by Eni in 2015, which holds an estimated 30 trillion cubic feet of gas and is the biggest gas field ever found in the Mediterranean.

The block is one of eight areas where major oil and gas companies, including ExxonMobil, hold licenses to carry out exploratory drilling off Cyprus' southern coast. ExxonMobil officials have said they would start drilling in the second half of next year.

"The significance of the Onisiforos drilling is that it proved that the Zohr-type geological model works," said Lakkotrypis. "This raises prospects about the geological structures found in other Blocks that are similar in nature to Zohr and Onisiforos."

In 2011, Texas-based Noble Energy discovered the Aphrodite field off the southeast coast of Cyprus, which is estimated to contain over 4 trillion cubic feet in reserves.

Israeli firms Delek and Avner, as well as Royal Dutch Shell, all have a stake in that block, which has been declared commercially viable.

But Italian-South Korean venture ENI-Kogas has also so far failed to discover any exploitable gas reserves in deep-sea drilling off the island.

Lakkotrypis said the Greek Cypriot government's aim is to build a gas processing plant on the island where the hydrocarbon can be liquefied for export, as long as enough reserves are discovered to merit the huge investment.

Greek Cypriot Administration and energy-starved Egypt are looking into the possibility of transferring gas from the Aphrodite field to Egypt via an undersea pipeline.

U.S. giant ExxonMobil said last week it planned two drills in the second half of 2018 to explore oil and gas off the island's southern coast.