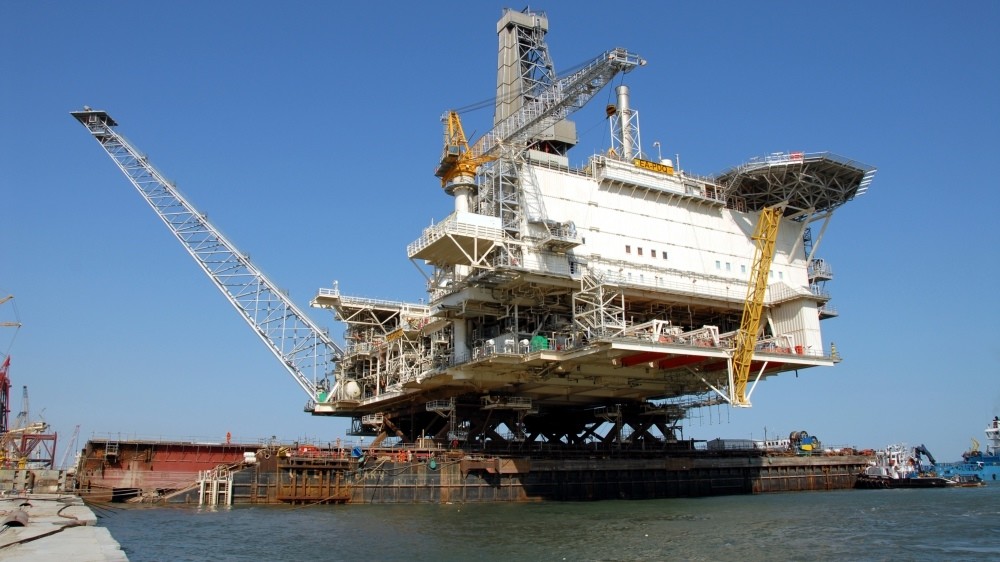 The agreement for the Joint Development and Production Sharing at the Azeri-Chirag-Deepwater Gunashli (ACG) has been extended until 2050.
by Daily Sabah with AA Sep 15, 2017 12:00 am

Azerbaijan's multinational production sharing agreement, of which Turkish Petroleum is a party, was renewed Thursday. Calling it ‘the contract of the century,' President Erdoğan said it will continue sustaining regional stability by reinforcing the international partnership

The term of agreement for the Joint Development and Production Sharing at the Azeri-Chirag-Deepwater Gunashli (ACG), Azerbaijan's largest oil field, has been extended until 2050. Turkish Petroleum, Energy and Natural Resources Minister Berat Albayrak attended the signing ceremony on behalf of Turkey, which is a member of the consortium that operates the field. Delivering a message from President Recep Tayyip Erdoğan at the program, Minister Albayrak said the extended multinational contract was one of the best examples of effective international and regional cooperation.
​
Erdoğan further noted that the agreement has significantly contributed to the stability of the entire region, has reinvigorated its strategic location and will continue to do so.

Defining the agreement as the "contract of the century," President Erdoğan highlighted that the ACG Joint Development and Production Sharing Agreement, which was first signed in 1994 and due in 2024, as well as the Baku-Tbilisi-Ceyhan Oil Pipeline, operational since 2006, has maintained a secure production of Azeri oil and its safe delivery to global markets.

The collaboration that began with the transfer of Azeri oil to the global markets through Turkey has depeened with the Shah Deniz Stage 1 and Baku-Tbilisi-Erzurum natural gas pipeline projects, the president noted.

"Shah Deniz Stage 2 and Trans Anatolian Natural Gas Pipeline Project (TANAP) that will enter service next year will be the zenith of Turkish-Azeri cooperation," Erdoğan said adding that, "Turkey and Azerbaijan - the two states one nation - will act in full partnership in the future as they have done before."

Energy Minister Berat Albayrak also delivered a speech at the program and hoped that the ACG agreement will retain its status as the contract of the 21st century and indicated that energy cooperation between Turkey and Azerbaijan will grow exponentially with new investments. 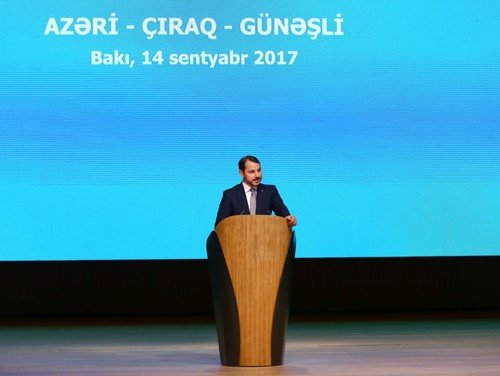 He also drew attention to the character of the agreement that symbolizes the limitless sources of Azerbaijan and noted that the ACG agreement has made a remarkable contribution to the safe delivery of the country's oil to the global energy market.

Stressing the importance of extending the agreement, Albayrak said that a total of 2.6 billion barrels of crude oil has safely flowed through the Baku-Tbilisi-Ceyhan since it opened in 2006.

"Azerbaijan is an indispensable and reliable partner both for Turkey and other energy markets," he said.

The minister also explained that Turkey and Azerbaijan have also accomplished the South Gas Corridor (SGC), which was first envisioned by the European Union (EU) to diversify its energy sources and reduce Europe's dependency on Russian gas.

Elaborating on Shah Deniz Stage 2 Albayrak said: "As part of this project, Turkey and Azerbaijan have actualized TANAP. It will, on one hand, boost Azeri gas trade, while on the other it will ensure a significant natural gas resource diversification for Turkish and European markets."

"TANAP is a token of strong Turkish-Azeri partnership which relies on "win-win" principles. Once the project is operational in the second half of next year, it will become a lynchpin in Europe's supply security."

The project will deliver an estimated 16 billion cubic meters (bcm) of gas to Georgia, Turkey, Greece, and Italy.

Recalling that Turkish Petroleum (TP), a partner of ACG, has been operating in Azerbaijan since 1991, Albayrak noted that this was TP's first overseas investment. The company took part in the Shah Deniz project in 1996, which reinforced the partnership between TP and State Oil Company of Azerbaijan Republic (SOCAR).

In 2014, TP acquired an additional 10 percent in the Shah Deniz oil field, taking its total stake in the project to 19 percent.

The minister concluded that Turkish-Azeri partnership was an important milestone for the future of a currently struggling region. He reiterated Turkey's firm belief that energy could drive peace and stability instead of triggering conflict and poverty.

ACG is a complex of oil fields in the Caspian Sea, about 120 kilometers off the coast of Azerbaijan. It consists of Azeri and Chirag oil fields, and the deep water portion of the Gunashli oil field. It was developed by the Azerbaijan International Operating Company, a consortium of international oil companies, and operated by British Petroleum (BP) on behalf of the consortium.

The production sharing agreement was signed by the parties in September 1994 for development of the fields for 30 years. The consortium started development drilling of the Chirag field in August 1997 and the first oil was produced in November 1997.