TANAP expected to be completed ahead of time 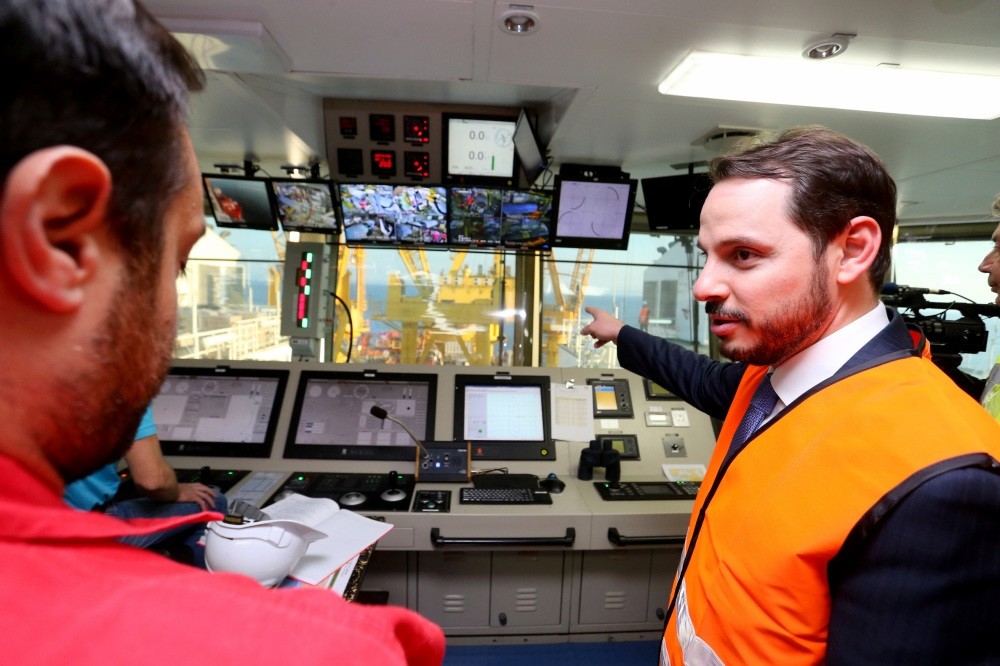 Energy and Natural Resources Minister Berat Albayrak (above) conducted on-site inspections on the vessel carrying out the TANAP project's u00c7anakkale underwater section.
by Daily Sabah with AA Oct 07, 2017 12:00 am

Indicating that work on the Trans-Anatolian Natural Gas Pipeline project is running at full speed, Energy Minister Albayrak said they hope the project will be completed ahead of time

Energy and Natural Resources Minister Berat Albayrak said Friday that the underwater section in the Dardanelles is a critical cornerstone for the Trans-Anatolian Natural Gas Pipeline (TANAP) project.

He said they hope the project will be completed earlier than previously forecast if everything goes as planned. Albayrak, who conducted on-site inspections on the vessel carrying out the project's Çanakkale underwater section, received information from authorities. Albayrak told Anadolu Agency (AA) that the Çanakkale underwater section is one of the critical cornerstones for TANAP, regarded as a very important project for Turkey and Europe.

Albayrak pointed out that TANAP is a vital, historic project in terms of European and natural gas supply security, especially in Azerbaijan and Turkey.

He said that former energy ministers and bureaucrats and those currently in office have worked very hard for the TANAP project. "Indeed, the work continues at full speed. I hope the project will be completed earlier than calculated and planned if things go with this planning," Albayrak said, stressing that Turkey has taken great initiatives and made great efforts at every stage of this project. Recalling that they watched the installation of pipes in a planned, technical and literally safe manner in the Çanakkale underwater section, which is one of the most critical technical legs of the TANAP project, Albayrak said: "Today we watched the installation of the 1,261st pipe, which a is really significant number. Within the scope of this project carried out via very successful team work, more than 80 percent has been completed together with TANAP management, as well as the Malaysian company and all the stakeholders."

He added that Azerbaijhani gas is expected in the European market with the completion of the Turkish leg next year and the Trans-Adriatic Natural Gas Pipeline (TAP) section in the first quarter of 2020. "Turkey will continue to work harder and more intensively than ever. I hope that it will be a beneficial project for both our country and world energy and gas markets. We always say do not stop, keep working," Albayrak said.

The first gas is to be transported to Turkey in June or July next year.

In the underwater section at a maximum depth of 65 meters, 3,100 concrete-covered steel pipes, each 100 millimeters, 80 millimeters and 60 millimeters in width and about 12 meters in length, are used. In the Anatolian land approach to the twin pipeline, pipes are laid at intervals of 5 meters. With the increase in distance on the open sea, the distance between the two pipelines rises to 100 meters, while the distance drops to 5 meters once again in the European land approach to the pipelines.

The pipes in the underwater section are connected to each other by welding stations on the vessel specially constructed for this purpose and then lowered to the bottom of the sea by means of a stinger mounted on the rear end of the ship. In the TANAP project, this work is carried out using the S-lay method, named for the "S" shape of the pipe segment between the ship's stinger and the seabed. This method is used mostly for underwater sections at a low depth.

When the pipeline, which will pass 19 kilometers through the Sea of Marmara, reaches Tekirdağ, Azerbaijani natural gas will enter Europe. However, this natural gas will completely reach European countries, its final destination, when the TAP, which forms the third leg of the project with a length of approximately 500 kilometers, is completed.

The foundations for TANAP were held in Kars on March 17, 2015, in a ceremony attended by President Recep Tayyip Erdoğan and his Azerbaijani and Georgian counterparts. Starting from Ardahan on the border of Georgia, the 1,850-kilometer TANAP will reach İpsala in Edirne on the Greek border after passing through 20 cities in Turkey.