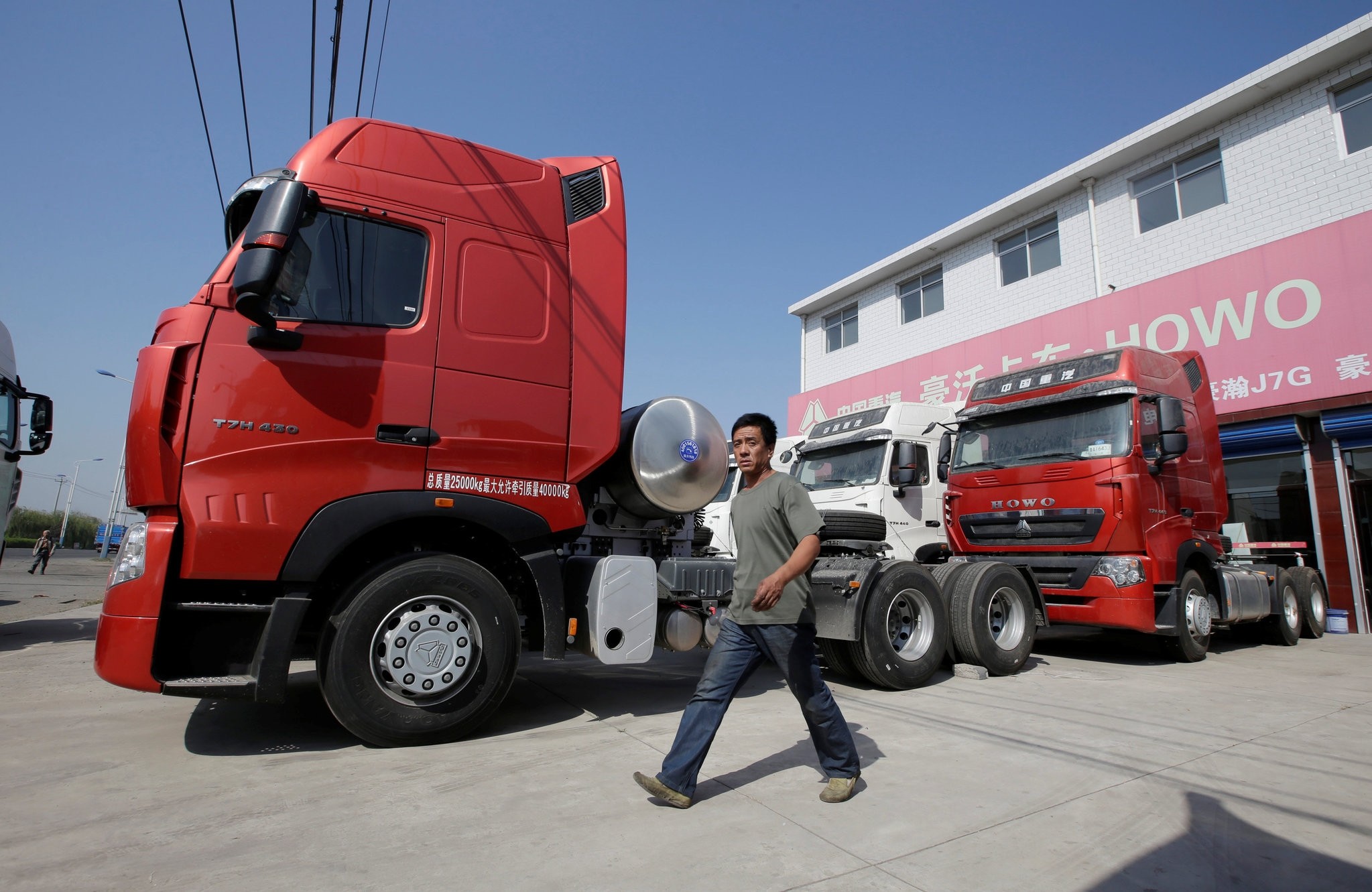 A man walks past liquefied natural gas (LNG) trucks for sale outside a heavy-duty truck shop in Yutian county, Chinau2019s Hebei province.
by Oct 09, 2017 12:00 am

On a recent morning in Yutian, a dusty town bisected by the highway that connects Beijing to the sea, Su Meiquan strolled into a dealership packed with hulking trucks and prepared to drive off with a brand new rig. After years of driving a diesel truck for a trucking company, he had decided to buy his own vehicle - a bright red rig fueled with liquefied natural gas, capable of hauling as much as 40 tonnes of loads like steel or slabs of marble. Su hopes the LNG truck - less polluting and cheaper to operate than diesel ones - will be the cornerstone of his own business, plying the route to the western fringes of China.

"Everybody says gas is cleaner with nearly no emissions," he said after signing a stack of paperwork in the dealer's office. In front of him, photos of proud drivers posing in front of their own new LNG trucks had been taped to the wall. Sales of large LNG trucks are expected to hit record levels in China this year as the government steps up an anti-pollution campaign that includes curbs on heavy-duty diesel vehicles. LNG trucks account for about four percent of the more than six million heavy vehicles able to haul 40 to 49 tonnes of goods that are currently on China's roads. The vast majority of the 43 billion tonnes of freight transported across China last year was by highway. But demand for LNG trucks is soaring as companies and manufacturers shift to vehicles that run on the gas that Beijing sees as a key part of its war against smog. Sales of LNG heavy trucks surged 540 percent to nearly 39,000 in the first seven months of the year, according to Cassie Liu, a truck analyst with the IHS Markit consultancy. That was partly fueled by a ban this year on the use of diesel trucks to transport coal at northern ports in provinces like Hebei and Shandong, and in the city of Tianjin.

"We are seeing a blowout in LNG trucks this year, thanks to the government's policy push," said Mu Lei, marketing manager for China National Heavy Duty Truck Group, known as Sinotruk, the country's largest manufacturer of heavy-duty trucks. The shift to gas trucks is helping fuel demand for LNG in China, as are other government measures aimed at clearing the air, especially in the north, which is shrouded in a hazardous coal-fueled smog for much of the winter. One major project is piping gas to 1.4 million households across the north for heating this winter, shifting away from coal. China, already the world's No.3 LNG consumer, has seen imports jump 45 percent so far this year.

Chinese companies like Jereh Group and ENN Energy Holding , which build LNG filling stations, and Zhangjiagang CIMC Sanctum Cryogenic Equipment Co., Ltd, which specialises in LNG tanks, are expected to benefit from the gas boom, analysts said. Government restrictions on cargo overloading last year, for safety reasons, has also driven truck sales as operators rushed to buy bigger trucks. Next month, Beijing will also impose restrictions on thousands of northern factories using diesel trucks, forcing many to use more rail and others to consider gas-powered lorries. Sales of new heavy-duty trucks, including diesel and LNG vehicles, jumped 75 percent in the January-August period to 768,214, according to industry website www.chinatruck.org.It did not break down the numbers, but companies say that diesel growth is being dwarfed by that of the LNG trucks. Last week, Sinotruk netted new orders for 1,371 heavy-duty trucks, 900 of which run on LNG, at an event bringing together coal transport companies from seven northern Chinese cities, Mu said. In the first half of this year, Sinotruk sold 5,200 LNG trucks, up 650 percent year on year.

China, the world's top energy guzzler, wants gas, which emits half the carbon dioxide as that of burning coal, to supply 15 percent of energy demand by 2030, up from 6 percent currently. Diesel costs between 10-30 percent more than gas on average currently at Chinese gas stations, according to truck companies.