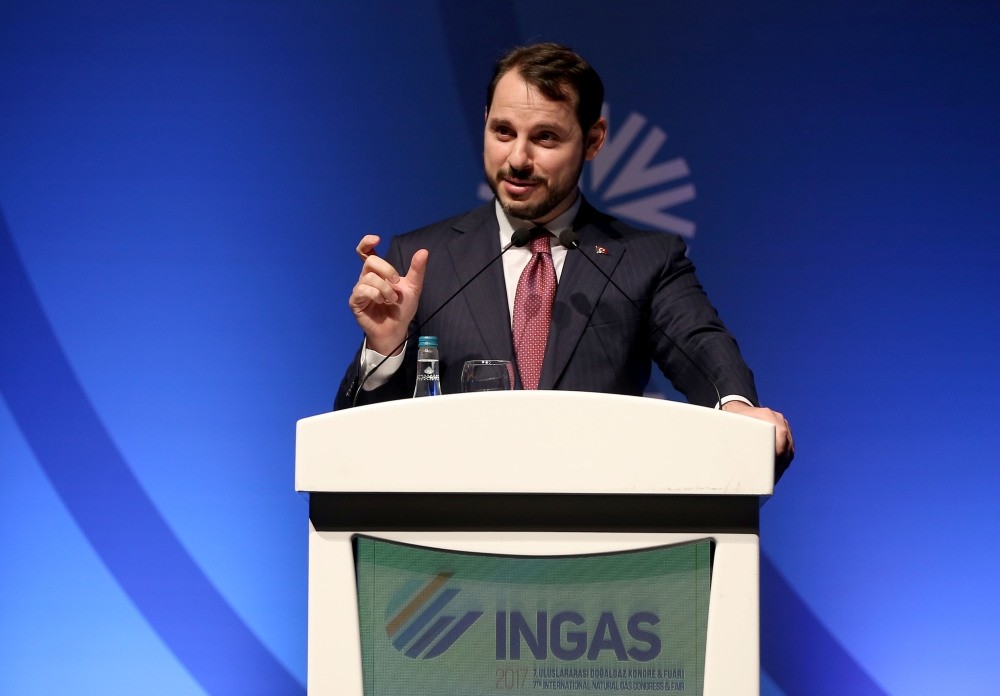 Energy and Natural Resources Minister Albayrak delivers a speech on Turkey's energy policy and goals at the 7th International Natural Gas Congress and Fair (INGAS) in Istanbul, Nov. 2.
by daily sabah
Nov 03, 2017 12:00 am

Elaborating on the significant steps taken in the expanding domestic energy market, Energy Minister Berat Albayrak stressed that a spot pricing market will be instituted to transform Turkey into a major energy hub

In accordance with Turkey's national energy policy, which stipulates the institution of an energy spot market where prices are set in accordance with market dynamics, the country is working to diversify its energy market by introducing alternative derivatives, Energy and Natural Resources Minister Berat Albayrak said. Speaking at the 7th International Natural Gas Congress and Fair in Istanbul, Minister Albayrak explicated Turkey's energy policy and emphasized the goal to build a developed spot market in the country, which aspires to become an energy hub, expanding beyond being a transfer bridge where energy is carried from producers to consumers.

To accomplish this aim, Turkey established an energy stock market known as Energy Exchange Istanbul (EPİAŞ or EXİST), in 2015, which began operating in the power generation sector with day-ahead and intraday power markets. The success and effectiveness of electricity companies trading on EPİAŞ led to the demand for a spot natural gas market to provide investors and gas companies with a reliable pricing mechanism and financial products with the trade of contracts and derivatives.

In the scope of Turkey's significant geographic location situated between energy producing countries and consumer markets such as Europe, Minister Albayrak emphasized that Turkey is far more promising in terms of being a very competitive spot gas market in which prices are determined by market dynamics, adding that the Trans-Anatolian Gas Pipeline (TANAP) will give further momentum to that ambition, reinvigorating the country's position as an energy hub which, in return, will allow Turkey to become a very powerful player in the energy market's future. The energy stock market is now preparing to start trading natural gas in April 2018. Sector leaders, exporters and governmental authorities have deemed it necessary for Turkey to become a liberal spot in the natural gas market, which ensures high competition between buyers and sellers as well as better pricing mechanisms.

Turkey, where there is an incrementally growing demand for gas and the European example of gas markets have given market players in the country - as well as authorities in the energy sector - a firm reason to believe that a spot gas market would empower Turkey in its negotiations with suppliers, is currently bound by long-term contracts.

For the market to operate efficiently, the diversification of resources is of high importance, Albayrak said, highlighting that market dynamics in the global energy market are now determined by buyers. "In a setting where buyers are more influential, Turkey is increasing its effectiveness in the global energy market through successful diplomacy," the minister said. These diplomatic negotiations, Albayrak noted, have yielded results in bringing down gas prices, and cheaper prices could further trigger industrial production and provide more employment, as energy is a significant raw material for the industry.

The minister also reiterated that the second liquefied natural gas (LNG) floating storage and regasification unit (FSRU) with a 20-million-cubic-meter capacity will be located in the Dörtyol district of southern Hatay next month. He also announced that the second phase of the Lake Tuz storage facility will be completed in 2019. As a result of these endeavors, Turkey will have a storage capacity exceeding 10 billion cubic meters per year and the goal is to store 20 percent of total gas volume to ensure supply security.

Responding to a news report by a Greek Cypriot newspaper claiming that Turkey's survey in the Mediterranean resulted in the natural gas field discovery, the minister slammed these reports, calling them politically manipulative. "Our two seismic vessels continue to conduct surveys at full speed. Hopefully, if we find any natural gas fields, I will be the first to give the news," he emphasized.

Regarding coal capacity, Albayrak informed that domestic coal reserves stand around $300 to $350 million and stressed the need for more effective ways to capitalize on this resource.

"We are launching a model that will increase production, employment and added value in all coal operations. The model will be purified from foreign currency. By expanding the purchase guarantee, feed-in-tariff, we will start using the long-term incentive and support mechanism for local coal by 2018," he announced. The Ministry is working to transform imported coal plants into local ones and encourage electricity purchases from these domesticated plants with the new model.