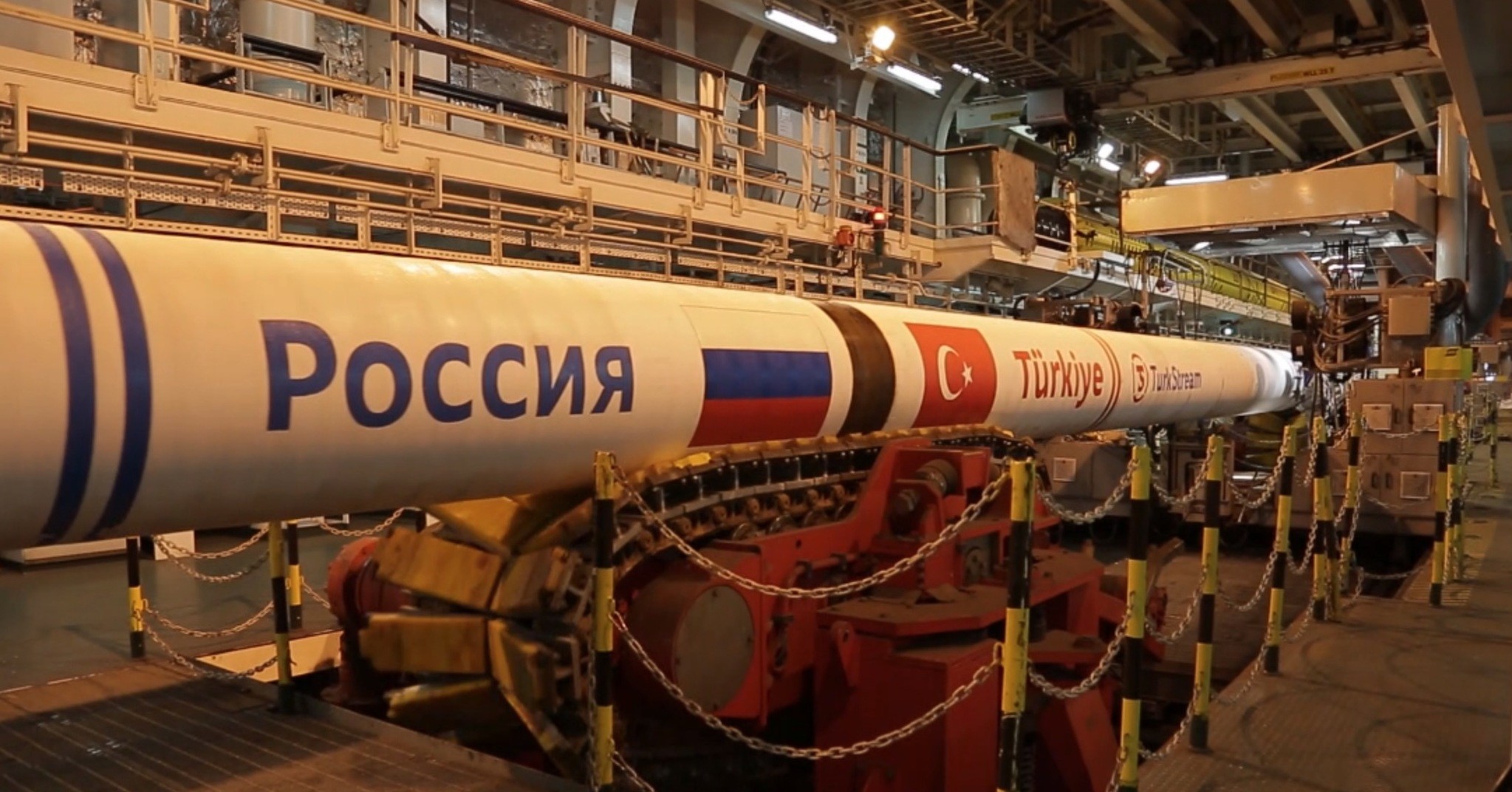 A successful example of Turkish-Russian energy cooperation, TurkStream, which will carry 31.5 billion cubic meters of gas per year, hit Turkey's exclusive economic zone as the pipe-laying operations on Russian soil were completed

The first pipeline of the TurkStream Offshore Gas Pipeline entered the Turkish exclusive economic zone (EEZ) on Nov. 4, the Russian natural gas giant Gazprom announced Saturday. The Pioneering Spirit, the world's largest pipe laying vessel, marked the occasion by laying on the seabed the section of the pipeline with Russian and Turkish flags, symbolizing the crossing of the EEZ border between the two countries, the company said in a press release. The vessel crossed the Bosporus and entered the Black Sea on May 31, and Russian Federation President Vladimir Putin officially started pipe laying on June 23 in the deep-water sections of the Black Sea.

According to the press release, the border crossing also marks completion of construction of the two offshore lines within the Russian EEZ.

"In total, 448 kilometers of the pipeline were laid down, equally divided over the two lines. Construction of nearly 25 percent of the offshore pipeline section has been realized in less than 6 months," read the statement.

After reaching the border of the EEZ with one line, the Pioneering Spirit returned toward Anapa to commence deep-water pipe laying with the other line. Allseas's vessel Audacia had already finalized the shallow water section for both lines in late July, said the company.

"Pioneering Spirit will now continue pipe-laying operations with one pipeline all the way close to the Turkish landfall. The two TurkStream pipelines will come ashore in Turkey near the town of Kıyıköy, which is located approximately 100 kilometers west of Istanbul," it said.

The average speed of pipe laying by the Pioneering Spirit is in excess of 4 kilometers per day, with a record set by the Allseas crew on Nov. 1, by constructing 5.15 kilometers of TurkStream pipeline in one day. Water depth at the EEZ boundary is approximately 2,171 meters, which is close to the deepest part of the TurkStream route (2,198 meters).

TurkStream will consist of two offshore pipelines, with a total capacity to transport up to 31.5 billion cubic meters of natural gas per year.

Turkish-Russian cooperation in natural gas began with the West Line more than three decades ago. After an agreement was signed between the two states, related work was commenced by the Petroleum Pipeline Corporation (BOTAŞ) and with the Natural Gas Usage Survey, which was conducted in 1985, the potential natural gas consumption and feasible route was determined. In this context, a 25-year Natural Gas Purchase-Sale Agreement was signed between BOTAŞ and SoyuzGazExport on Feb. 14, 1986, in Ankara. This line will expire in 2019 after TurkStream becomes operational.

The West Line passes through Ukraine, Moldova Romania and Bulgaria before it reaches Turkey, but Blue Stream transports Russian gas to Turkey directly with a capacity of 16 billion cubic meters (bcm) per year. The line provides natural gas to Turkey's eastern and central regions.

TurkStream, however, will directly transfer gas to western Turkey and will render the country a direct purchaser of Russian gas, discharging transit countries. The project also aims to carry Russian gas to Europe via Turkey, which is believed to strengthen Turkey's strategic position in the regional energy platform. According to Gazprom CEO Alexei Miller, the company will start construction on Turkish soil at the beginning of 2018 and plans to deliver first gas in 2019.

The offshore section of the project is being built by South Stream, a subsidiary of Gazprom. The 1,880-kilometer (940 kilometers each) double pipeline will originate from Russia's Anapa coast and reach Kıyıköy, Turkey.

Meanwhile, negotiations on the European section that will be built jointly by BOTAŞ-Gazprom were in progress. Currently, two primary routes are being discussed and the pipeline will either move toward Serbia and Hungary via Bulgaria and toward Italy via Greece or it will enter Europe via Bulgaria and Greece.

TurkStream was first proposed by the Russian president in 2014 during his visit to Turkey. But after the jet-downing crisis in November 2015 the project was suspended until relations started to normalize.

On Oct. 10, Turkey and Russia signed an inter-governmental agreement on construction of the planned TurkStream gas pipeline to compress Russian gas under Turkish waters in the Black Sea toward Europe. The agreement was signed by Energy and Natural Resources Minister Berat Albayrak and his Russian counterpart Alexander Novak, in the presence of Russian President Putin and President Recep Tayyip Erdoğan after talks in Istanbul as part of the 23rd World Energy Congress. According to Gazprom CEO Alexei Miller, in the second half of 2017, the laying of the pipeline in the Black Sea will begin. Moreover, Minister Albayrak previously announced that the construction of the first pipeline would be completed by 2019.