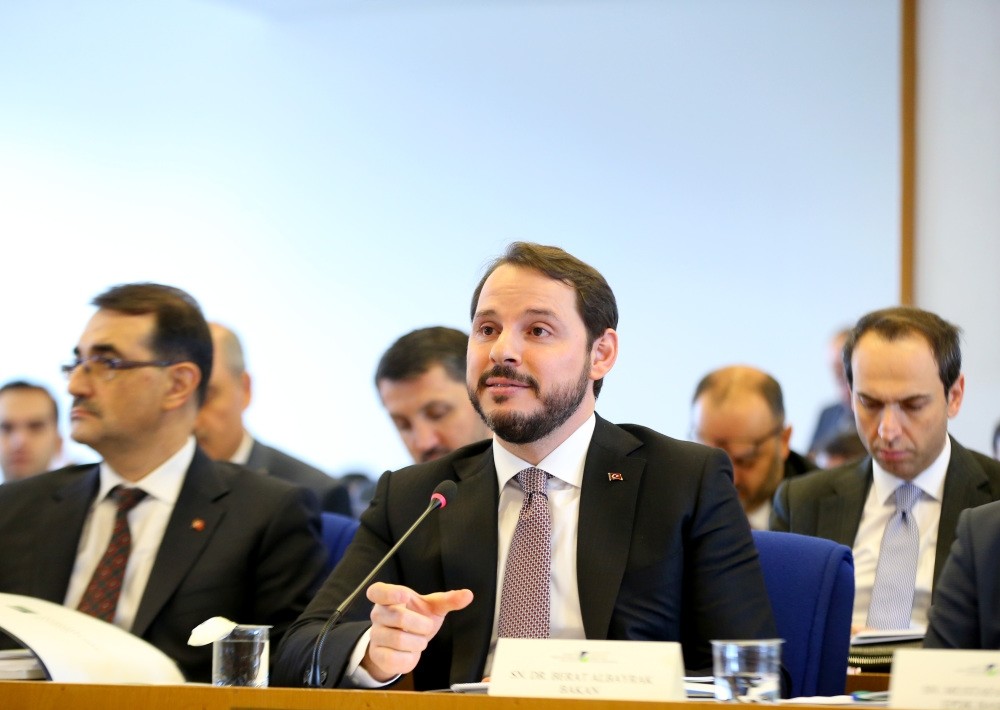 Energy Minister Albayrak delivered a presentation on the budget of his ministry at Parliament and explained the ministry's accomplishments and ongoing projects.
by Daily Sabah with AA Nov 21, 2017 12:00 am

In order to expand storage capacity in the face of increasing demand, Turkey is poised to operationalize two more liquefied natural gas (LNG) floating storage and regasification units (FSRU), with one to start operating by the end of the year. Elaborating on the course to follow for supply security, Energy Minister Berat Albayrak (L) underscored the goal to diversify energy resources and routes, expand drilling and seismic survey operations, strengthen energy infrastructure and prioritize energy efficiency.

Speaking at the 2018 budget negotiations of the Energy and Natural Resources Ministry at the Turkish Grand National Assembly (TGNA), Minster Berat Albayrak announced that two more FSRU facilities in Hatay Dörtyol and the Gulf of Saros will be operationalized, recalling that an FSRU was deployed in İzmir's Aliağa district last year. The FSRU in Hatay Dörtyol will have a daily regasification capacity of 20 million cubic meters and be operational by the end of the year. With the ongoing works on increasing storage capacity, the natural gas storage capacity will exceed 10 billion cubic meters. The cumulative storage capacity will be equal to 20 percent of the annual gas consumption, the minister informed.

Minister Albayrak highlighted that exploratory and drilling operations have been significantly expanded with a view to identifying the oil and natural gas reserves. He also underscored that increasing natural gas storage capacities and deployment of FSRU has reinforced natural gas supply security.

Elaborating on the multilateral natural gas project of which Turkey is a party, the minister noted that Trans-Anatolian Natural Gas Pipeline Project has been 94 percent completed by the end of September and the construction under the Dardanalles Strait continues.

The minister said the TANAP project will start delivering gas to Turkey in 2018 and to Europe in 2020.

With regards to the TurkSTream project in which Turkey cooperates with Russia, Minister Albayrak informed that the pipe-laying operations steadily continue and by Nov. 9, the pipes were laid on 248th kilometers.

"Considering the lack of a healthy natural gas market in Southeastern Europe and the size of our markey, TANAP and TurkStream projects will support our goal to achieve a natural gas trading hub in Turkey," Albayrak said.

Providing information on the developments of the storage facilities, Minister Albayrak said Lake Tuz Underground Natural Gas Storage Facility received first gas in January 2017 and the first phase of the project was prepared for gas deliveries in 2017 winter last year.

Power generation from renewable energyEnergy and Natural Resources Minister Berat Albayrak stressed that renewable energy comes to the fore among the energy strategies developed by Turkey and that renewable energy is of great importance in terms of contribution to transition to low carbon economy as well as providing supply security and resource diversity thanks to innovative approaches and new technologies developed. Minister Albayrak highlighted that projects on increasing electricity generation from renewable sources globally have gained momentum and informed that 66 percent of the globally needed electricity is generated from fossil fuels, while only about 24 percent of electricity is produced from renewable sources.

Albayrak underlined that steps have been taken to increase the use of wind, solar and geothermal resources, which were almost never used 15 years ago in electricity generation, noting that the installed power development rate of these resources have been much higher than the world average thanks to these steps.

Energy and Natural Resources Minister Albayrak noted that within 10 years, 10,000 megawatts of additional installed power will be commissioned for wind and solar power each.

He also stressed that nuclear energy is an important alternative to meet the rising electricity demand and to reduce the risks resulting from dependency on imported fuels.

Recalling that significant steps have been taken in the Akkuyu and Sinop power plants, and that the location studies for the third power plant are ongoing, Albayrak informed that the first two projects will have four reactors each and a total installed power of 9,280 megawatts. "With the nuclear power plants to be established, our country's electric energy portfolio will be expanded, and resource diversity will be increased," he continued. "In addition, the contribution of zero-emission nuclear energy to achieving climate change targets is important."

He pointed out that the first unit of the Akkuyu Nuclear Power Plant is aimed to be operational in 2023, adding that the ground survey and feasibility studies are underway for the project in Sinop.