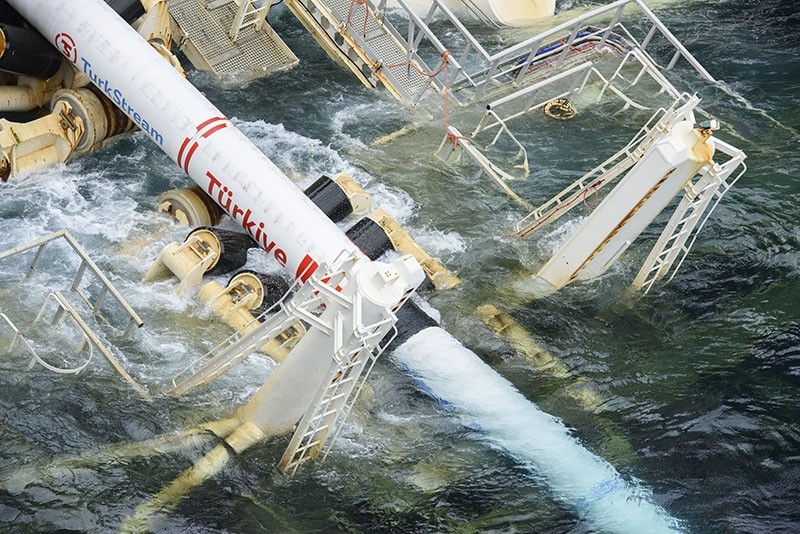 This file photo dated June 6, 2017 and provided by TurkStream shows a pipe bearing a Turkish flag to symbolize crossing into Turkey's Black Sea exclusive economic zone is being laid down by the offshore vessel Pioneering Spirit.
by Anadolu Agency Jan 05, 2018 12:00 am

The first line of the TurkStream natural gas project will reach the Turkish shore in May of this year and will be in service at the end of 2019, the project management team told Anadolu Agency in an exclusive interview on Friday.

With the aid of the world's biggest construction vessel, the Pioneering Spirit, the two parallel pipeline project, which consists of pipe production, offshore and onshore pipe laying and a receiving terminal, is set for a spring launch.

The first line is intended for the Turkish market, while the second targets gas supplies to countries in southern and southeastern Europe. South Stream, which is a subsidiary of Gazprom, the major Russian partner in the project, will build the offshore section of the project.

"It will be in May that the first line will reach the Turkish shore. After that, the vessel [Pioneering Spirit] will have another job. Then, it will return to the Black Sea to work on the second line of the TurkStream. We expect that it will return in the third quarter to the Black Sea and then continue with the launch," TurkStream's spokesman Sander van Rootselaar said.

According to van Rootselaar, the project's total capacity of 31.5 billion cubic meters of natural gas will meet the annual energy demands of 15 million households.

The project will be able to produce the equivalent of 126,000 wind turbines and 39 nuclear units.

"That's a massive amount of energy to be allocated to Turkish and European energy markets," van Rootselaar said.

Describing the project as "a very major contribution to energy security," he expects that with the project, Turkey will become a key supply link for southern and southeastern Europe.

Demand is rising in the European gas market at a time when domestic production is in decline, he said, and as a result, he affirmed that the TurkStream would play a significant role in southeastern Europe, particularly with some underdeveloped markets in the Balkans that could benefit from TurkStream gas.

These statistics from Gazprom covers the region of TurkStream's second line and, according to Gazprom, proves the validity of the project that will be able to cover this increased demand from TurkStream gas.

"It strengthens our conviction that we are building something that is actually valuable for these countries," he explained.

"Each offshore pipeline will be made up of over 75,000 individual pipe joints that are designed specifically for high-pressure gas transport," he said. The 12-meter-long pipes, which are manufactured for resilience and strength, weigh in at 9 tons and have a steel inner wall with a thickness of 39 millimeters.

Van Rootselaar confirmed that the construction of 700 kilometers out of a total of 1,860 kilometers of the two lines of the subsea section of the project had been completed.

With the advanced technology of the Pioneering Spirit, the vessel is equipped to deliver four kilometers of pipe laying daily even in harsh weather conditions and has also reached records of over 5 kilometers per day.

"We have seen that the speed of pipe laying of Pioneering Spirit is faster than we expected. It is the first pipe laying job of this vessel," he said.

"We have increased the number of supply vessels in order to supply enough pipes to deliver 4 kilometers each day and even with records of over 5 kilometers," he added.

He said that the company aimed to either eliminate or as much as possible minimize the project's impact on the environment specifically in the locality that covers the pipeline's route. This includes the area close to Turkish landfall near the town of Kıyıköy, located approximately 100 kilometers west of Istanbul.

"We restore the land to a pre-construction state to the best extent possible. Also, we support Kıyıköy's development through community investments," he said.

He added that environmental measures included relocating protected species away from the construction site, changing the pipeline route to protect the beach in Kıyıköy and also commissioning a study for the compensation of tree loss in permanent construction areas.

Van Rootselaar also noted that a joint venture between Turkey's state-owned crude oil and natural gas pipeline and trading company BOTAŞ and Gazprom would build the onshore section of the project that would extend to Europe via Turkey.

Greece and Bulgaria candidates for European part of project

The official said negotiations with Greece and Bulgaria for the European side of the project were ongoing and the parties were making good progress.

"There is a positive vibe surrounding the project," he said with Serbia and Hungary showing interest for participation at a governmental level.

"Before we deliver the first gas to Turkey at the end of 2019, a decision should be made about the second line," he added.