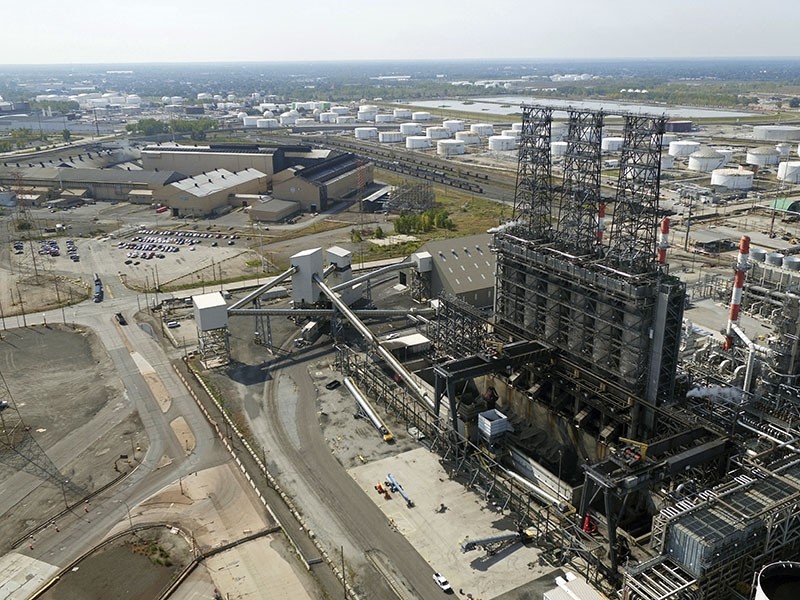 In this Sept. 21, 2017 file photo, petroleum coke, the grainy black byproduct of refining Canadian tar sands oil, is visible at the BP Whiting refinery in East Chicago, Ind. (DroneBase via AP)
by Associated Press
Jan 11, 2018 12:00 am

New York City is taking on the oil industry on two fronts, announcing a lawsuit Wednesday that blames the top five oil companies for contributing to global warming and saying the city will sell off billions in fossil fuel investments from the city's pension funds.

Democratic Mayor Bill de Blasio received immediate blow back from some of the companies, while winning praise from environmentalists and others.

"We're bringing the fight against climate change straight to the fossil fuel companies that knew about its effects and intentionally misled the public to protect their profits," the mayor said. "As climate change continues to worsen, it's up to the fossil fuel companies whose greed put us in this position to shoulder the cost of making New York safer and more resilient."

The city alleges the fossil fuel industry was aware for decades that burning fuel was impacting climate change.

The defendants in the city's federal lawsuit are BP, Chevron, ConocoPhillips, Exxon Mobil and Royal Dutch Shell. Three of the companies shot back against the mayor's accusations, while two others — ConocoPhillips and BP — declined to enter the fray.

"Reducing greenhouse gas emissions is a global issue and requires global participation and actions," said Exxon Mobil's Scott Silvestri. "Lawsuits of this kind — filed by trial attorneys against an industry that provides products we all rely upon to power the economy and enable our domestic life — simply do not do that."

Also Wednesday, de Blasio and Comptroller Scott Stringer said they intend to divest the city's five pension funds of roughly $5 billion in fossil fuel investments out of its total of $189 billion. They say the divestment is the largest of any municipality in the U.S. to date.

"Safeguarding the retirement of our city's police officers, teachers and firefighters is our top priority, and we believe that their financial future is linked to the sustainability of the planet," Stringer said.

Clara Vondrich of the DivestInvest campaign says the city joins a movement that started about six years ago. She says hundreds of institutional investors managing assets of over $5.5 trillion have taken their money out of fossil fuel investments.

Vondrich said other cities and entities selling off fossil fuel interests have included Berlin and Washington, D.C.; insurance companies Swiss Re, Axa and Allianz; and educational institutions such as the University of Oxford in Great Britain, Stanford University in California and Trinity College in Ireland.

Philanthropies have included the Wallace Global Fund and the Rockefeller Brothers Fund, notable because the late John D. Rockefeller grew his wealth as an oil baron.

Kyle Isakower, vice president of the American Petroleum Institute, has previously said that divestment is a "tactic of misinformed activists" that is "incompatible with job creation, affordable energy, and economic prosperity." The industry group's New York executive director, Karen Moreau, accused him of hurting pension holders in "a disgraceful way to score cheap political points."

Linda Kelly, senior vice president and general counsel of the National Association of Manufacturers, a trade group, called the lawsuit a stunt.

"Ironically, this attack on energy manufacturers comes at a time that New Yorkers have depended on natural gas and heating oil to carry them through the recent extreme cold," she said. "The mayor's announcement may raise his profile, but it will do nothing to address climate change and will ultimately fail."

Longtime environmental activist Bill McKibben called the actions by the city "one of a handful of the most important developments" in the past 30 years. "The mightiest city on the planet has now sort of walked into a real fight with the richest and most irresponsible industry on the planet," he said.