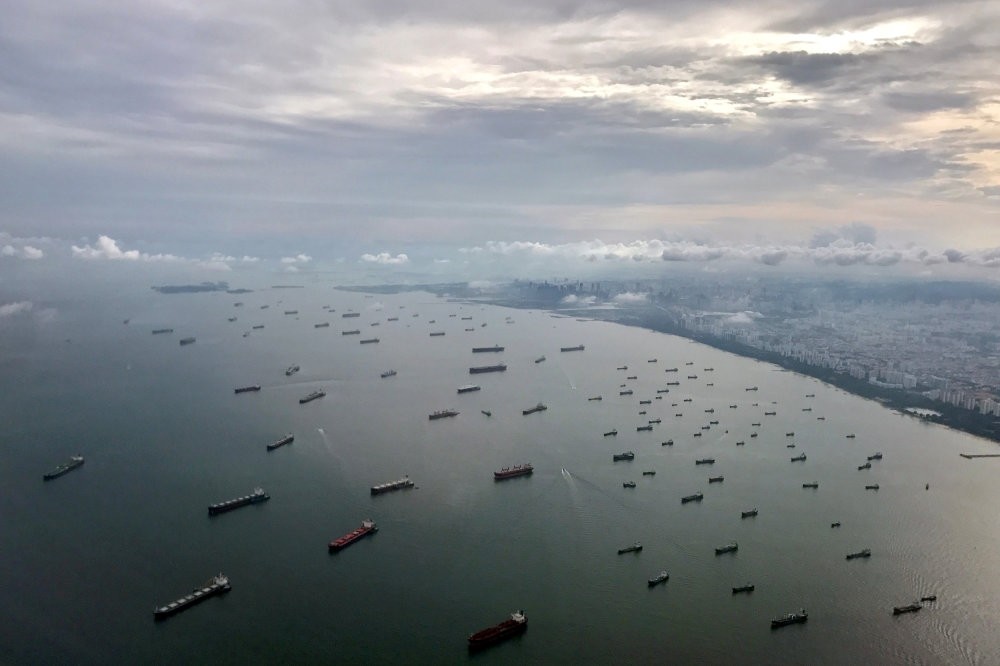 Smugglers are said to be taking advantage of a triangle of sea between Thailand, Vietnam and Signapore and encompassing the oil facilities of Malaysia, as it is very difficult to patrol the area due to sea traffic, which results in fuel being sold on the black market

An alleged oil heist in Singapore that has already led to 20 arrests, the seizure of at least one tanker and allegations that thieves siphoned thousands of tonnes of fuel from Shell's biggest refinery is shining a spotlight on an illegal trade worth tens of billions of dollars worldwide.

Working routes in a triangle of sea anchored by Thailand, Vietnam and Singapore and encompassing the oil facilities of Malaysia, the smugglers take advantage of a difficult-to-patrol sea and enticing black market prices, experts say.

The suspects in the latest case are accused of stealing oil from Royal Dutch Shell's Pulau Bukom refinery, often during business hours, and distributing it around the region.

Several of the men charged worked for Shell. Employees of a major Singaporean fuel trading company and a London-listed business that inspects and certifies cargos have also been charged.

"Siphoning off fuel is a common thing in Southeast Asia. There is a huge black market for it," said Ben Stewart, commercial manager of the shipping security firm Maritime Asset Security and Training, which has helped authorities in the region fight fuel theft and smuggling.

In most cases, oil is discreetly siphoned from legal storage tanks and sold into the black market. But there have also been thefts at sea and even hijackings of entire ships to steal their fuel.

Data from the Regional Cooperation Agreement on Combating Piracy and Armed Robbery against Ships in Asia (ReCAAP), based in Singapore, shows more than half of the serious shipping incidents reported in the past year have occurred off the east coast of the Malaysian peninsula.

Some officials put the value of the illegal trade in Southeast Asia at $2 billion to $3 billion per year. But Yousuf Malik, principal at security consultancy Defence IQ, estimated about 3 percent of Southeast Asia's consumed fuel is sourced illegally, worth $10 billion a year.

"The scale of the illegal oil trade varies with oil prices - when oil prices are high, so is the level of smuggling," said Praipol Koomsup, former Thai vice minister of energy and professor at Thammasat University.

Crude oil prices have risen by more than 50 percent since mid-2017 to about $70 per barrel, the highest level in over three years. That increases the black market demand in poorer Southeast Asian countries, including Vietnam and Thailand.

"Smuggled oil has been known to be sold to factories for industrial use, or unnamed roadside oil stations. Regular citizens and fishermen are involved in the smuggling," Koomsup said.

Several fuel traders told Reuters that the illegal sale of fuel is common enough that companies plan for losses of 0.2-0.4 percent of ordered cargo volumes.

Stewart said one common method of theft involves a simple fudging of paperwork at sea: captains overstate how much fuel their ship is using, then sell the excess.

Sometimes entire ships are captured for their fuel cargo.

When fuel is stolen on such a large scale, it tends to be transferred to other ships at sea.

Legal ship-to-ship transfers frequently happen between oil tankers in registered zones. In the South China Sea, however, illegal traders use purpose-built ships - with some even disguised as fishing trawlers - to take in and distribute fuel.

According to ReCAAP, the waters around the remote Natuna Islands, which sit between peninsular Malaysia and Borneo but belong to Indonesia, are a hot spot for piracy and illegal fuel transfers.

The Atlantic Council, a policy research group, said many of the region's illegal fuel operations had links to organised crime.

Police in Thailand and Vietnam said most illegal fuel comes into the country by sea, usually transported on mid-size trawlers in unmarked drums. Smaller vessels then bring the fuel ashore for sale on the street.

Thailand and Vietnam are vast, and its cities big. To catch or even trace the illegal fuel in this area is virtually impossible. That's why it happens," said one security source, speaking on the condition of anonymity as he was not cleared to talk to media about contraband operations.

Bukom, just south of Singapore, is an island serving just one purpose: 1.5 square kilometers (0.6 square miles) of tropical land devoted to the biggest petroleum refinery owned by Anglo-Dutch Shell. It can process 500,000 barrels of crude oil per day.

As global markets were gearing up for a new year in early January, Singapore authorities conducted coordinated raids across the city-state, arresting 20, charging 14 Singaporean and Vietnamese men, and seizing millions of dollars in cash. They even confiscated an oil tanker.

At the heart of the police operations is Bukom, where suspects, including current and former Shell employees, are accused of stealing oil worth millions of dollars in the past six months.

Singapore's biggest marine fuel supplier, Sentek, last weekend saw its marketing and operations manager, as well as a cargo officer, charged in connection with the case.

Another person charged works for Intertek in Singapore, a British-listed company specialising in quality and quantity assurance, including for fuel products.

In a statement to Reuters, Shell said, "Fuel theft is an industry problem globally and not something that anyone can solve on their own." The company added that it was working with governments and ReCAAP to address the issue.

A lawyer representing one of the accused men said he had not yet had opportunity to obtain instructions from his client. Lawyers for some of the others charged were not immediately available for comment.

Between ports, the tanker often switched off its transponder, which every merchant vessel is required to carry.

The scale of the theft was big enough that Shell did not think it could handle the case internally. Instead, in August the company contacted authorities, triggering one of the biggest police operations in Singapore in years.

Police investigations are ongoing. The charges in court documents allege the suspects in the Singapore case stole over $5 million worth of oil. Globally, oil theft could be worth as much as $133 billion, said Malik of Defence IQ. "Its sheer scale and the flows of illicit cash related to oil and fuel theft and smuggling exacts a toll on virtually every aspect of the economy," Malik said.