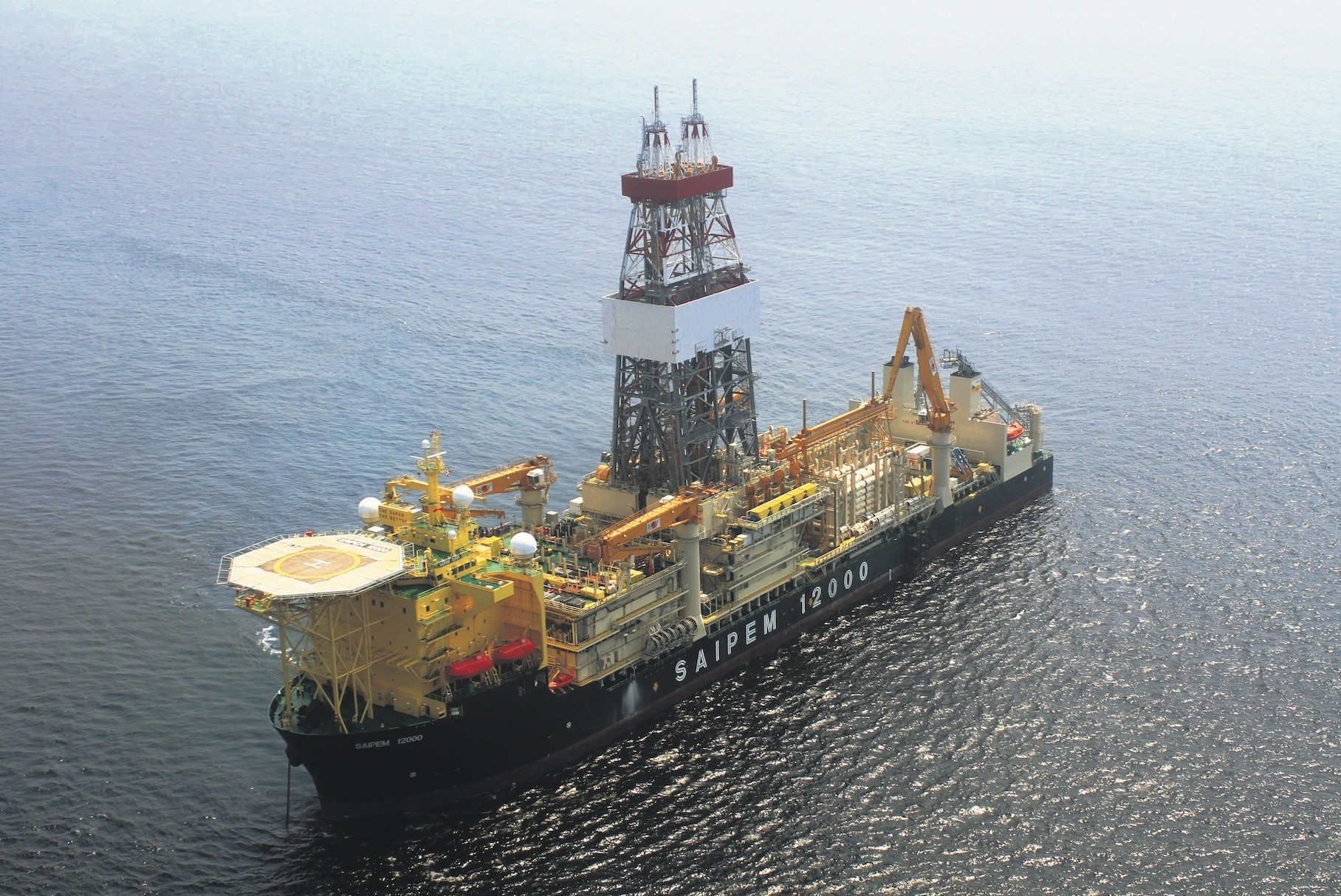 Turkish warships blocked a rig by Italian energy company ENI in Eastern Mediterranean where Greek Cyprus unilaterally granted a drilling and exploration license to the Italian company.
by daily sabah Feb 14, 2018 12:00 am

Hydrocarbon sources in the Eastern Mediterranean have ignited diplomatic spats between Turkey and the EU, Greece and Greek Cyprus after Turkey sent a warship to the region on Friday, but Turkey continues to remain within the boundaries of international maritime law

Turkey's blockade of Italian energy firm ENI's rigging operations in the Eastern Mediterranean to explore hydrocarbon resources has echoed in the Greek Cypriot administration, Greece and the European Union. The escalating diplomatic lambasts, however, blur the issue of legality while ignoring the sovereign rights of Turkey and Turkish Cyprus on the natural resources in the Eastern Mediterranean. Energy and Natural Resources Minister Berat Albayrak emphasized that Turkey will not allow the spread of ignorance toward and violations of Turkish Cyprus's rights and will exercise its legal rights to the fullest extent.

Over the recent days, the hydrocarbon resources in Eastern Mediterranean have again ignited dispute between the Greek Cypriot administration, Greece, the European Union and Turkey. Following the Italian energy firm ENI's rigging operations after the company announced discovery of natural resources with its French partner Total in the area which is called the 6th Block in the so-called exclusive economic zone unilaterally declared by the Greek Cypriot administration. Seeing the matter as a violation of rights of Turkish Cypriots, Turkey sent its warships to the area blocking the Italian ENI to start searching for gas.

Speaking at a ceremony in Ankara, Albayrak highlighted Turkey's robust determination to continue protecting its sovereign rights and the rights of Turkish Cypriot people in the eastern Mediterranean region. "Turkey will not allow any parties to neglect or ignore Turkish Cyprus and its citizens and will exercise its rights bestowed by internationally acknowledged laws." Albayrak also stressed that Turkey will conduct efficient energy diplomacy and politics in the region.

National Union Party Member of Parliament Sunat Atun, former economy and energy minister, told Daily Sabah that Turkey is protecting its rights derived from international maritime law by sending warships to the region. According to the international maritime law, he said national territories have a continental shelf up to 200 miles while the islands have territorial waters extending up to 14 miles. "The so-called 6th Block, within this territory, falls within the limits of Turkey's 200-mile continental shelf," he underscored.

"By unilaterally declaring an exclusive economic zone and granting licenses to international energy firms without due consideration of the rights of the Republic of Turkey and Turkish Cypriots, the Greek Cypriot administration is trying to usurp Turkey's territorial rights," Atun added.

Speaking at the Justice and Development Party (AK Party) parliamentary group meeting, President Recep Tayyip Erdoğan criticized Greece on the issues of the unilateral offshore hydrocarbons search by the Greek Cypriot administration. President Erdoğan stressed that Turkey closely follows the interventions in the territorial waters of the island, casting a warning against the international community.

Erdoğan addressed the international energy companies that operate on the offshore island and emphatically stressed that Turkey does not differentiate the Cyprus issue from Afrin; it attaches the equal importance. So, the illegal interventions do not go unnoticed on Turkey's agenda, he said.

The Turkish Foreign Ministry released a statement earlier this week saying that the Greek Cypriot Administration is jeopardizing the security and stability of the Eastern Mediterranean. "The Greek Cypriot side is responsible for any consequences that possibly ensue from pursuing unilateral hydrocarbons operations without giving up acting as the island's sole proprietor and makes efforts to ensure a fair, lasting and comprehensive solution in Cyprus," the statement said.

The Greek Foreign Ministry made a statement earlier yesterday claiming that Turkey is violating international law in the Eastern Mediterranean. "We urge Turkey to refrain from further unlawful activities and comply with its commitments as they emanate from international law," stressed the statement.

About this issue, the leader of the Greek Cypriot administration, Nikos Anastasiades, made a phone call to Donald Tusk, head of the European Council, about Turkey's reaction to the unilateral hydrocarbons search by the Greek Cypriot administration. Tusk called on Turkey to avoid threats or actions against any EU member and instead commit to good neighborly relations, peaceful dispute settlement and respect for territorial sovereignty.

Touching on the issue, Deputy Prime Minister Hakan Çavuşoğlu answered questions about the recent Greece tensions on TV Monday night, saying that Greece can benefit from keeping good relations with Turkey. "Turkey is not a threat to Greece. Turkey has been conducting a policy that tries to maintain good relations with neighbors and it does not intervene in other countries' territorial integrity, let alone tread over their border security," he said.

ENI and Total have made a promising gas discovery in the Eastern Mediterranean that confirms that the Zohr-like play where ENI found the biggest gas deposit in the Mediterranean offshore Egypt extends into the offshore territorial waters of the island, which the Greek Cypriot administration supposedly calls the Exclusive Economic Zone.

The Saipem 12000 rig was stopped Friday by Turkish military ships and told not to continue "because there would be military activities in the destination area," an ENI spokesperson said. "The vessel has prudently executed the orders and will remain in position pending a development in the situation."

Tensions escalating with an exchange of warnings and lambast emphasize the urgency of the matter to institute a resolution on the island split between Turks in the north and Greeks in the south.

Meanwhile, Turkey's first drillship, the Deepsea Metro 2, arrived to the country by the end of December, according to Monday's shipping data, with exploratory offshore drilling in the Mediterranean to begin in early 2018.

Political uncertainty must be resolved for fair share of resources

The politically unresolved situation in the ethnically-split island of Cyprus escalates tension as the discoveries of natural gas resources announced by international energy firms that are one-sidedly granted exploration and rigging license without consideration of the sovereign rights of the Turkish inhabitants of the island. Therefore, the legal status of the Turkish Cypriot administration and the offshore territorial waters must be resolved with the support of the international community.

"The ongoing dispute between Cyprus and Turkey is heating up, as Turkish navy forces are interfering, some even say threatening, the offshore exploration efforts," Dr. Cyril Widdershoven, founder and director of the Dutch-based Integrated Risk Consultancy firm Verocy told.

Highlighting the importance and urgency to institute a political resolution, he said, "NATO is also able to play a role here, as both Cyprus and Turkey are NATO members, with even British forces still in Cyprus. This should be solved or, without any doubt, the legal position of the offshore exploration and drilling should be made clear," reminding that the international community does not support the Turkish Cypriot issue.