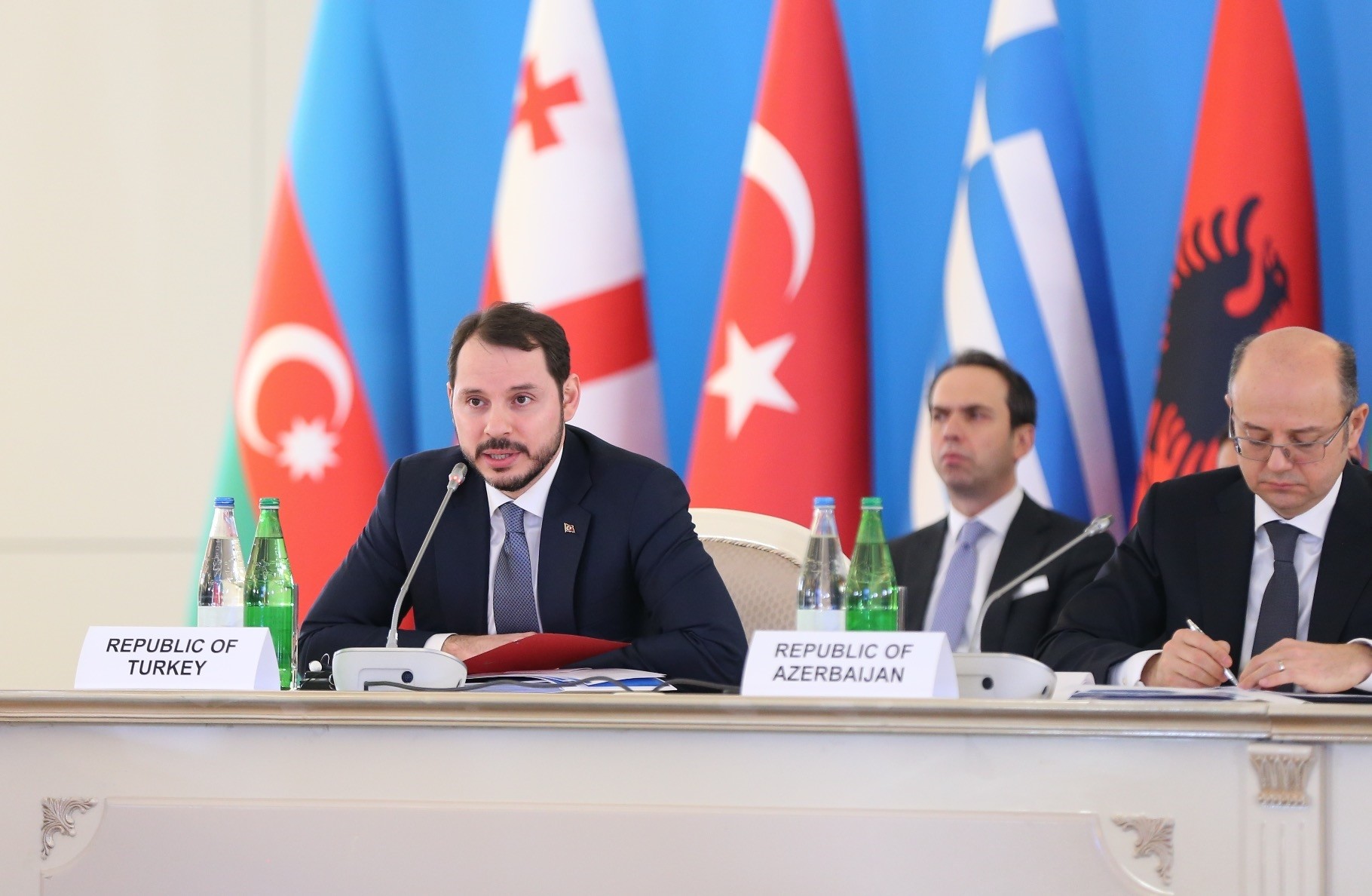 Energy Minister Albayrak delivers a speech at the 4th Ministerial Meeting of the Southern Gas Corridor Advisory Board, Baku, Azerbaijan, Feb. 15, 2018.
by daily sabah
Feb 16, 2018 12:00 am

Energy Minister Albayrak stressed Turkey's importance in the transfer of hydrocarbons from the Caspian and Mediterranean Seas to Europe via TANAP, ensuring the country's role in the continent's energy supply security

Energy and Natural Resources Minister Berat Albayrak met with the representatives of the Southern Gas Corridor (SGC) participant countries in Baku yesterday. Delivering an opening speech at the meeting, Minister Albayrak announced that the construction of the important stages of the Trans-Anatolian Natural Gas Pipeline (TANAP), which is the longest route in the SGC, has been completed and the tests have already begun.

The pipeline will start operating before July, Albayrak said, and explained the strategic location of Turkey for the transfer of natural resources in the Caspian and Mediterranean to the huge target markets like Europe.

During his speech at the Fourth Ministerial Meeting of the SGC Advisory Board in Azerbaijan's capital Baku, Energy Minister Albayrak said, "Just as Turkey is of great importance for the transportation of the natural resources in the Caspian to the world markets through TANAP and TAP, it is also the most reasonable and rational alternative in terms of transporting the natural resources in the Eastern Mediterranean to the European and the world markets." He urged all international parties to use these opportunities well and to apply the win-win method instead of the tensions that will further increase conflict and uncertainty in the region.

Noting that the important phases of the SGC, consisting of the South Caucasus Pipeline, TANAP and the Trans-Adriatic Pipeline (TAP), have been completed, Albayrak said with an investment of more than $45 billion, the project has created a huge value chain from production to the final consumer.

Albayrak said TANAP's first test work started last month and that the line will be opened before July.

Stressing that TANAP is an important and vital project in terms of Turkey's energy supply security and the National Energy and Mining Strategy, Albayrak said they have taken important steps toward the supply security in the last two years.

Albayrak pointed out that there have been significant developments in the Eastern Mediterranean in the recent period. Underlining that the Republic of Turkey is determined to use all rights stemming from international law until the end especially in the Eastern Mediterranean, Albayrak said they are committed to demonstrating a more effective seismic and drilling activity in the maritime jurisdictions in the coming period.

Minister Albayrak stated that Turkey will be the supporter and advocate of the rights of the Turkish Republic of Northern Cyprus (TRNC) and Turkish Cypriots, and that it has followed a policy that takes responsibility for a constructive and fair solution with common sense on the Cyprus issue since the first day, adding that especially in the framework of the Annan Plan, Turkey has taken very important steps in the United Nations Platform for achieving a effective and fair solution in this process.

"Turkey's peace and tranquility-oriented approach should never be seen as passivity," Albayrak continued. "Despite this approach applied for the peace and well-being of the parties on the island, the picture we encounter today is a politique de faite accomplie. If the Turkish Cypriots are to be ignored in sharing the wealth of the island, Turkey will stand against it till the end."

Albayrak stressed that the Greek Cypriot Administration's unilateral and internationally incompetent parceling struggle is unacceptable, suggesting that the Turkish Cypriots have equal rights over the natural resources of the island.

Albayrak said for natural resources in the region, particularly in the Eastern Mediterranean, Turkey is the primary and biggest market, as well as a major route in terms of transporting the energy resources to Europe, adding that it has not seen Europe's energy supply security separate from its own.

Noting that the SGC, consisting of Şah Deniz II, the South Caucasus Pipeline, TANAP and TAP, is an important project for Azerbaijan's energy strategy, Aliyev said with this pipeline not only Azerbaijani natural gas, but also the natural resources of the Eastern Caspian countries will be transported.

Aliyev said the signing of TANAP with Turkey in 2012 was an historical event with benefits for all parties involved, underlining that the regional cooperation established between Azerbaijan, Turkey and Georgia many years ago now turns to a more comprehensive cooperation with the participation of other countries.

Aliyev stated that they have a sufficient amount of natural gas reserves. "Our proven natural gas reserves are 2.6 trillion cubic meters. But we guess it is more than that," he said. "Azerbaijan will be a reliable partner to bring energy resources to the world market. The SGC is an energy security project." Albayrak represented Turkey at the meeting attended by the officials from the EU, Georgia, Bulgaria, Italy, the U.S., Montenegro, Albania, Croatia, Greece, Turkmenistan and Romania.