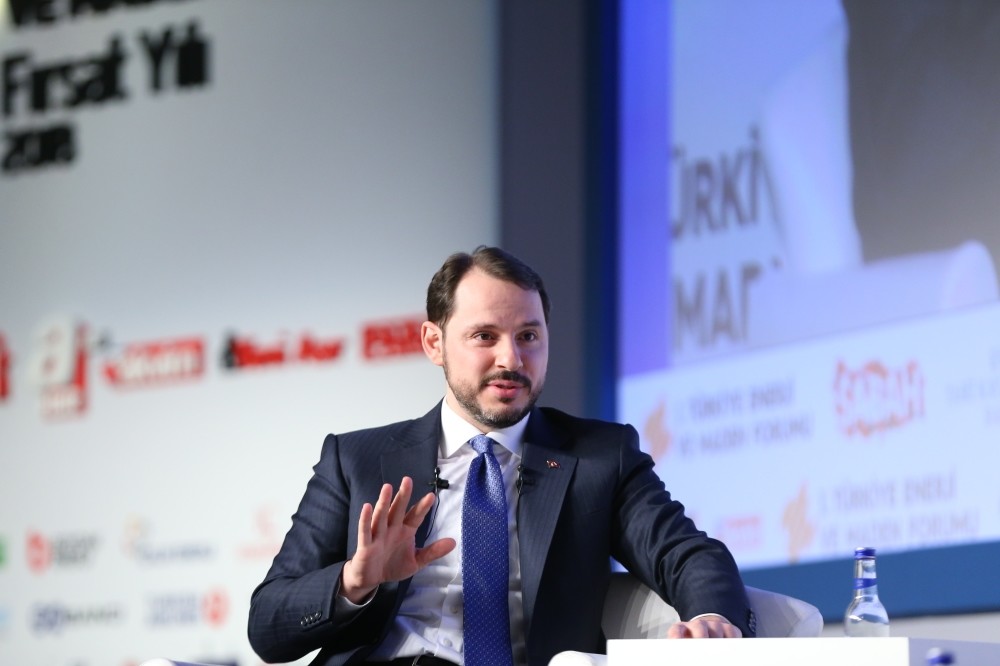 Energy Minister Albayrak speaks at the first Energy and Mining Forum, announcing energy projects that will be carried out in the near future, Istanbul, Feb. 22.
by Daily Sabah Feb 23, 2018 12:00 am

Dedicated to increasing the share of renewables in power generation to reduce dependency on imported resources, Turkey is now preparing another groundbreaking project for offshore wind power farms

In recent years, Turkey's energy sector has seen groundbreaking developments, particularly in expanding the capacity of renewable energy resources, including solar, wind and hydroelectricity. This, in return, resulted in raising the share of renewables in power generation to 32 percent in the third quarter of 2017. Focused on expanding renewables' capacity to decrease external dependency in energy, Turkey is now preparing the world's largest offshore wind power plant project, Energy and Natural Resources Minister Berat Albayrak announced yesterday at the first Energy and Mining Forum. Albayrak also said bids for the project contract will start this year.

The first "Turkey Energy and Mining Forum: The Year of Opportunity 2018," organized in cooperation with the Sabah newspaper, A Haber news channel, Takvim and Yeni Asır dailies and Para magazine under the auspices of the Energy and Natural Resources Ministry was held at the Istanbul Lütfi Kırdar International Convention and Exhibition Center on Feb. 22. The event gathered industry leaders from the public and private sectors to discuss the opportunities in Turkey's energy sector and included announcements for the new energy projects the country will undertake this year. Elaborating on Turkey's current and future energy projects, Albayrak said one of the projects the ministry is planning is the world's largest offshore wind farm.

"In wind power, we are preparing a project that stipulates the establishment of the largest wind power farm in the world, which we believe will create far-reaching echoes across the globe," Energy Minister Albayrak said.

Since wind power has more potential in offshore areas compared to land, Turkey is looking to seize the opportunity it has with coasts along the Aegean, Mediterranean and Black Seas.

In addition to the offshore wind power farm project, Turkey will continue its renewables investments with new Renewable Energy Resources Area (YEKA) contracts in solar and wind power this year.

"The work on the new YEKA contracts for which bids will be collected this year has begun. Our ministry has initiated the process for wind and solar power projects, each with a capacity of 1,000 megawatts," Albayrak said. "This year's YEKA contracts will include battery production and storage issues in the specifications."

He also said that the plan is to accomplish solar and wind power projects with a capacity of 10,000 megawatts within the next 10 years. "If the preparatory work is completed around March or April, we will collect bids during the spring," Albayrak said. He added that the ministry will conclude the contracting for these two YEKA projects by the end of the summer.

With Turkey's new mining model, Albayrak said they have prepared the necessary infrastructure to move the industry to world standards.

"We will carry out important moves in boron mining this year. We have created a team of experts who have worked in competent and important institutions in the world. Within the scope of transforming boron into a value-added and strategic product, we will make announcements about the groundbreaking process of two or three important facilities this year. We will cooperate with local and public defense firms in this process."

He also said he met with Iraqi Oil Minister Jabar al-Luaibi on Wednesday, adding that the meeting was not based only on oil and gas pipeline projects, but also cooperation development in different fields.

Albayrak said Turkey employs human-centered diplomacy in the region based on the win-win principle, especially after the failed coup attempt of July 15, 2016.

Energy diplomacy, just like the economy, has a great influence on foreign affairs, Albayrak said.

He said that the effective policies implemented in the Eastern Mediterranean and elimination of terrorist threats in southeastern Turkey have been important steps for the country's energy sector. He announced that Turkey is going to start very intensive land-drilling in the southeastern region for mines.

"The status of the Turkish Cyprus in the Eastern Mediterranean and the people there are extremely important," Albayrak said. He criticized the unilateral politics carried out in the region by Greek Cyprus, and that the rich resources around the island belong to all Cypriots, adding that Turkey has taken its position there. "We have to be active as long as a concrete and rational solution is not produced. If one-sided drilling is being carried out, Turkey will not allow it," he added.

Saying that Turkey was one of the countries with the most intense pipeline traffic in the world, Albayrak added that the official opening ceremony for the Trans-Anatolian Natural Gas Pipeline Project (TANAP), for which test operations have already begun, will take place this coming June or July.

Turkey's capacity in natural gas storage and liquefied natural gas (LNG) is gradually increasing, Albayrak said, indicating that there is a move toward a natural gas market with stronger recipients. "With its infrastructure in natural gas, Turkey will become a country that exports energy in the next 10 years," he added.

Albayrak also announced that drilling operations for oil and natural gas exploration in Turkey will begin this year. "2020 will see a drastically different period in exploratory activities in Turkey. With global partnerships, trained engineers and developed exploration methods, we have started to map out some regions," he said.

He said that Turkey's seismic vessels are capable of carrying out mining surveys.

"In mining, the plan is to drill at least 5 million in 2020. Turkey's geochemistry and geophysics maps are almost complete. This year, we will drill 2 million and we will gradually raise the drilled areas to 5 or 6 million and create various mines," Albayrak said.