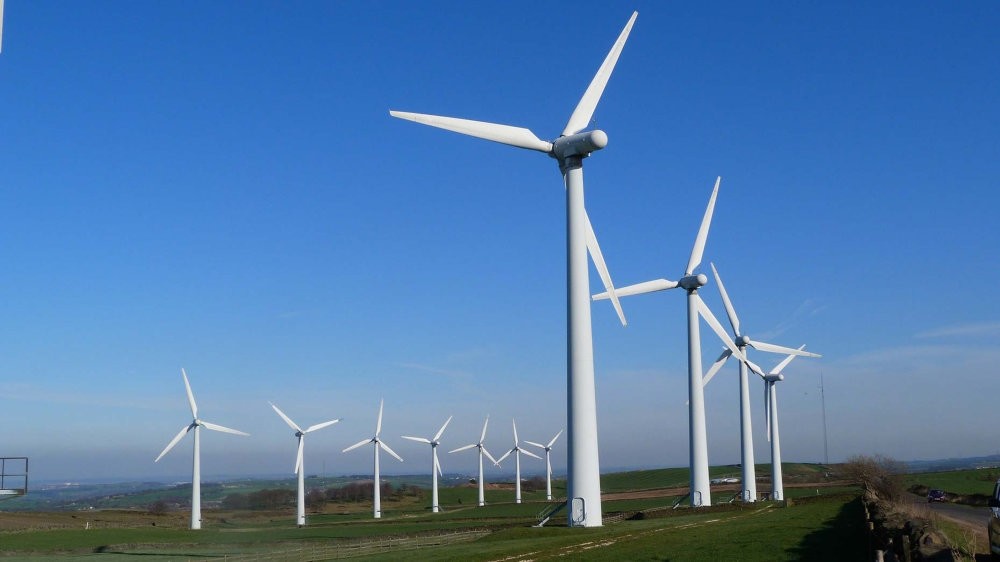 On Thursday, Energy Minister Albayrak shared the news of a groundbreaking project in the energy sector, announcing plans for Turkey's first and the world's largest offshore wind power farm in the Aegean Sea due to their high potential and efficiency

Energy and Natural Resources Minister Berat Albayrak announced that the ministry will hold a tender for Turkey's first offshore wind power plant to be carried out within the framework of the Renewable Energy Resource Areas (YEKA), and the wind farm will be the largest of its kind in the world. The announcement came at the First Energy and Mining Forum: The Year of Opportunity 2018, organized in cooperation with the Sabah newspaper, the A Haber news channel and the Takvim and Yeni Asır dailies and Para magazine, under the auspices of the Energy and Natural Resources Ministry and held at the Istanbul Lütfi Kırdar International Convention and Exhibition Center on Feb. 22.

According to information from sector leaders, considering the seas surrounding Turkey, the first offshore wind power plant, which are generally installed at a depth of 20-50 meters, are expected to be near-shore farms.

The wind power farm will be established in the Aegean Sea. Energy Minister Albayrak said bids for the world's largest offshore wind power plant will be collected this year in another round of Turkey's YEKA projects and that specifications for the tender will be clarified in the spring.

The optimum locations are the continental shelf of Çanakkale's Bozcaada (Tenedos), offshore Gökçeada (Imbros), the Gulf of Saros and Black Sea coasts of Thrace due to their high potential.

In particular, 7,000 megawatts (MW) of installed power have been achieved over the last 10 years. This huge development, Yıldırım said, provides Turkey with the necessary knowledge and experience needed for future projects.

"YEKA projects will not only increase the installed power, but will also trigger industrial developments. I consider the plans for the offshore wind power farm project a very positive initiative to ensure energy transformation in the mid-run," he said, adding that Siemense Gamesa established the world's first offshore wind farm in 1991. Siemens Game's installed power in offshore wind farms exceeds 11,000 MW. Yıldırım also stressed that Siemens Gamesa may contribute to Turkey's offshore projects with its 30 years of industrial experience.

Turkey has potential for 32,000 MW in offshore wind powerEuropean Wind Energy Association (EWEA) Chief Executive Officer Giles Dickson said 13 percent of wind power generation in Europe is supplied by offshore plants. While the installed power of offshore plants increases, the cost of power generation falls, Dickson said. "Three years ago, the feed-in-tariff per megawatt-hour was 150 euros in tenders. Now the figure has fallen to 60 euros. Capacity factors in new offshore wind power farms are generally above 50 percent," he added.

The EWEA head highlighted that the Turkish economy, which has already benefitted from wind power, will further enjoy offshore wind power farms with its existing transmission and distribution infrastructure. In addition to Denmark, Sweden and Germany, which have successfully implemented offshore wind farms, especially by countries lacking available terrestrial space, the U.K. has also come to the fore with successful investments recently.

The world's largest offshore wind farm is the London Array on the U.K. coast with a capacity of 630 MW. The Hornsea plant, which is expected to be in service in 2020, is located on the banks of the Yorkshire with seven units of 174-MW turbines used for this project, which will have installed power of 1,200 MW upon completion. The plant is expected to produce 4.1 terawatt-hours of electricity per year.

The U.K. leads in offshore power plants with a capacity of 6,183 MW, followed by Germany with 5,183 MW. China, which has increased its potential in all clean resources with renewable energy policies it has developed in recent years, comes third with a capacity of 2,788 MW.

In spite of the cost element, offshore power plants that have turbines with an average of 6 to 7 MW each contribute more to supply security since they operate at higher efficiency and on a regular course.

Prices started at 72 euros per MW for offshore wind energy tenders in the Netherlands last year, but are down to 49.9 euros per MW at Denmark's Krieger's Flak project, indicating that interest in such investments will increase.