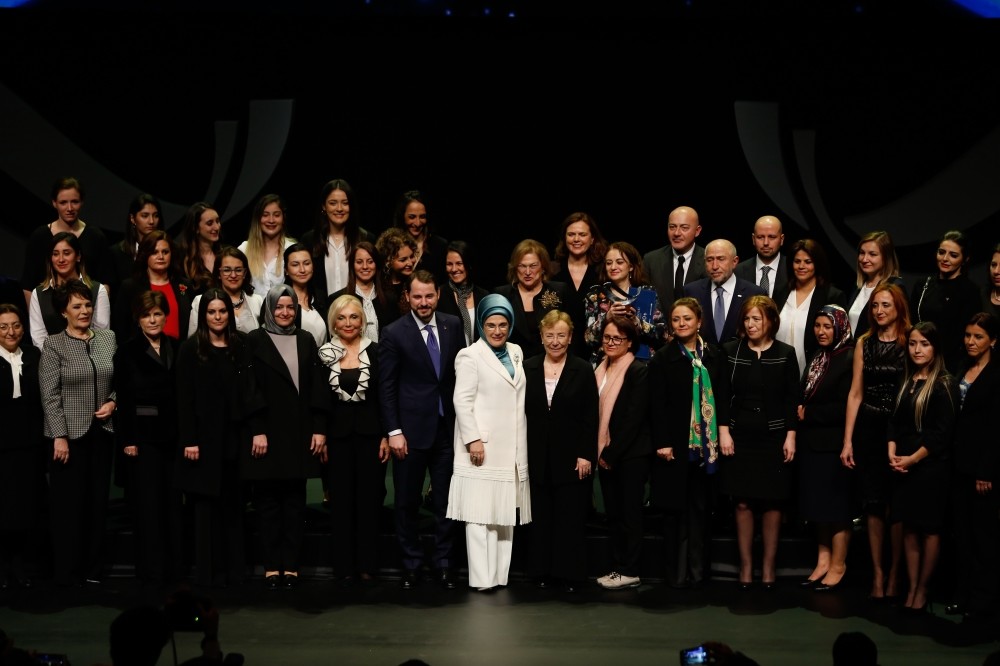 Energy and Natural Resources Ministry held the ,Women Empowering Turkey, awards ceremony to honor women who have contributed to the Turkish energy industry to inspire the involvement of more women in the male-dominated sector, Istanbul, March 6.
by Daily Sabah Mar 08, 2018 12:00 am

The Energy and Natural Resources Ministry marked a first of its kind event on Tuesday evening. Organized by the ministry under the auspices of first lady Emine Erdoğan, the Women Empowering Turkey event honored women who work in the country's energy industry either as a scholar or professional and have made difference with invaluable contributions to the sector vital for the Turkish economy. The accomplished women in the energy, which is generally considered a male-dominated area in Turkey, were awarded at the event to encouraging more women to take bigger roles in the industry.

Energy is thought of as a male-dominated sector and the gender gap in the sector was elaborated in a number of studies. Yet the increasing awareness of women's role in development and growth and more successful role models in the sector has led to a different turn in Turkey's energy industry. The change was honored with the Energy and Natural Resources Ministry's awards ceremony - a powerful indicator of the public sector and government's support for encouraging women in the industry. The ceremony was attended by first lady Erdoğan, ministers, parliamentarians, celebrities, business figures and the press.

"A democracy struggle that excludes woman is doomed to fail. I see here today many a great woman who struggles against difficulties. The presence of women is of the utmost importance particularly for male-dominated sectors. You have courageously proven your power in jobs women are deemed incapable of doing. You have empowered Turkey," Erdoğan said in her address.

The first lady emphasized that societies that exclude women from different areas of life cannot develop. She also said that environment, energy and women's rights will be the most important topics of the next century. Therefore, she said, societies that are able to mobilize women's power will prosper.

"When it comes to environmental and energy issues, which sometimes find themselves in conflict, the role women becomes more important. A greater the role of women in energy will ensure more sensitivity to environmental issues as women who are awarded tonight have proven," Erdoğan said, citing the women awarded at the ceremony for their contributions to environmental studies that increased sustainability and reduced the environmental impact of energy operations. Speaking at the award ceremony, Energy and Natural Resources Minister Berat Albayrak pledged that the ministry will cooperate with the private sector to recruit more women in the energy industry.

Explaining that the number of women working in the industry has not reached the desired level, Albayrak said: "I would like to call on all women, particularly those who have recently started their careers or are planning their careers. We need your input in energy and mining. As the minister of energy and natural resources, I pledge that we will make positive discrimination for you in energy recruitments."

A form of governing in which women have no right to speak and do not participate in democracy cannot flourish, Albayrak said.

The minister also said that the participation and active role of women is necessary for the full accomplishment of the ministry's National Energy and Mining Policy, which was declared in April 2017.

He also expressed his hope that the awards ceremony will inspire other women who want to work in energy.

Güler Sabancı, the chairwoman of one of Turkey's largest conglomerates, Sabancı Holding, and chair of the jury that chose the award winners at Tuesday's ceremony, spoke of the worldwide efforts to bring more women into the energy industry.

Drawing attention to the immense transformation of the Turkish energy industry over the past 14 years with liberalization, Sabancı said that the sector has attracted significant foreign and domestic investors due to its competitive structure after liberalization.

Sabancı spoke of the global gender gap in the sector, referring to the statistics of the World Economic Forum that showed that women only make up 19 percent of those in the energy industry. Therefore, she said, the event is important to encourage more women.

The awards were granted in six categories. The academic award went to Sabancı University associate professor Selmiye Alkan Gürsel for her work on the enhancement of

lithium ion battery capacity and other projects that contribute to energy efficiency. Aksa Energy Gümüşhane and Bayburt Natural Gas Distribution A.Ş. Manager Rahime Meydan was granted the award in the professional category for her social responsibility projects that facilitated the accessibility of disabled people to energy services. Professor Nevin Selçuk of Middle East Technical University (ODTÜ) received the business award with her valuable contributions to increased efficiency of thermal power plants. The entrepreneur award was granted to Zümran Ömür, who started a business in a village in Kars by establishing Boğatepe Environment and Life Association and providing employment for other women in the village.