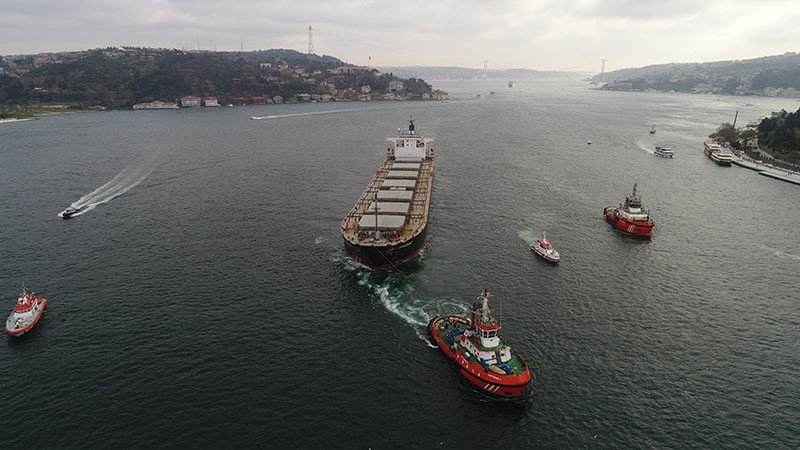 The The Malta-flagged bulk carrier Vitaspirit is being towed to the Marmara Sea in the Bosporus Strait following the crash that caused extensive damage to a waterfront mansion, on April 7, 2018. (IHA Photo)
by Anadolu Agency Apr 10, 2018 12:00 am

Tanker traffic in the Bosporus and Dardanelles is posing danger for environmental and public safety in addition to economic risks as the last accident in the Bosporus proved, raising the issue of updating the Montreux Convention and forming alternative routes to the straits for the free passage of merchant vessels

The growing volume of oil and gas tanker traffic is creating significant environmental, public safety and economic risks for the entire length of the shores of the Turkish straits, the chairman of the Bosporus Energy Club said yesterday.

Since the signing of the Montreux Convention in 1936, the legal instrument governing the regime of the straits, the size and capacity of the ships has grown enormously, which has raised major safety concerns, Mehmet Öğütçü told Anadolu Agency (AA) in an exclusive interview.

On April 7, a ship hit the shore of the Bosporus in Istanbul and crashed into a historic mansion causing extensive damage to the building, its environment and its contents.

The Malta-flagged tanker was carrying 62.6 tons of grain from Russia to Saudi Arabia. A technical problem on the ship caused the crash. The strait was closed to two-way vessel traffic following the incident.

Under the Montreux Convention, merchant vessels enjoy the freedom of passage through the Turkish straits, while the transit of warships is subject to restrictions, according to the Turkish Foreign Ministry.

The Black Sea's only connection to the world's oceans is through Turkey's straits and the Sea of Marmara.

The volume of traffic has increased greatly - from 4,500 in 1934 to 49,304 in 1998. In 2017, 87,593 ships passed through the straits out of which 13,732 comprised of carriers of liquefied natural gas (LNG) and liquefied petroleum gas (LPG), as well as oil tankers, making the Turkish straits one of the world's busiest maritime chokepoints.

"I believe that revising the Montreux Convention in keeping with changing times is not only a legal matter, nor is it a political matter between the contracting parties to resolve, but is a matter of urgency," Öğütçü warned.

Energy transit was not a high priority at the time when the convention negotiations took place before World War II but is becoming so now, Öğütçü affirmed.

Thousands of tankers transit the Turkish straits annually, of which the vast majority are headed southbound from the Black Sea toward the Aegean Sea and the Mediterranean.

An estimated 3 million barrels a day of crude oil and 20 million tons per year of petroleum products transit through the Turkish straits. This represents around 3 percent of the annual global oil trade, compared to 20 percent that passes through the Strait of Hormuz, Öğütçü stated.

"It looks like Tenghiz and Kashagan oil coming from Kazakhstan will further increase this traffic and volume," he warned.

According to Öğütçü, under normal circumstances, the contracting parties of the Montreux Convention would sit down and revise the relevant provisions to update them in light of the new requirements.

"This has not happened to date because there is a deep-seated concern in Ankara that once Pandora's box is opened you never know where it might end up.

"There is also an unwillingness among other parties which signed the convention to avoid potential restrictions to the free passage and additional cost that may be brought on for ensuring the security of the waterways," Öğütçü said.

Maritime incidents in the straits pose a considerable risk to public safety and to the environment with 141 to date since 2006. And the risk of a major accident remains too high in the context of rapidly increasing transit traffic, Öğütçü explained.

In 1979, MT Independenta, a large Romanian crude oil carrier, collided with a Greek freighter at the southern entrance of the Bosporus and exploded. Almost all of the tanker's crew members died. The wreck of the Independenta burned for weeks, causing heavy air and sea pollution in the Istanbul area and the Marmara Sea.

In June 2018, Turkey unveiled the Canal Istanbul Project, an artificial sea-level waterway parallel to the Bosporus to connect the Black Sea to the Sea of Marmara.

The proposed canal is 45-50 kilometers long, 150 meters wide and 25 meters deep. The tentative completion date was announced as 2023 to coincide with the Republic of Turkey's 100th anniversary.

"It is still too early to make an assessment of the proposed canal project; however, it is clear that the costs and the engineering challenges will be huge," Öğütçü said.

Revising the Montreux Convention in keeping with the changing times is urgent but will be very challenging . It involves the sustainability of several cities and the security and well-being of more than 20 million people, which is by no means comparable to the potential extra costs that some proposed bypass projects could entail, he underlined.

"The Trans-Anatolia pipeline and the Trans-Thrace project have been dormant for several years now," he said in explanation of the stalled north to south routes as an alternative to waterway transit for oil and gas.

"It looks for the time being, at least,when Turkey faces dangerous geopolitical moves in its immediate neighborhood, the status quo could still be the most preferred option.

"This does not mean that, while avoiding unilateral action and measures, Turkey should shy away from developing a win-win proposition to address its own safety and environmental problems experienced since 1936 under the Montreux Convention without causing any serious damage to the interests of the contracting parties," he concluded.