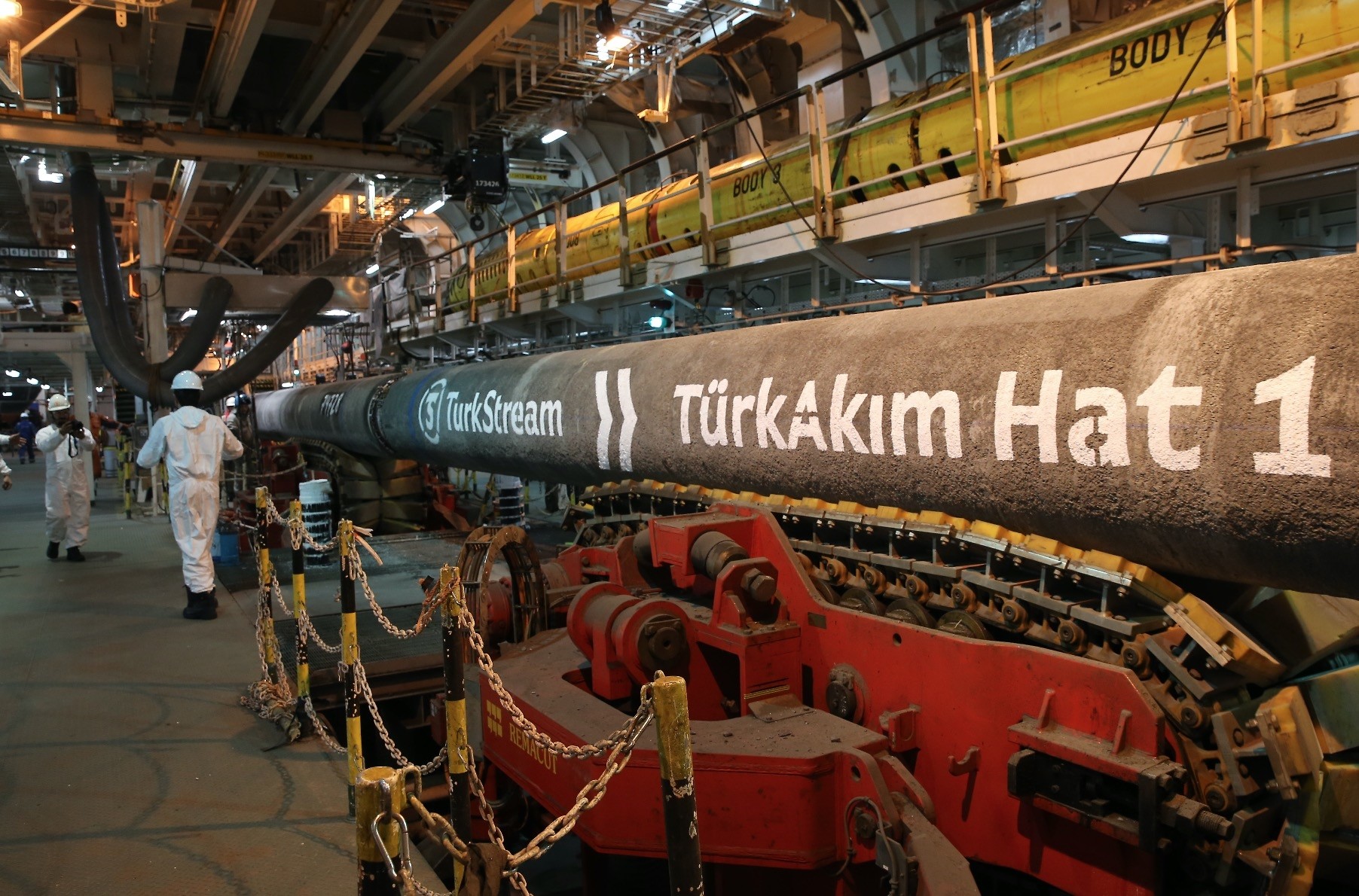 Gazprom and BOTAu015e will create a joint venture, TurkStream Gas Transport, to construct the second line of the TurkStream project.
by Daily Sabah with Wires May 28, 2018 12:00 am

Ankara and Moscow reached a retroactive agreement for a 10.25 percent discount on the natural gas and a payment of $1 billion will be made to Turkey, while the two sides also came to an agreement to complete TurkStream's second line to Europe by 2019

Turkey and Russia have reached a retroactive agreement for a 10.25 percent discount on the natural gas Ankara buys from Moscow, Energy and Natural Resources Minister Berat Albayrak said Saturday. The two sides also signed a protocol to jointly end the second line of the TurkStream gas pipeline project by the end of 2019. Speaking at the opening ceremony of the ruling Justice and Development Party (AK Party) Istanbul Provincial Directorate's First Regional Election Coordination Center in Maltepe, Istanbul, Albayrak said a $1 billion payment will be made to Turkey under the deal and that it will be made before the June 24 elections.

Russian state gas giant Gazprom also said Saturday that it had signed a protocol with the Turkish government on a planned gas pipeline and agreed with Turkish firm BOTAŞ to end an arbitration dispute over the terms of gas supplies.

The protocol concerned the land-based part of the transit leg of the TurkStream gas pipeline, which Gazprom said meant that work to implement it could now begin.

Gazprom said in the Saturday statement, without elaborating, that the dispute with BOTAŞ would be settled out of court.

BOTAŞ had appealed to the International Chamber of Commerce (ICC) to resolve the gas price issue with Russia's Gazprom in October 2015. Before the arbitration, both sides discussed a likely 10.25 percent discount on the prices and did not manage to sign a deal on it.

Turkey demanded a discount on the price of the natural gas from Russia via the Blue Stream and the Western Line in 2015. Gazprom initially agreed on the discount in early 2016, but later on unilaterally canceled the 10.25 percent discount applied to natural gas and Turkey applied to the International Court of Arbitration to resolve the dispute.

Albayrak said that the gas dispute was not the only issue on which Turkey and Russia agreed.

"We came to an agreement that Turkey and Russia will complete the second line of TurkStream by the end of 2019," he said.

The first line of the pipeline reached the Turkish shore at the end of April after a 930 kilometers deep-water offshore pipe-laying from Russia's Anapa to Turkey's Kıyıköy by the world's largest pipe-laying vessel, Pioneering Spirit.

TurkStream's first line will carry 15.75 billion cubic meters (bcm) of natural gas to Turkey which is planned to be operational in December 2019. The project will have a total throughput capacity of 31.5 bcm, thanks to the second line that will go to Europe. There was an uncertainty on the advancing of the land-based line of the project that will carry Russian gas to the south European territory.

After Albayrak's announcement, Gazprom said in a statement that with BOTAŞ it will create a joint venture, TurkStream Gas Transport, to construct the second line of the TurkStream project.

"Thus, we will be completing a giant project by the end of 2019," Albayrak confirmed.

According to EMRA, the share of electricity production in Turkey's natural gas consumption increased from 35.5 to 37.1 year-on-year in 2017.

Turkey, the second biggest consumer of Russian gas after Germany, imports around 30 billion cubic meters of gas from Russia annually.

However, the share of Russian gas in Turkey's total natural gas import decreased to 51.8 percent in 2017 from 52.9 percent in 2016. Turkey also imported natural gas from other countries including 9.2 bcm from Iran and 6.5 bcm from Azerbaijan. The number of Turkish natural gas users increased by 1.1 million as it reached 13.6 million in 2017, the data showed. Turkey's private sector uses 10 bcm of natural gas every year - over 30 percent of the gas imported from Russia.