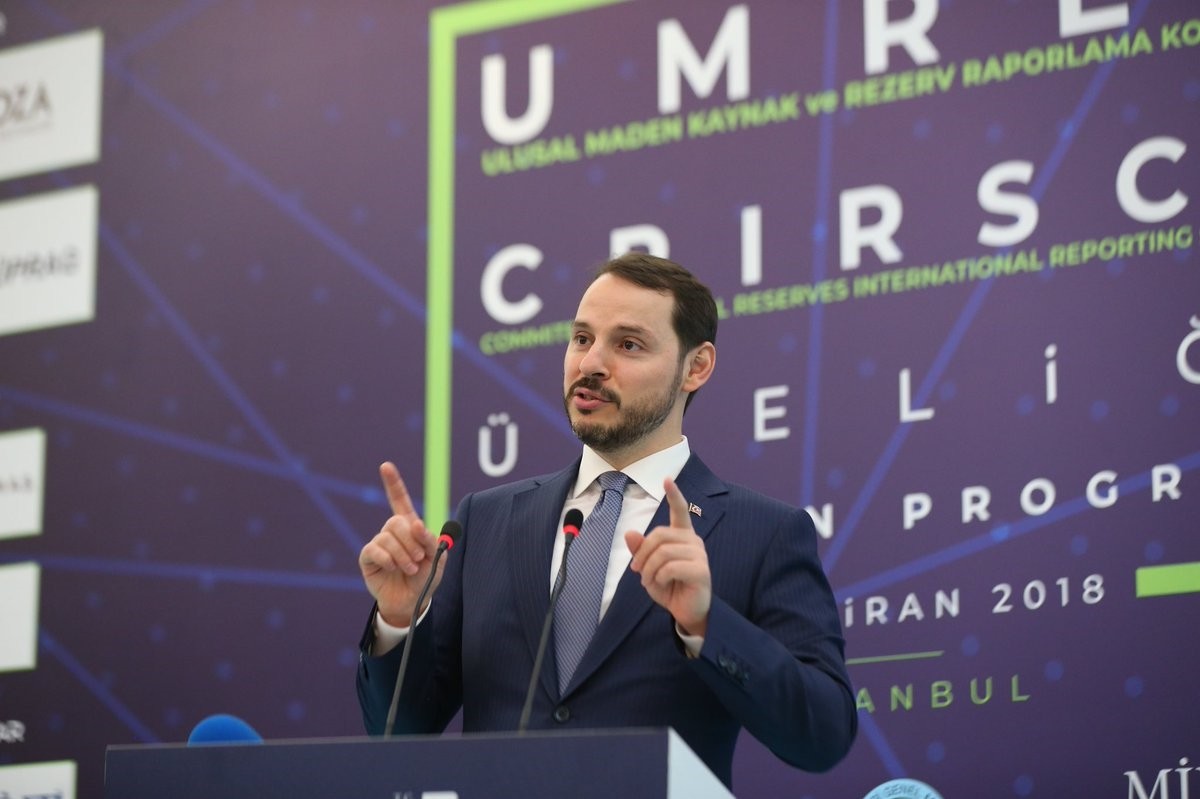 International reporting standards committee has accepted Turkey's membership, a move that will make the data collected in the country internationally acknowledged and it will provide mining investors transparent, reliable access to information at global standards

Turkey's National Resources and Reserves Reporting Committee (UMREK), which was established in 2016 in order to accurately determine reserves and quality of mineral resources and ore deposits and provide sufficient data, was accepted to the membership of the Committee for Mineral Reserves International Reporting Standards (CRIRSCO) last month. A ceremony on the occasion of UMREK's membership was held yesterday with Energy and Natural Resources Minister Berat Albayrak in attendance. In his remarks at the ceremony, Minister Albayrak pointed out that UMREK is the first member of CRIRSCO in Eurasia and the 13th in the world.

Energy Minister Albayrak added that the membership enables UMREK to report drilling, analysis, testing and all data regarding exploration and operation activities in minefields at international standards and recognizes UMREK data worldwide. Albayrak said UMREK code will be a common and sole market reporting standard for all financial stakeholders, industry stakeholders and the public.

"We will guarantee international confidence in the reports is maintained and protected. Earlier reports prepared in Turkey were not accepted by financial institutions since they were not internationally recognized," Albayrak said.

"Our miners used to allocate funding to international reporting organizations, which caused time loss and outflow of resources. Now, our firms will not have to get this service by paying large amounts of money to the authorities abroad. These reports will now be prepared by independent and competent people and certified by UMREK. Financing institutions will also consider these reports on their loans."

He stressed that all reporting operations will be carried out by Turkish engineers thanks to UMREK, thus providing the employment of a very important and educated labor force. Recalling that the ministry has completed the establishment of the Association of Earth Sciences, Mining and Metallurgy Professionals (YERMAM) together with UMREK, Albayrak said the competent person certificate will be offered by YERMAM and granted by UMREK. Adding that they will provide a large business area for many different engineering disciplines.

Pointing to the importance they have attached to the localization of technology and workforce, Albayrak also underlined that local employment and technology is required in each project to make Turkey a production base in energy technologies.

The minister said they reduced the risks for the investors and provided data relief with UMREK, suggesting that the investor will have clearer, more transparent and more reliable access to information in international standards and the desired information will be available at all times. "Together with UMREK, the investor will receive the required data, assess, and make decisions. This data will be shared with the investors so that production can begin, employment can increase and the economy can grow," Albayrak said.

Albayrak said the mining sector is of vital importance for Turkey, in which added value can multiply from raw materials to the finished product by 24 times.

He noted that in developed countries, the ratio of mining to gross domestic product is five, six and seven percent, while in Turkey, this ratio stands at a level of one percent. Stressing that there is a huge potential here to grow five, six or seven times more, which needs to be evaluated.

Albayrak said Turkey is among the world's considerable countries in terms of mineral reserves. "What is important, however, is not how much reserves we have, but to have a sustainable system that will process these reserves and turn them into value. Our mining import today is around $11 billion," Albayrak said. "We now must ensure that Turkey offers high value-added products to the world market with advanced technology rather than manufacturing and selling raw materials."

Minister Albayrak is due to announce the details of the boron strategy today, which will convert Turkey's boron reserves into high value-added products and ensure the transfer of advanced technologies in the world to Turkey. For this transfer of technology, a signing ceremony will be held tomorrow. He said in an earlier statement in February that they had formed a team of experts working in competent institutions in the world for the boron mine, highlighting that they will make very important moves this year in this field. He had added that they would announce some facilities this year at the point of converting boron into a value-added and strategic product.