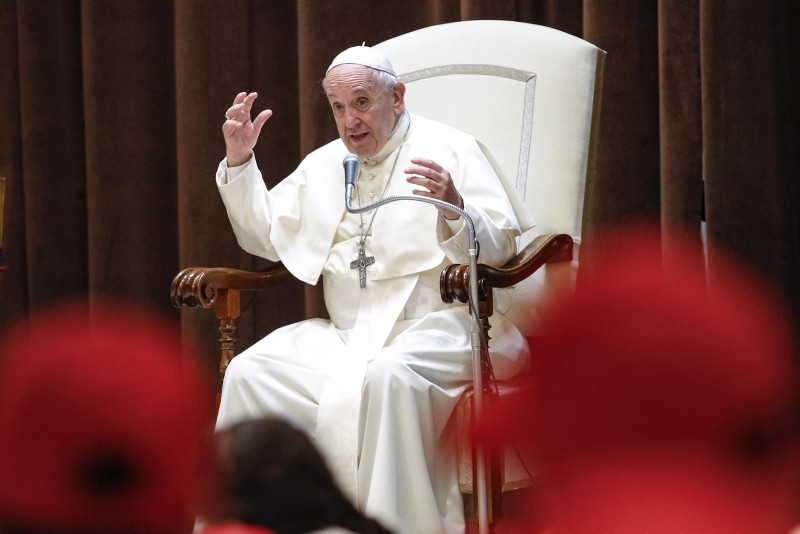 Pope Francis warned that climate change risked destroying humanity on Saturday and called on energy leaders to help the world to convert to clean fuels to avert catastrophe.

"Civilization requires energy but energy use must not destroy civilization," the pope told top oil company executives at the end of a two-day conference in the Vatican.

Climate change was a challenge of "epochal proportions", he said, adding that the world needed an energy mix that combated pollution, eliminated poverty and promoted social justice.

The conference, held behind closed doors at the Pontifical Academy of Sciences, brought together oil executives, investors and Vatican experts who, like the pope, back scientific opinion that climate change is caused by human activity.

"We know that the challenges facing us are interconnected. If we are to eliminate poverty and hunger ... the more than one billion people without electricity today need to gain access to it," the pope told them.

"Our desire to ensure energy for all must not lead to the undesired effect of a spiral of extreme climate changes due to a catastrophic rise in global temperatures, harsher environments and increased levels of poverty," he said.

The oil and gas industry has come under growing pressure from investors and activists to play a bigger role in reducing greenhouse gas emissions to meet goals set out in a 2015 climate agreement signed in Paris.

Companies are betting on increased demand for gas, the least polluting fossil fuel, and to a lesser extent on renewable power such as wind and solar to meet global targets of net zero emissions by the end of the century.

Among the some 50 participants were Darren Woods, CEO of ExxonMobil, Claudio Descalzi, head of Italy's ENI, Bob Dudley of BP, Eldar Saetre, CEO of Norwegian oil firm Equinor (formerly called Statoil), Vicki Hollub of Occidental Petroleum, and investors including Larry Fink of BlackRock. Their remarks on the first day of the closed-door conference were not released by the Vatican.

Francis, who wrote a major document called "Laudato Si" (Praised Be) on protecting the environment from global warming in 2015, said it was "worrying" that there still was a continuing search for new fossil fuel reserves.

He said the transition to accessible and clean energy was "a duty that we owe towards millions of our brothers and sisters around the world, poorer countries and generations yet to come".

The pope also called for a global, long-term common project:

"Environmental and energy problems now have a global impact and extent," he said.

While Francis lauded the oil executives for embedding an assessment of climate change risks into their planning strategies, he also put them on notice for their "continued search for fossil fuel reserves," 2½ years after the Paris climate accord "clearly urged keeping most fossil fuels underground."

Energy experts and those who advocate fighting climate change expressed doubts before the conference that it would amount to anything other than a PR opportunity for the companies to burnish their image without making meaningful changes.

In his remarks, the pope said he hoped the meeting gave participants the chance to "re-examine old assumptions and gain new perspectives."

Francis said that modern society with its "massive movement of information, persons and things requires an immense supply of energy." And still, he said, as many as one billion people still lack electricity.

The pope said meeting the energy needs of everyone on the planet must be done in ways "that avoid creating environmental imbalances, resulting in deterioration and pollution that is gravely harmful to our human family, both now and in the future."

He urged participants to use their "demonstrated aptitude for innovation" to address "two of the great needs in today's world: the care of the poor and the environment." He noted that the poor pay the highest price for climate change, often being forced to migrate due to water insecurity, severe weather and an accompanying collapse in agriculture.