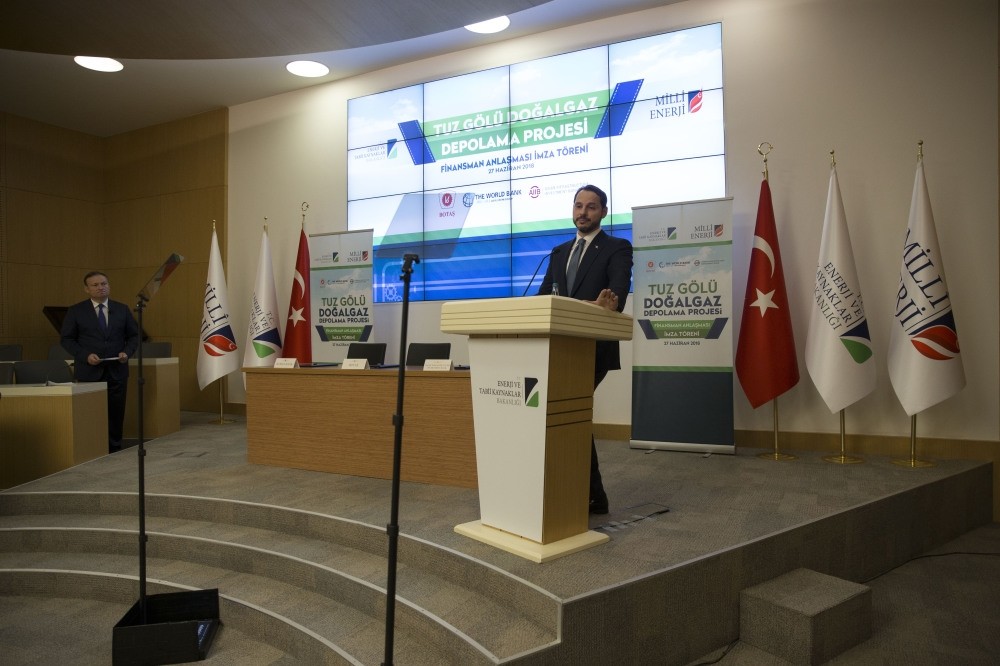 Turkey's ever-growing energy industry continues to draw investments from international institutions. The World Bank and Asian Infrastructure Investment Bank (AIIB) have provided a $1.2 billion loan for the capacity expansion project of Lake Tuz underground natural gas storage facility, the Energy and Natural Resources Minister Berat Albayrak announced yesterday at a ceremony in Ankara. The storage facility is expected to reach 5.4 billion cubic meters of storage capacity at the end of the capacity-increasing project.

The second phase of the project will be operational in 2019 or 2020 and the third phase is planned to start service before 2023, raising the gas storage capacity of the facility to 5.4 billion cubic meters (bcm).

Minister Albayrak stressed that the capacity expansion work in other gas storage facilities in Turkey continues. He explained that the construction of the gas storage capacity of the Northern Marmara Gas Storage Facility in Silivri continues after a deal was inked last year in April.

The Silivri Natural Gas Storage Facility, which can supply 25 million bcm of gas per day to the system with its current natural gas storage capacity, will be increased to 75 million bcm per day by 2020.

The annual storage capacity of the Silivri Natural Gas Storage Facility will be increased from 2.3 bcm to 5 bcm in 2020.

With additional capacity expansions in two facilities, Turkey's gas storage capacity will exceed 11 billion cubic meters before 2023, making it the country with the highest storage capacity in the region.

The minister particularly highlighted that both the World Bank and AIIB decided to provide loans for Turkey before the election results were announced. The World Bank, he recalled, approved the loan in May and the AIIB endorsed it on June 24, the day Turkey's presidential and parliamentary elections were held.

"These loans emphasize the confidence in Turkey's future and stability and the Turkish economy," Albayrak underscored. The political stability ensures confidence and confidence brings in investments that fuel growth, he added.

Albayrak cited the new presidential governance system and highlighted that a road map for the multidimensional transformation in the economy is slated for implementation and energy is of particular importance in that transformation. The ministry, he added, laid the ground for technology and productivity-oriented infrastructure that will upgrade the Turkish energy industry.

The energy minister said Turkey is putting into action the most important investments in the world, adding that they did not stop their work even during the presidential and parliamentary elections.

Indicating that Turkey has now entered an uninterrupted period of stability, Albayrak said that there were no canceled investments that were delayed due to the elections.

The energy minister also remarked that Turkey has initiated explorations in its seas for the first time with its first drilling vessel and its own human resources.

He also noted that they have put signatures regarding their new boron strategy which will add a great value. "We have launched the advanced technology and value-added product era. We have initiated the process regarding the tender for a 1,200-megawatt (MW) offshore wind plant which will be one of the biggest in the world and the first of its kind in the country. Here, we will gain a new impetus for the efforts of technology localization that we started with domestic production and local employment conditions. Small-scale projects are no longer enough to a growing and developing Turkey." The gas storage expansion project aims to increase the reliability and security of gas supply in Turkey by expanding the underground gas storage facility at Lake Tuz in Central Anatolia.

In November 2005, the World Bank approved a $325 million loan for the first gas storage project at Lake Tuz. In July 2014 it approved additional financing of $400 million for that initial project, which will provide storage for about 1 billion cubic meters of gas. The Gas Storage Expansion Project will support the Turkish government's efforts to quintuple the size of the storage facility at the same location.

The Gas Storage Expansion Project will be implemented by Turkey's Petroleum Pipeline Corporation (BOTAŞ) and will consist of three components.

The first phase is Lake Tuz Gas Storage Expansion Plant which involves building an underground gas storage facility within a salt formation close to the lake. Upon completion, the plant will raise the capacity of working natural gas storage by about 4 billion cubic meters. The second part will cover construction supervision and monitoring while the third component will focus on environmental and social impact assessment (ESIA) and the resettlement action plans (RAP) monitoring.

An investment of $700 million was put in, which could be described as the first phase in the project, as 1.2 bcm of gas could be stored in a total of 12 caverns of the plant with the commissioning of the remaining six caverns.