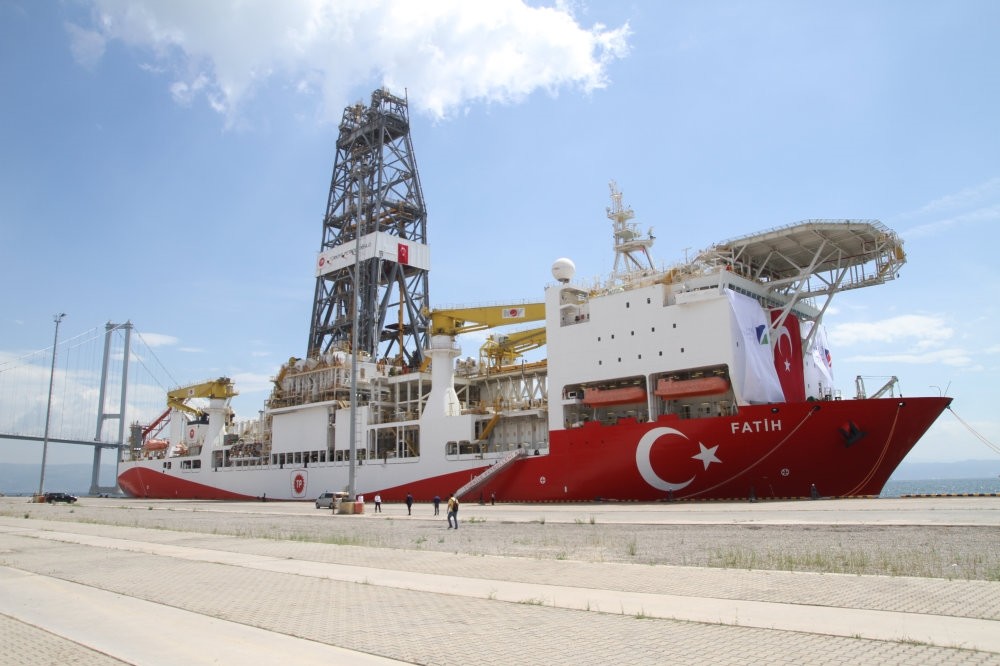 The 229-meter-long vessel is capable of drilling to a maximum depth of 12,192 meters. The first drilling well will reach depths of 2,600 meters.

He also announced that Turkey will very soon procure a second drillship. "I hereby would like to emphasize that Turkey will continue to protect its rights in the Mediterranean as provided by the international law," Dönmez said.

State-owned Turkish Petroleum's (TP) seismic vessels Barbaros Hayreddin and Oruç Reis carry out seismic surveys and collect data both in the Black Sea and the Mediterranean. Turkey aims to broaden its deep-sea and land exploration and drilling operations for oil and gas as part of its National Energy and Mining Policy, announced in April 2017. To decrease its dependency on energy import and cater for the growing market needs, the Turkish government has developed a national energy and mining strategy based on three main pillars: Localization, security of supply and predictability of market conditions, with particular importance attached to regional infrastructural projects for diversification as a guiding element. The policy is a broad framework explaining Turkey's plans in energy including oil and gas explorations, mining, and renewable energy investments.

In his address, Minister Dönmez also highlighted the necessity to mobilize local resources to ensure energy efficiency. "The ministry plans to accomplish a $10.9 billion investment in energy efficiency by 2023 and from that investment, a total of $30 billion will be generated in savings until 2033," the minister said and continued, "Turkey is an energy-intensive economy. If we want to boost our competitiveness, we have to manufacture the same unit of goods with less energy." Minister Dönmez also recalled that the energy ministry will receive bids for Turkey's first offshore wind farm until Oct. 23.

The 1,200-megawatt project will be realized within the framework of the Renewable Energy Resource Areas (YEKA).

to open next week

Energy Minister Dönmez also announced that the State Oil Company of Azerbaijani Republic (SOCAR)'s latest refinery investment in the Aliağa district of the Aegean province of İzmir will be opened next week.

single-location real sector investment in Turkey's history with an estimated cost of $6.3 billion and will be one of the biggest petroleum and gas operations in Europe, Middle East and Africa.

The refinery will have an annual processing capacity of 10 million tons of crude oil and manufacture goods that are usually imported to Turkey.

STAR Refinery is expected to cut Turkey's current account deficit by $1.5B. It also looks to fully eliminate the need to import jet fuel, which will correspond to 7-8 percent of its total production. The refinery is also expected to reduce liquefied petroleum gas (LPG) imports to 70 percent from 79 percent.