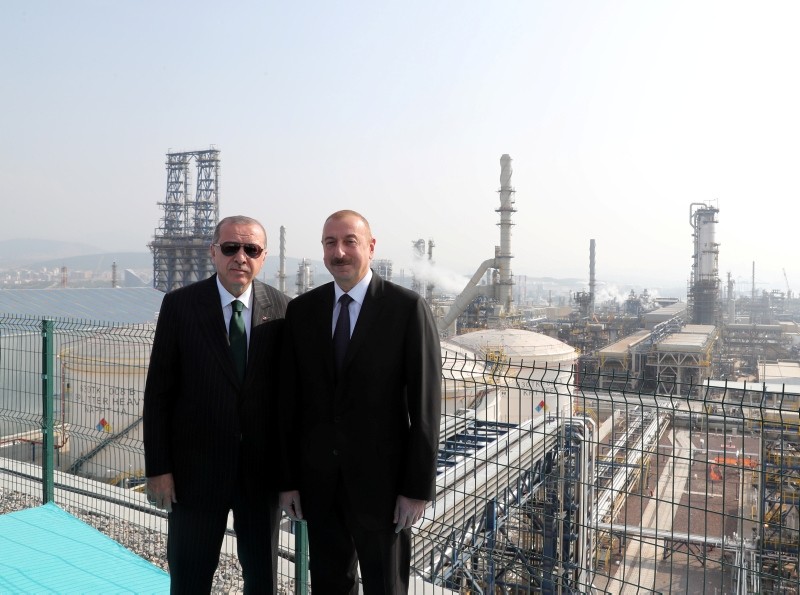 Addressing the grand ceremony, Erdoğan said Turkey and Azerbaijan are taking brotherly ties, which already represent an example to the world, to the next level.

"This project is the largest real-sector investment in the last 30 years," Erdoğan said.

The facility that is also significant in terms of employment, will employ some 1,000 people, he added.

At this facility, which is also significant in terms of employment some 1,100 people will be employed, he added.

The $6.3-billion refinery is the largest single-location real sector investment in Turkey's history and will be one of the biggest petroleum and gas operations in Europe, the Middle East and Africa.

The refinery was built by SOCAR, which began investing in Turkey after it acquired the country's leading petrochemical company Petkim in 2008 for $2 billion. Construction at the refinery began in 2011.

The project has the feature of being the first "Strategic Investment Incentive Certificate" project in Turkey and is expected to reduce Turkey's annual foreign trade deficit by at least $1.5 billion.

The import rate of diesel will drop below 40 percent once the refinery reaches its full capacity. With 1.6 million tons of production, it will fully eliminate Turkey's need to import jet fuel. The refinery is also expected to reduce liquefied petroleum gas (LPG) imports to 70 percent from 80 percent.

The plant, which constitutes a significant share of SOCAR investments in Turkey, took seven years to build.

Meanwhile, STAR started operations at its first facility in early August. The first crude oil cargo ship carrying 80,000 tons of feedstock from Azerbaijan, Absheron, arrived at the 2,400-hectare facility on the Aliağa Peninsula.

Turkey CEO of SOCAR, Zaur Gahramanov, had confirmed the arrival of the first shipment and said production would start at the end of October.