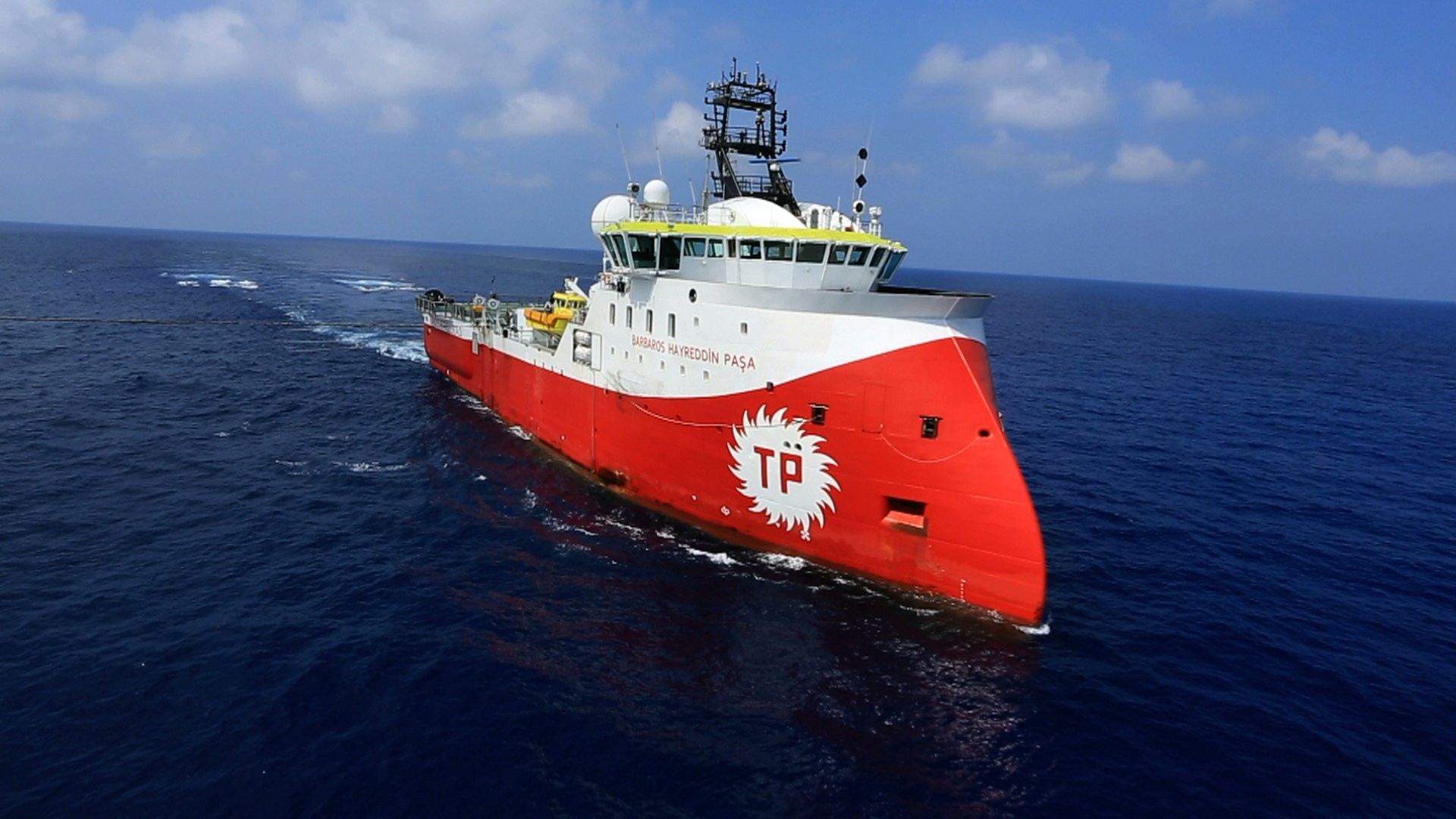 Turkeyu2019s first seismic vessel, the Barbaros Hayreddin Pau015fa has been conducting exploration operations in the Mediterranean since April 2017.
by Daily Sabah Oct 24, 2018 12:00 am

Turkish seismic research vessel Barbaros Hayreddin Paşa, which was harassed by a Greek frigate while carrying out previously announced exploration in the Mediterranean last week, will now be under the protection of the Turkish Naval Forces during its further activities

After a Greek frigate harassed a Turkish research ship in the Eastern Mediterranean on Thursday, Turkish Naval Forces Command units have started patrols in the region while seismic exploration is conducted.

The seismic research vessel Barbaros Hayreddin Paşa will continue to carry out further exploration within the protective circle of the Naval Forces, according to information received from diplomatic sources.

Within the framework of agreements signed between the Turkish Republic of Northern Cyprus (TRNC) and Turkey, the Barbaros Hayreddin Paşa began to work in the already declared research field of Morphou in the Eastern Mediterranean.

The vessel, which was continuing exploration in the region, was harassed by a Greek frigate last week on Thursday. The harassment ended with Turkish Naval Forces Command elements moving rapidly to the region and stopping the Greek vessel.

Ankara warned Athens after the incident to "abstain from acts that would cause an escalation in the region," stressing that Greek "insistence on unrealistic claims" would only result in harming bilateral relations and regional stability.

The Turkish vessel was carrying out research activity, as had been previously announced, on the Turkish continental shelf of the Güzelyurt Research Coast off the Republic of Northern Cyprus.

The Foreign Ministry issued a statement saying Turkey would continue to exercise its sovereign rights and jurisdiction over its continental shelf.

Making a statement about the issue, National Defense Minister Hulusi Akar said yesterday: "No steps or fait accompli against Turkey will be allowed in Cyprus, the Aegean and the Eastern Mediterranean.

"Everyone should know that any project excluding Turkey and the TRNC in the Aegean and Mediterranean does not have chance to exist and everyone should abandon and avoid any provocation that will jeopardize the region," Akar said.

According to information received from diplomatic sources, Greece's harassment of Barbaros Hayreddin Paşa led to a stir in the Mediterranean. The sources said that Ankara produced a policy to show a decisive stance about not allowing the Greek Cypriots' "unilateral fait accompli" in the Mediterranean. Within the framework of the measures taken, Naval Forces Command units started patrolling the region and will do so for as long as the seismic exploration is being conducted there.

Currently, there are nearly 40 warships in the region belonging to Turkey, Russia, the U.S., Italy, France and Greece.

Sources said the ambassador was summoned to the ministry over recent remarks by Nikos Kotzias, who recently resigned as Greece's foreign minister. Kotzias said Greece was ready to extend its territorial waters from 6 miles to 12 miles in the Ionian Sea. Foreign Minister Mevlüt Çavuşoğlu mentioned Greece's intentions to expand its nautical border yesterday morning shortly before the ambassador was summoned.

Turkey cannot tolerate steps in the Aegean Sea by Greece without the agreement of the two countries, Foreign Ministry Spokesman Hamdi Aksoy said in a written statement yesterday.

"We cannot tolerate any step that is not based on mutual consent in the Aegean Sea where two countries have opposite coasts," the statement said.

"The declaration of the Turkish Grand National Assembly, dated June 8, 1995, contains a necessary political warning and is still in force today," it added.

The declaration warns that if Greece increases its territorial waters in the Aegean Sea beyond six miles, the Turkish Parliament will give "all powers," including military, to the government to defend Turkey's interests.

Regarding the Greek Ambassador in Ankara being summoned to the Turkish Foreign Ministry, Aksoy said they conveyed their "views and warnings" to him.

Turkey has consistently contested the Greek Cypriot administration's unilateral drilling activity in the Eastern Mediterranean, saying Turkish Cypriots also have rights to the resources in the area.

Much deeper and more comprehensive relations between the TRNC and Turkey will be established in the upcoming period, Economy and Energy Minister Özdil Nami said yesterday.

Nami, who emphasized it was too early to say anything about the natural gas and oil reserves in the

Mediterranean, said in addition to the amount of oil and natural gas at sea, commercial viability was also significant to utilize the resources.

"Neither the Greek Cypriot administration nor we have the data that requires a clear statement. But we know that Israel has accessed important resources, especially in the region between Cyprus and Egypt. We also know that Egypt has also found [resources] in its own economic areas. Therefore, we think there is a high probability of them being found in the areas belonging to Cyprus as well," Nami explained.

Commenting on the harassment of Barbaros Hayreddin Paşa by the Greek frigate, Nami said the research vessel was continuing its activities in the region as planned, adding that the necessary actions for tensions not to increase were taken.

Nami said Turkey is acting within the scope of its rights under international law, and Greek ships should give up their harassment before tensions escalate.

Recalling that mutual activities related to energy between Turkey and the TRNC will continue, he said: "We have agreements signed with Turkey. We have cooperated with Turkey to conduct research in areas that also belong to Turkish Cypriots. Since the Greek side has used their right to sign agreements with American, Italian and French companies, it is natural that we would also make agreements with Turkish firms and protect our rights and interests in the region."