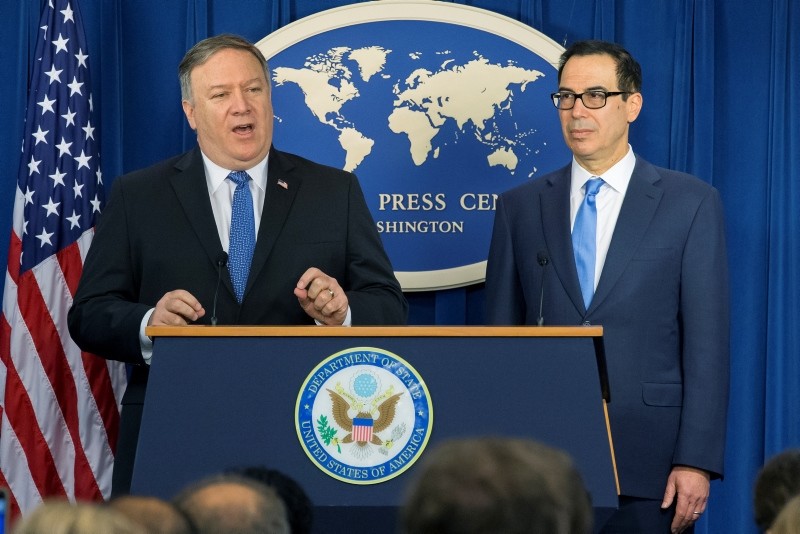 US Secretary of State Mike Pompeo (L) and US Treasury Secretary Steven Mnuchin announce sanctions against Iran during a news conference at the Foreign Press Center in Washington, DC, Nov. 05, 2018. (EPA Photo)
by Daily Sabah with Agencies Nov 05, 2018 12:00 am

One of the key buyers of Iranian oil, Turkey, along with seven other nations, has managed to get a temporary waiver from the U.S. Treasury to continue oil trade with Iran under new sanctions that aim to cripple Iran’s international economic activity

The United States has granted a waiver to Turkey and seven other countries allowing them to temporarily continue buying Iranian oil, Secretary of State Mike Pompeo said Monday, as Washington reimposed sanctions on Iran's banking, energy and shipping industries.

Each of the countries, key buyers of the third largest exporter of the Organization of Petroleum Exporting Countries (OPEC), have cut down their purchases from Iran over the last six months, Pompeo said. Japan and South Korea were previously reported to have fully ceased oil purchases from Iran.

Turkey is one of the key destinations for Iranian crude, accounting for more than a quarter of Turkey's daily average imports of around 830,000 barrels, according to data from the market regulator. While Turkey imported 930,978 tons of crude oil from Iran in May, the figure fell to 287,842 tons in June, according to the monthly petroleum industry report from the Energy Market Regulatory Authority (EMRA). In July and August, oil purchases from Iran totaled to 867.3 million tons and 674.3 million tons.

In the first five months of the year, Turkey's crude imports from Iran made up more than 50 percent of its total oil imports, the EMRA data showed. Last year, Turkey imported 25.8 million tons of crude oil, and Iran ranked first among Turkey's oil suppliers with 11.5 million tons. The country also imports oil via pipelines from Iraq and Azerbaijan. However, geographical proximity and stable transport routes facilitate oil trade between Ankara and Tehran.

Commenting on the sanctions on Monday, Vice President Fuat Oktay said it's "not meaningful and fair" to expect all countries to obey sanctions for a country's interests. "We clearly expressed our stance about the U.S. sanctions. We'll see fallouts of a statement to be made today," Oktay was quoted as saying by the Anadolu Agency (AA).

Also speaking of the issue, Treasury and Finance Minister Berat Albayrak said Iran is an important country in terms of energy. "Its infrastructure in terms of both natural gas and oil is very important. It is even prepared for the toughest and worst times. In this context, we see that Turkey has conducted commercial activities in the region in a balanced manner," Albayrak told private broadcaster, A Haber.

The news on the exemptions helped lower the cost of oil on global markets. The U.S. wants to reduce Iran's oil exports to zero, but the waivers ensure this will not happen, at least in the short term.

Washington warned it will aggressively enforce its sanctions, cautioning businesses around the world to avoid violating the measures or they will be cut out of the U.S. financial system.

Pompeo said more than 20 countries have already cut their oil imports from Iran, reducing purchases by more than 1 million barrels per day.

"Rest assured, Iran will never get close to obtaining a nuclear weapon under President Trump's watch," he said.

Pompeo also said limited waivers had been issued to allow European and other firms to continue conversion work on two of Iran's nuclear facilities.

The U.S. has said the European Union, as a bloc, would not be granted a waiver. European countries who helped broker the 2015 deal are sharply critical of Washington's unilateral withdrawal and have been looking for means to work around U.S. sanctions.

In May, Trump unilaterally withdrew his country from the 2015 landmark nuclear deal signed between Iran and the P5+1 group of nations -- the five permanent U.N. Security Council members U.S., Russia, China, Britain and France plus Germany. He also announced that he would reinstate sanctions against Tehran, which were lifted by the agreement in exchange for tight restrictions on the country's nuclear program.

The measures that came into effect on Monday restore all the sanctions that had been lifted under the accord that gave Iran billions of dollars in sanctions relief in exchange for curbs on its nuclear program.

The U.S. also sanctioned more than 700 Iranian entities and assets on Monday, including 50 Iranian banks, 200 individuals and vessels in Iran's shipping and energy sectors, and Iran's state-run Iranian Air and more than 65 of its aircraft, according to the Treasury website. The move brought to more than 900 the number of Iran-related targets sanctioned by the Trump administration in less than two years.

Trump is trying to cripple Iran's oil-dependent economy and force Tehran to quash not only its nuclear ambitions and its ballistic missile program but its support for militant proxies in Syria, Yemen, Lebanon and other parts of the Middle East.

"U.S. Department of the Treasury's Office of Foreign Assets Control (OFAC)'s action is designed to disrupt the Iranian regime's ability to fund its broad range of malign activities, and places unprecedented financial pressure on the Iranian regime to negotiate a comprehensive deal that will permanently prevent Iran from acquiring a nuclear weapon, cease Iran's development of ballistic missiles, and end Iran's broad range of malign activities," the Treasury statement read Monday.

"[The] Treasury's imposition of unprecedented financial pressure on Iran should make clear to the Iranian regime that they will face mounting financial isolation and economic stagnation until they fundamentally change their destabilizing behavior," Mnuchin said. "The maximum pressure exerted by the U.S. is only going to mount from here," he added.

The SWIFT banking network, the backbone for international monetary transfers, said Monday it has suspended several Iranian banks from its service, after the U.S. reimposed nuclear sanctions on Tehran.

"In keeping with our mission of supporting the resilience and integrity of the global financial system as a global and neutral service provider, SWIFT is suspending certain Iranian banks' access to the messaging system," it said.

"This step, while regrettable, has been taken in the interest of the stability and integrity of the wider global financial system."

Without its services, Iranian banks will find it more difficult to do business with any client prepared to brave U.S. sanctions to maintain ties with Tehran.

European and other banks and businesses could face secondary sanctions if Washington deems them in breach of sanctions, and U.S. officials have been pressing SWIFT to act.

The network connects 11,000 banks and financial institutions in 200 countries and territories, while priding itself on taking a neutral political stance.

It does not hold or manage client funds, but allows the banks to transfer funds by sending messages across the network.