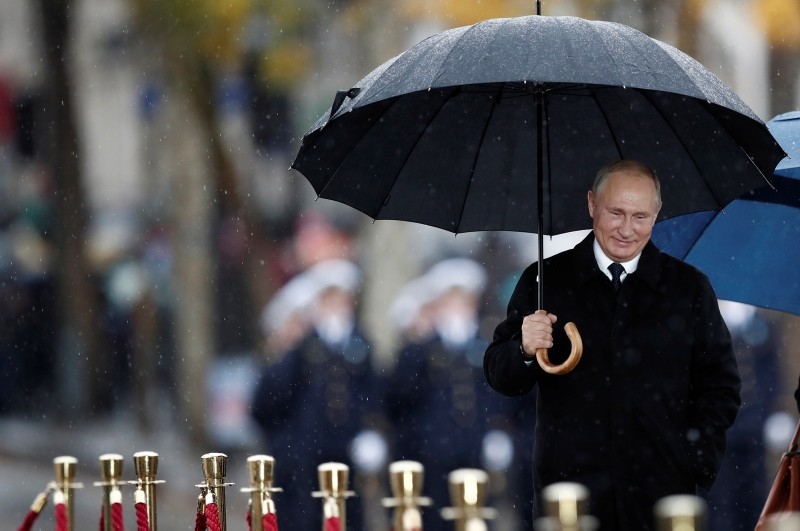 Russia's President Vladimir Putin will pay a visit to Istanbul on Nov. 19 for a ceremony marking the completion of the sea section of the TurkStream natural gas pipeline project, a Kremlin aide said Monday.

The project envisages the construction of a gas pipeline consisting of two lines, each with a length of 930 kilometers and each with the capacity to deliver 15.7 billion cubic meters of gas per year.

"Russian President Vladimir Putin will attend the ceremony of ending construction of the sea section of the TurkStream gas pipeline… The event will take place in Istanbul on November 19," Yury Ushakov was quoted as saying by Russian Izvestiya newspaper.

TurkStream is a transit-free gas export pipeline that will stretch across the Black Sea from Russia to Turkey and further extend to Turkey's borders with neighboring European countries.

The first line is intended for gas supplies to Turkish consumers, while the second will supply gas to south and southeastern Europe.

Russian energy giant Gazprom is planning to start the construction of the overland section of the TurkStream's second gas pipeline in 2019. The project's spokeswoman on last Tuesday said the project will be completed by the end of 2019 as planned, according to Anadolu Agency (AA).

Natural gas transmission will take around 52 hours from Russia's Anapa to the destination in Turkey, at Kıyıköy located in the Kırklareli province in northwestern Turkey, according to the officials.

The control room where natural gas transmission will be monitored will be located at the headquarters of the TurkStream project company in Amsterdam, the Netherlands.

According to the information provided by the TurkStream authorities, the project has been designed to operate for at least 50 years.

The first line reached the Turkish shore at the end of April after 930 kilometers of deepwater offshore pipe laying from Anapa, Russia to Kıyıköy, Turkey.

TurkStream's first line will carry 15.75 bcm of natural gas to Turkey. The project will have a total throughput capacity of 31.5 billion cubic meters with the second line that will go to Europe.

Russia is reportedly considering options for extending the pipeline through Bulgaria and Serbia or through Greece and Italy.

Following his talks with Italian Prime Minister Giuseppe Conte in Moscow in late October, Russian President Putin told reporters they were examining all opportunities, including connecting Italy to TurkStream via Bulgaria, Serbia, Hungary and Greece.

In late October, Serbia's Minister of Mines and Energy Aleksandar Antic said Serbia was ready to join the TurkStream pipeline project. He had said the construction of the pipeline will soon be completed, and Serbia joining the project would be a great opportunity for improving energy security for both the nation and the region.