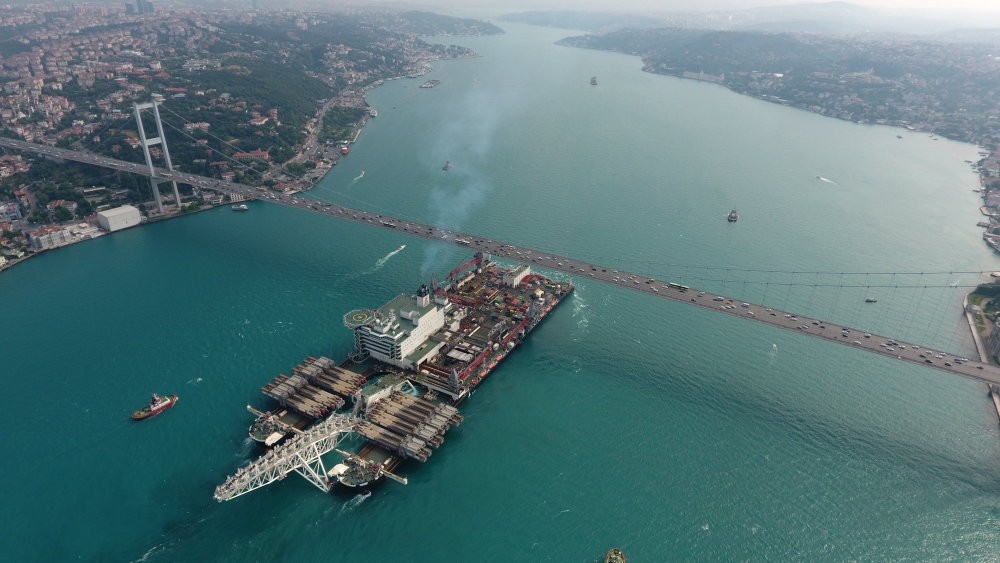 The Pioneering Spirit vessel, which completed the deep-water offshore construction of the TurkStream natural gas pipeline, passes through the Bosporus Strait under the iconic July 15 Martyrs' Bridge in Istanbul, June 24, 2017.
by Anadolu Agency Nov 22, 2018 12:00 am

With the Turkish and Russian presidents doing the honors, the last offshore section of this landmark natural gas pipeline was put into place on Monday.

"The TurkStream natural gas pipeline project will be ready to operate in 2019 after tests are carried out," Recep Tayyip Erdoğan, Turkey's president, said at a ceremony in Istanbul marking the completion of TurkStream's offshore section.

Allseas, the company that owns the ship, aimed at having the most technologically advanced construction vessel in the world, the Pioneering Spirit, which is not only designed for pipe laying but also for the installation and decommissioning of oil and gas platforms.

During the pipe laying of the two lines of the TurkStream project, 1,860 kilometers of pipes were laid in the Black Sea.

The vessel laid 6.27 kilometers of pipes in one day on Aug. 26, a new world record that by far surpassed the daily average record of 4 kilometers.

Construction of the offshore section of the project commenced in May in the Black Sea near the Russian coast.

The Audacia vessel, also owned by Allseas, which undertook construction for both strings of the gas pipeline's offshore section - carried out the pipe laying while the Pioneering Spirit initiated the project's deep subsea water construction.

The Pioneering Spirit has a maximum speed of 14 knots, can accommodate 571 employees at any given time, has 288 cabins, 13 floors, and an installed power capacity of 95,000 kilowatts.

The vessel's dimensions reflect its uniqueness as its size corresponds to that of six Boeing 747s while having the ability to lift the equivalent of 2.5 Eiffel Towers at the same time.

As befitting such a colossal vessel, even in the event of massive waves, the vessel remains stable in laying pipes, one at a time, every eight minutes.

The vessel, of which construction started in 2012, is among a fleet of other Allseas enormous vessels including the Solitaire, Audacia and Lorelay.

However, it is not all work and no play as the crew from over 40 countries has recreational areas equipped with PlayStations, televisions and facilities for various activities, such as ping pong and table football.

The majority of the fruit and vegetables, milk and canned goods are supplied by Turkey.

During the pipe-laying work, the captain expertly navigated the vessel to avoid newly discovered aircraft wrecks and archaeological pieces of interest on the seabed while ensuring that no undue delays are made in their work.

The Pioneering Spirit made its debut offshore mission in August 2016 with the removal of a mobile production platform from Norwegian waters.

The pipeline's second string will transfer gas to Europe via Turkey. Discussion between Gazprom and Bulgaria and Greece are ongoing to determine the destination point for the second line.

The project, with a total capacity of 31.5 billion cubic meters, is enough to meet the energy needs of 15 million households.