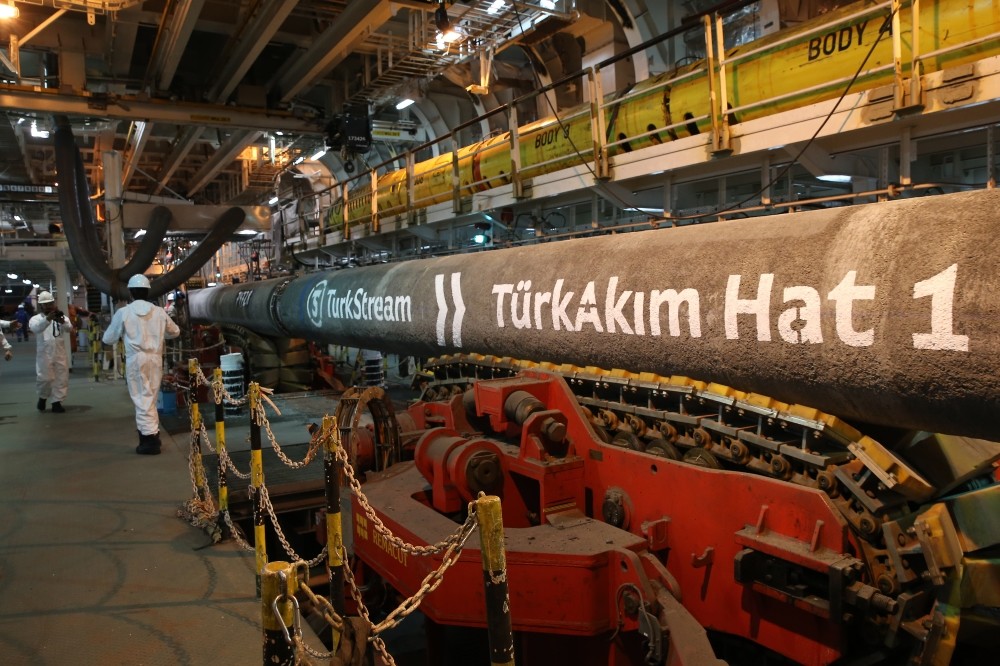 TurkStream is seen as an important step toward Turkey's ambition to establish an energy trading hub.
by Daily Sabah Nov 24, 2018 12:00 am

By serving as a key partner in multinational gas pipeline projects, intensifying efforts to liberalize the energy market and expanding storage capacities in recent years, Turkey has accelerated its moves to establish a gas trading market

Aspiring to diversify its energy resources, Turkey has accelerated its efforts to ensure its natural gas supply security through bilateral agreements and major infrastructure projects and achieve the target of becoming a gas trading hub.

Recently, the country has engaged in two important multinational natural gas pipeline projects, namely the Trans-Anatolian Natural Gas Pipeline (TANAP) and TurkStream. After the launch of TANAP, TurkStream became another gas pipeline project through which Turkey is emphasizing its interest in energy transfer and trade.

As much as Turkey is also an energy transit country because of its location between the producers and buyers, the country is fast moving toward creating a meeting hub where consumers and suppliers can trade at prices set by free market dynamics.

The first giant step in energy was taken in mid-June this year with the launch of TANAP, a multinational energy project, with partners like BP, Turkey's Petroleum Pipeline Corporation (BOTAŞ) and the State Oil Company of the Azerbaijan Republic (SOCAR).

TANAP is the largest section of the Southern Gas Corridor (SGC) project. The 1,850-kilometer TANAP and the 878-kilometer Trans Adriatic Pipeline project (TAP) were interlinked at Maritsa River located on the Turkey-Greece border.

The pipeline is seen as a move that is expected to earn Tukey political and economic prestige as it brings gas from the Shah Deniz-2 gas field to the Turkish border through Georgia via the South Caucasus Pipeline. It then connects to the TAP on Turkey's İpsala border, going on to deliver Azeri gas to European markets through pipes in Greece, Albania and the Adriatic Sea before coming ashore in Italy's south. TAP is expected to start delivering gas to European markets in the first quarter of 2020.

TANAP's initial annual capacity will be 16 billion cubic meters (bcm), from which Turkey will withdraw 6 bcm, while the remaining 10 bcm will be delivered to Europe. Its transmission capacity will be increased to 24 bcm and then to 31 bcm through additional investments.

According to the Energy Market Regulatory Authority (EMRA), Turkey imports some 6.6 bcm of natural gas from Azerbaijan per year via the Baku-Tbilisi-Erzurum pipeline. This amount will go up to 12.6 bcm as TANAP brings in an additional 6 bcm of natural gas.

The second major energy move of the year came with the TurkStream natural gas pipeline project, a landmark for Turkish-Russian energy cooperation, as a ceremony for the completion of the sea part of the project was held Monday in Istanbul with the participation of President Recep Tayyip Erdoğan and Russian President Vladimir Putin.

TurkStream is one of the vital energy projects for Turkey to become an energy trading hub and it consists of two pipelines, every 930 kilometers in length. The project was first announced by Putin in 2014 when he shared the plans for an alternative country for the South Stream project that is not a European Union member.

The TurkStream project has an annual gas delivery capacity of 31.5 billion cubic meters (bcm), each with a capacity of 15.75 bcm. While the first line will provide natural gas for the Turkish market, the second line will deliver the commodity to European countries via a route through Balkan nations.

The capacity of the first line will be enough to meet the demands of major Turkish cities, like Istanbul and other industrial hubs; therefore, it is considered an important contribution to Turkey's natural gas demand for industrial production.

The project is composed of an offshore segment of 930 kilometers and an onshore segment of 225 kilometers on Turkish land. The pipelines run between the Russian port of Anapa and Kıyıköy, in Turkish Thrace, and then as an underground pipe to the Turkish-European border.

On Thursday, Russian daily Kommersant reported that the second line of TurkStream will reach Europe via Bulgaria, Serbia, Hungary and Slovakia.

The ceremony held Monday was an important platform to reiterate Turkey's ambition to become a trading hub based on free market dynamics.

Energy and Natural Resources Minister Fatih Dönmez, speaking at the ceremony, hailed TurkStream as the opening of a new page for Turkey's energy market.

Dönmez said Turkey's aim to become an energy hub is supported through strong political will and stability in the country. "Turkey aims to become an energy center, where buyers and sellers meet and where prices are determined," he said, adding that the country is taking important steps for this goal via the TurkStream project, which he said would be a uniting factor in countries where the gas is transferred.

The project positions Turkey at the front of a complex delivery system and facilitates natural gas delivery to Europe, potentially enhancing the strategic position of the country as a gateway for European energy security.

In early September, the Energy Stock Exchange Istanbul (EPİAŞ) launched its spot natural gas trade system on the energy stock exchange in a bid to further liberalize the gas market. As part of Turkey's efforts to become a natural gas trading hub, EPİAŞ developed a software system to allow natural gas trading via an electronic platform.

After the successful completion of a five-month testing phase, the system officially went online. The new spot natural gas market system will determine the natural gas prices for the day-ahead market. The system price will be set by matching offers from suppliers with corresponding bids from market players to develop a supply and demand equilibrium price. Participants will be able to trade at least 1,000 cubic meters of natural gas per day.

Turkey has maintained its efforts to ensure access to natural gas not only through pipelines but also through all forms in the global market.

The long-term and spot liquid natural gas (LNG), which held a 20 percent share with approximately 11 bcm in the total natural gas import basket last year, is delivered to Turkey via two terminals.

There are currently two LNG terminals in Turkey, namely the Marmara Ereğlisi LNG Terminal with 5.9 million ton capacity and the Egegaz LNG Terminal with a capacity of 4.4 million tons. In addition, the two LNG Floating Storage Regasification Units (FSRU) are actively used in İzmir's Aliağa and Hatay's Dörtyol. The work on a third FSRU, which is planned to open in the Gulf of Saros, is underway. Investment agreements are underway for capacity increases in Silivri and Lake Tuz natural gas storage facilities. The capacity of the Lake Tuz Natural Gas Storage Facility, which was commissioned last year, will increase from 1.2 bcm to approximately 5.4 bcm in the medium term.

Similarly, the capacity of the Silivri facility, which can store 2.8 billion cubic meters of gas, is planned to be increased to almost 5 billion cubic meters. Thus, with a total capacity of 10 bcm in both natural gas storage facilities, the aim is to be able to store approximately 20 percent of Turkey's annual natural gas consumption by 2023. Meanwhile, the Organized Wholesale Natural Gas Sales Market (OTSP), which had been in progress for a long time with the intent of contributing to Turkey's goal of becoming a gas trade center, was commissioned in September. While it was stated that the aim was to establish and develop a fair, sustainable and foreseeable market with OTSP, an important step was taken toward the targets of becoming a regional trade center.

Turkey, which has initially guaranteed its own supply security with these moves in the sector in the recent period, continues to take firm steps to become a trade center where the price of gas is determined both in its geography and Europe.