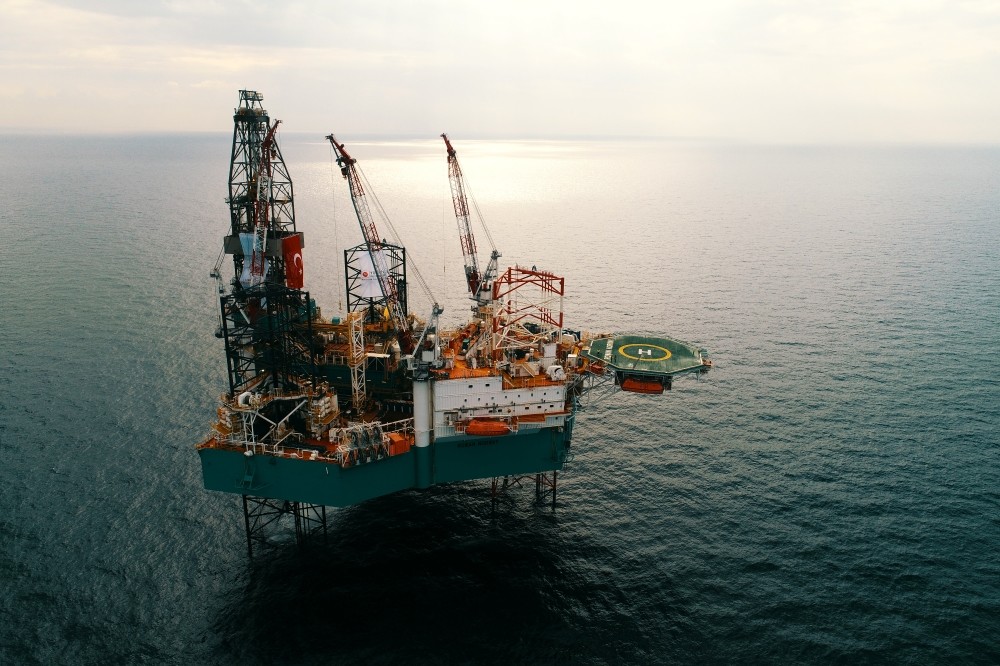 The well-drilling platform Tureky deployed in the Mediterranean began operations on Monday as part of the country's efforts to seek its rights in the region per international law.
by Daily Sabah Nov 28, 2018 12:00 am

Ankara has reiterated its determination to maintain its rights in the Mediterranean without compromise, rejecting unilateral initiatives by the Greek Cypriot administration to exploit the hydrocarbon resources with the backing of European states

The hydrocarbon-rich Mediterranean has been subject to rising tensions among regional states since the game-changing gas discoveries in 2009. The political situation in the divided Mediterranean island of Cyprus, Turkey's rights on its continental shelf and the unilateral arrangement and agreements of the Greek Cypriot administration in collaboration with European Union countries, particularly Greece, has so far complicated the political and economic settlement in the region. In the face of unilateral actions, Turkey has continued initiatives to protect its rights as well as the rights of Turkish Cypriots living on the northern part of Cyprus.

"The reckless behavior of Greece and the Greek Cypriot administration in hydrocarbon search in the eastern Mediterranean by receiving support from several European states has become a threat and danger primarily for themselves," Erdoğan said at the ruling Justice and Development Party (AK Party) parliamentary group meeting yesterday.

"Turkey is determined to use its rights arising from international law in full regarding disputes over the Aegean Sea and the Cyprus issue," the president said. "Turkey will not make the slightest concession from its theses either in the eastern Mediterranean or any other region and will defend its rights."

The president strongly emphasized that Ankara will not allow irrelevant countries to gain economic and political dominance in the eastern Mediterranean. Erdoğan also underscored that Turkey and Turkish Cypriots have legal rights in the region within the framework of international law.

According to the international maritime law of the U.N. Convention on the Law of the Sea, national territories have a continental shelf of up to 200 miles, while islands have territorial waters extending up to 12 miles. For instance, the 6th Block falls within the limits of Turkey's 200-mile continental shelf. Turkey does not recognize the agreement.

As Turkey prepares for the purchase of a second drillship due to arrive on Turkish shores in December, the country maintains its claim on the hydrocarbon resources of the Mediterranean.

Within the framework of its initiatives in the region, the country on Monday launched the drilling of a second well off the coast of Mersin. The shallow well development operations at the Kuzey Erdemli-1, located 19 nautical miles away from Mersin's shores, are expected to last for 60 days. The shallow wells will be drilled at a depth of 101 meters and 90 meters. As part of its licenses in the eastern Mediterranean, Turkey will initially drill two shallow wells, designed and planned by Turkish engineers.

Turkey's first drilling vessel, Fatih, named after Fatih Sultan Mehmet, the Ottoman conqueror of Istanbul, began drilling a well on Oct. 30 off the coast of Alanya, a district in the Mediterranean resort province of Antalya. Turkey has consistently objected to the Greek Cypriot administration's unilateral drilling activity in the eastern Mediterranean, during which it commissioned American, French and Italian energy companies like Exxon, Total and ENI, specifically in the Exclusive Economic Zone (EEZ) unilaterally declared by the Greek Cypriot Administration and consisting of 13 Blocks.

Turkey does not recognize the Greek Cypriot administration's EEZ as it violates the sovereign rights of both Turkish people and Turkish Cypriots. The country argues that the capacity of islands to generate maritime zones should be limited in competition with the continental coastal states.

As a result, Turkey's claims are partly overlapping with Cyprus' EEZ blocks 1, 4, 6 and 7. Turkey also supports Northern Cyprus' claims in blocks 1, 2, 3, 8, 9, 12 and 13, including the seabed within a few kilometers of the Aphrodite gas field, located in Block 12 of the unilaterally declared EEZ and believed to hold 3.6 trillion to 6 trillion cubic feet of natural gas.

The island of Cyprus has been divided since 1974 when decades of violence against the island's Turks were followed by a Greek Cypriot coup and Ankara's intervention as a guarantor power.

Negotiations over Cyprus resumed after the 2004 U.N.-backed Annan Plan to reunify the Turkish Cypriot and Greek Cypriot communities. The status of the island remains unresolved in spite of a series of discussions that resumed in May 2015. There has been an on-and-off peace process over recent years, the latest failed initiative having taken place in Crans-Montana, Switzerland in July 2017 under the auspices of guarantor countries Turkey, Greece and the U.K., collapsing earlier this year.

The politically unresolved situation in the ethnically split island of Cyprus escalates tension as the discoveries of natural gas resources announced by international energy firms that are one-sidedly granted exploration and rigging license without consideration of the sovereign rights of the Turkish inhabitants of the island. Therefore, the legal status of the Turkish Cypriot administration and the offshore territorial waters must be resolved with the support of the international community.