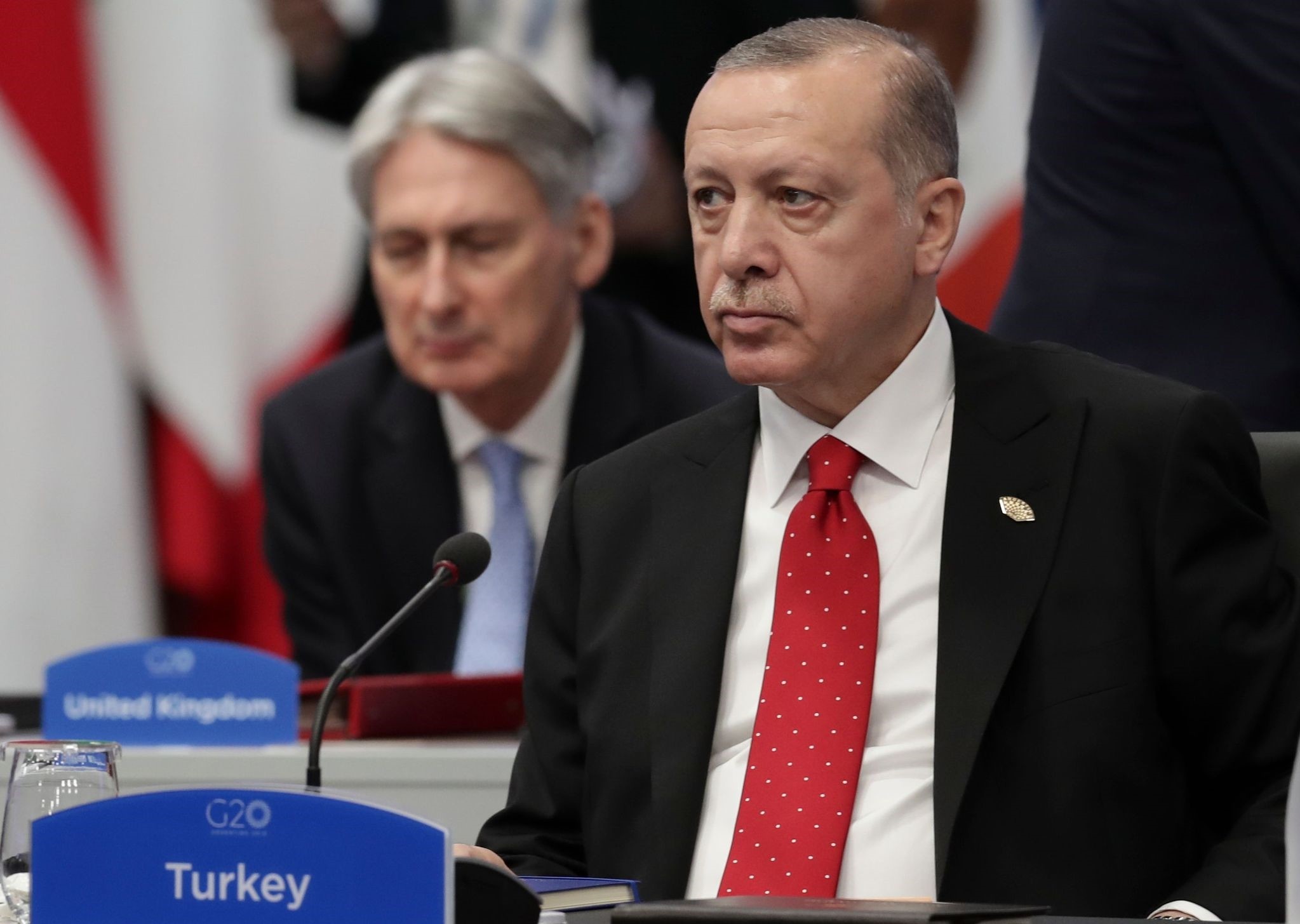 Turkey will continue taking necessary steps against policies ignoring the fundamental rights of the Turkish Cypriots regarding the natural resources in the Eastern Mediterranean, President Erdoğan has said

Ankara has once again vowed to keep taking necessary measures as long as Greek Cypriots continue their "aggressive policies" and ignore the basic rights of Turkish Cypriots.

"Turkey will to never allow the usurpation of the rights of the Turkish Republic of Northern Cyprus (TRNC), one of the original owners of hydrocarbon resources in the Eastern Mediterranean," President Recep Tayyip Erdoğan said during his news conference at the G20 summit in Argentina's capital Buenos Aires. "Turkey is committed to protecting both its own law and the rights and interests of the Turkish Cypriot community. The recent arbitration of our presence in the Eastern Mediterranean is a reflection of our uncompromising attitude at this point. As the Greek Cypriot side continues its aggressive policies that ignore the fundamental rights of the Turkish Cypriot community, we will continue to take the necessary measures," Erdoğan added.

The political situation in the divided Mediterranean island of Cyprus, Turkey's rights on its continental shelf and the unilateral arrangement and agreements of the Greek Cypriot administration in collaboration with European Union countries, particularly Greece, has so far complicated the political and economic settlement in the region. In the face of unilateral actions, Turkey has continued initiatives to protect its rights as well as the rights of Turkish Cypriots living in the northern part of Cyprus.

Negotiations over Cyprus resumed after a 2004 U.N.-backed Annan Plan to reunify the Turkish Cypriot and Greek Cypriot communities. The status of the island remains unresolved in spite of a series of discussions that resumed in May 2015. There has been an on-and-off peace process over recent years, with the latest failed initiative having taken place in Crans-Montana, Switzerland under the auspices of guarantor countries Turkey, Greece and the U.K. collapsing last year.

Moreover, speaking of the G20 summit, Erdoğan reported that they discussed what can be done in order to eliminate the risks and threats countries face both in the economy and with other issues that directly concern the global economy. The president stressed that energy is an important issue for Turkey.

"We are contributing to the energy supply security of Europe through projects such as the Trans-Anatolian Natural Gas Pipeline Project (TANAP) and TurkStream on the one hand, while meeting our increasing energy needs in line with our economic growth on the other. In the coming period, we will continue to strive for the transportation of the Caspian energy resources to the Western countries through our country," Erdoğan noted.

Dubbed as the "Silk Road of Energy," the historic TANAP project was officially launched on June 12 at a grand ceremony in the central province of Eskişehir. The backbone of the multinational European Commission energy project Southern Gas Corridor (SGC), delivering Shah Deniz 2 gas from Azerbaijan to Turkey and onto Europe, TANAP brought its first gas to Turkey on July 1 this year.

On the other hand, the TurkStream project is an export gas pipeline set to cross beneath the Black Sea from Russia to Turkey and extend to Turkey's borders with neighboring countries. TurkStream, of which the sea part was completed on Nov. 19 and a ceremony was held with the participation of President Erdoğan and his Russian counterpart Vladimir Putin, is composed of an offshore segment of 930 kilometers and an onshore segment of 225 kilometers on Turkish land.

Meanwhile, President Erdoğan met his Russian counterpart Putin on the sidelines of the G20 summit on Saturday.

"Our talks regarding TurkStream are of great importance," Erdoğan said before their meeting. For his part, Putin hailed "significant progress" in cooperation with Turk

ey, recalling his last meeting with the Turkish president in Istanbul. "After the Istanbul meeting we receive very good signals about this progress," he said, labeling the meeting as "an indicator of our fruitful cooperation."

Putin noted that the TurkStream natural gas pipeline project has a big contribution to ensuring the national economy and energy security. Stressing on a "steady increase" in trade relations between Ankara and Moscow, Putin reiterated that Turkey is a "reliable partner" in global trade and cooperation.

Touching on the issue of visa exemption with Russia, Erdoğan said, "Putin gave the decision for partial abolition of visas following meetings and talks held by our friends. Of course, we demanded that this decision be taken for the whole process."

The president also said that as of the end of October, about 5.7 million Russian tourists visited Turkey, adding by the year-end this number will reach 6 million and will further increase next year.

"The steps we take in the defense industry and the mutual solidarity are also developing quite well," Erdoğan said. "The trade volume we set with Russia is rather high. We agreed on reaching $100 billion in trade volume. Right now, we are progressing very well, and this will continue to move forward quickly."

In his address, President Erdoğan recalled that the climate issue is among the topics that the G20 attaches special importance to.

"As one of the countries with the lowest emission rate among G20 members, we have made the necessary contribution in this field and we continue to do so," President Erdoğan continued. "We have stated once again that we expect the commitments given to us under the Paris Agreement be fulfilled. We underlined the fact that the developed countries, which are the main causers of the problem, should put their hands under the stone and assume more responsibility."

Pointing out that this year's G20 summit is held at a time when trade wars are discussed rather than cooperation in the global economy, Erdoğan said that the rules and principles of the World Trade Organization (WTO) have been seriously worn away in this process.

World trade has gradually ceased to serve as a predicta

ble structure with certain rules and adopted a more chaotic image, the president said, noting that the notion of "I did it, so there it is" harms not only trade, but also the institutions which are the fruits of a long process.

Erdoğan stated that Turkey, the world's 17th largest economy, advocates the fact that the WTO should be renewed in accordance with changing conditions. He said the changing dynamics of global trade have made some rearrangements in the structure of World Trade Organization essential, underlining that this is a process that should be run with common sense rather than destructive and disruptive unilateral steps that bring chaos.