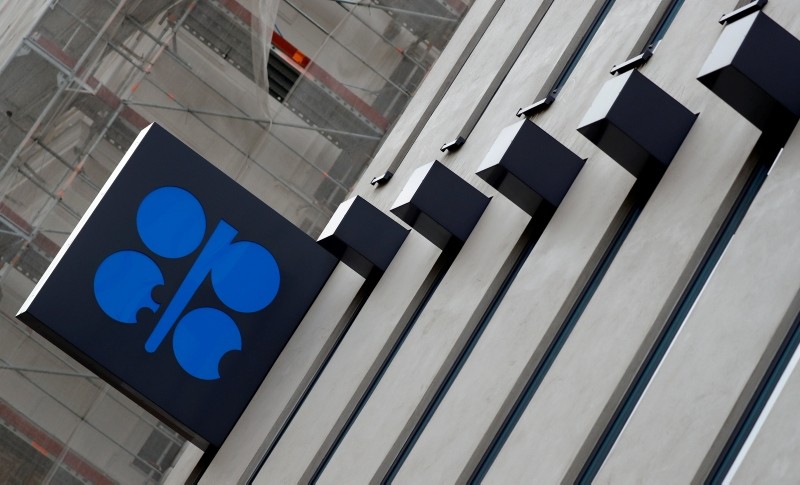 The logo of the Organization of the Petroleum Exporting Countries (OPEC) is seen outside their headquarters in Vienna, Austria December 7, 2018. (Reuters Photo)
by Dec 07, 2018 12:00 am

Iran gave OPEC the green light on Friday to cut oil output by around 0.8 million barrels per day from 2019, an OPEC source said, boosting the oil prices by 5 percent.

OPEC will later ask non-OPEC producers to contribute an additional 0.4 million bpd to the cuts, the source said.

Prices fell almost 3 percent on Thursday after the Organization of the Petroleum Exporting Countries ended a meeting in Vienna with only a tentative deal to tackle weak prices. Talks with other producers were held on Friday.

Oil prices have plunged 30 percent since October as supply has surged and global demand growth has weakened.

But Iran gave OPEC the green light after finding a compromise with rival Saudi Arabia over a possible exemption from the cuts, an OPEC source said.

A Russian Energy Ministry source said Moscow was ready to contribute a cut of around 200,000 bpd and sources said other non-OPEC producers could contribute a further 200,000 bpd of output cuts, bringing an overall cut to 1.2 million bpd.

"(A cut of) 1.2 million bpd, if implemented promptly and fully, should be enough to largely attenuate, but not eliminate, expected implied global inventory builds in the first half of next year," BNP Paribas strategist Harry Tchilinguirian told Reuters Global Oil Forum.

"Given how much expectations were downplayed yesterday, this comes as a welcome surprise for the market," he added.

Oil output from the world's biggest producers - OPEC, Russia and the United States - has increased by 3.3 million bpd since the end of 2017 to 56.38 million bpd, meeting almost 60 percent of global consumption.

The surge is mainly due to soaring U.S. oil production, which has jumped by 2.5 million bpd since early 2016 to a record 11.7 million bpd, making the United States the world's biggest producer.