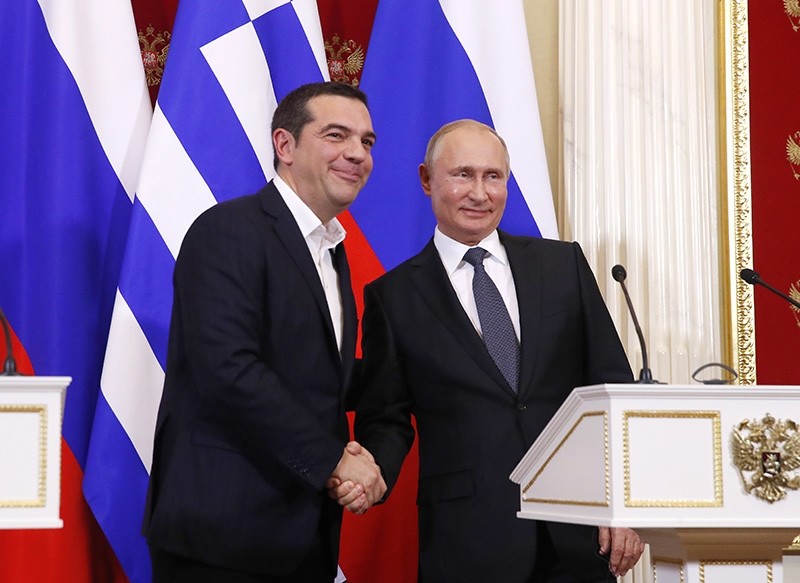 Putin and Tsipras held a joint press conference amid the prime minister's visit to the Russian capital, the first meeting since the escalation of tensions between Athens and Moscow in the summer over Russia's alleged efforts to thwart a historic deal with Macedonia.

"We are ready to implement important projects with Greece. Connecting southern Europe to TurkStream through Greece is among them. We are discussing this topic with both our Greek and Turkish partners," Putin said.

Putin said that a pipeline extending from Greece to Italy has been built but has not yet started to deliver gas. "We need to think about how we are going to transfer the gas to this line. This issue should be reviewed in detail, especially in terms of economic compliance," he said.

Tsipras reiterated his country's interest in the project and criticized the European Union's double standard approach to the pipeline.

TurkStream, which consists of two pipelines, is a vital energy project creating Turkey into an energy-trading hub. The project is composed of a 930-kilometer-long offshore segment and a 225-kilometer-long segment on Turkish land. Its total annual gas delivery capacity is 31.5 billion cubic meters (bcm), each line with a capacity of 15.75 bcm. The first line will begin providing natural gas to the Turkish market by the end of 2019, while the second line will deliver energy to European countries via a route through Balkan nations.

Greece has made it its interest in the project clear in recent discussions and official speeches. In early November, the issue was discussed at the meeting between Greek Deputy Prime Minister Yannis Dragasakis and Russian Ambassador to Athens Andrey Maslov. On Nov. 15, Tsipras spoke about the pipeline at a summit in Thessaloniki.