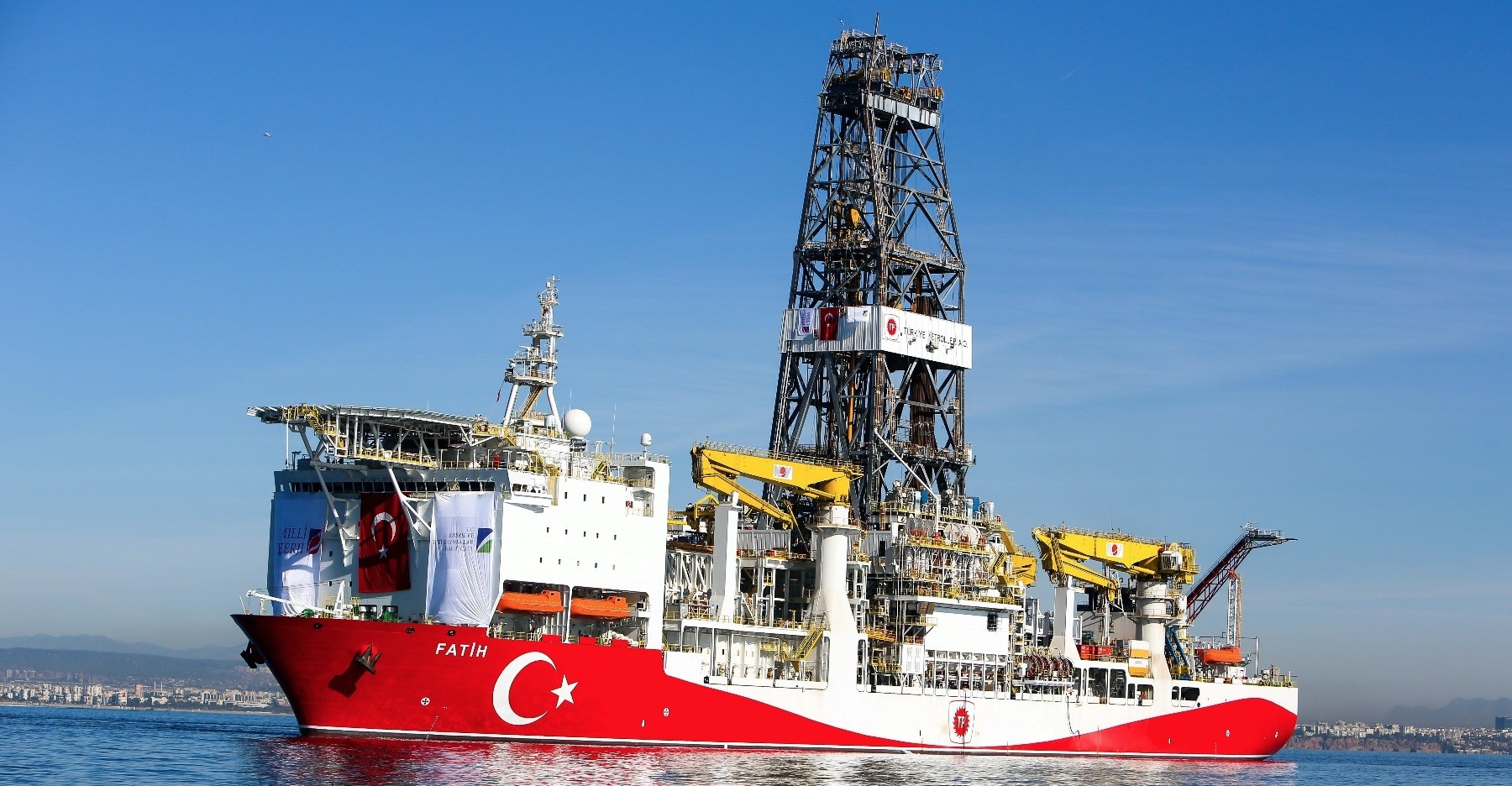 The launch of international projects, the acceleration of drilling and seismic surveys, the boosting of storage capacities and the nuclear journey have been the most exciting news for the Turkish energy market in 2018

As much as the action in the international energy markets, 2018 has witnessed major developments in the Turkish energy industry. The initiation of drilling operations in the Mediterranean with Turkey's first drillship Fatih, the beginning of the construction of the country's first nuclear power plant, the launch of the Trans-Anatolian Natural Gas Pipeline (TANAP), the inauguration of a new petrochemical facility in the western Turkish province of İzmir, and the operation of the second liquefied natural gas (LNG) floating storage and regasification unit (FSRU) in the Mediterranean, have been the most significant events transforming the Turkish energy sector.

All of this has brought the country closer to its goal to increase self-sufficiency in energy as well as instituting a trading hub. The 1,850-kilometer-long TANAP is the largest section of the 3,500 kilometer-long Southern Gas Corridor (SGC) that was officially inaugurated during a ceremony held in Baku on May 29 with the participation of Azerbaijani President Ilham Aliyev.

TANAP, with around $8 billion of investment, will deliver 6 billion cubic meters (bcm)from the giant Shah Deniz II field in Azerbaijan to Turkey and 10 billion to Europe per year. The European part of the project is expected to become operational in 2020, upon the completion of the Trans Adriatic Pipeline (TAP), which will connect with TANAP at the Turkish-Greek border. 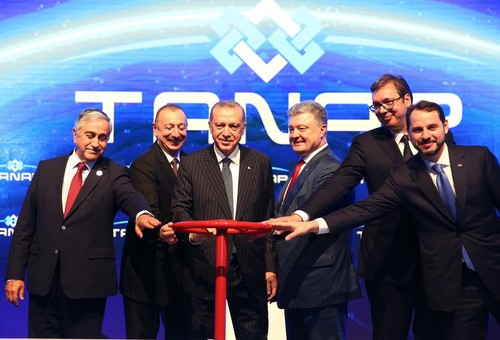 President Recep Tayyip Erdoğan inaugurated the TANAP project on June 12 in the northwestern city of Eskişehir, where the project's compressor station is located.

Turkey has the remaining 7 percent stake.

On Friday, Oct. 19, Turkey's biggest oil refinery, STAR, officially opened in the western coastal province of İzmir with the attendance of President Erdoğan and his Azerbaijani counterpart, as well as other top officials from both countries.

STAR is SOCAR Turkey's biggest investment in the country at a cost of $6.3 billion.

The refinery, which has a crude oil processing capacity of 10 million tons, started its operations back on Aug. 3 with the arrival of the refinery's first crude oil cargo ship Absheron, loaded with 80,000 tons of feedstock.

In 2018, refining of around 2 million tons of crude oil was expected at the refinery, which will increase to 10 million tons at full capacity.

According to the official website of Turkey's leading petrochemical company, PETKIM, the STAR Refinery will meet more than 25 percent of Turkey's processed oil products needs upon start-up.

Alexander Medvedev, deputy chairman of Russia's gas giant Gazprom and the TurkStream project constructor, said in 2018 the company would almost double its investments in the TurkStream gas pipeline project compared to 2017 when 92.8 billion rubles was spent.

On Jan. 15, Gazprom announced the company's plans to invest 182.4 billion rubles ($3.2 billion) in 2018 for the pipeline project to send Russian gas to Europe via Turkey.

On Jan. 29, more than half of the first line of the TurkStream natural gas pipeline project to deliver 35 percent of Turkey's gas needs had been completed, Gazprom officials said while on-site at Novy Urengoy, Russia's biggest gas field and the world's second-biggest field located in northern Russia.

On Aug. 8, Gazprom laid down 1,500 kilometers of the pipeline's length across two lines, corresponding to about 80 percent of the total length of the pipeline, Gazprom CEO Alexei Miller confirmed.

Also in August, the world's largest construction and heavy-lift vessel, Pioneering Spirit, which is currently laying the second line of the TurkStream project, set a new world record in offshore pipe laying on Aug. 26, Gazprom confirmed.

Gazprom said on its official Instagram account that the vessel, which belongs to the Allseas company, laid 6.27 kilometers of pipes per day on Aug. 26, surpassing the average of four kilometers per day.

The first line of the TurkStream reached the Turkish shore off Kıyıköy in northwest Turkey on April 29 and the launch of the second line is expected in 2019.

On Nov. 19, Erdoğan announced during a ceremony in Istanbul marking the completion of TurkStream's offshore section that the project would be ready to operate in 2019 after tests are carried out.

of natural gas from Russia while hailing this achievement as a success for both countries in the energy field. He added that Turkey's goal is to reach an annual trade volume of $100 billion with Russia.

As part of Turkey's efforts to become a natural gas trading hub, EPİAŞ developed a software system to allow natural gas trading via an electronic platform. After the successful completion of a five-month testing phase, the system officially went online.

The new system is expected to bring competition, supply diversification and high quality to the natural gas market.

The new spot natural gas market system will determine the natural gas prices for the day-ahead market. The system price will be set by matching offers from suppliers with corresponding bids from market players to develop a supply and demand equilibrium price. Participants will be able to trade at least 1,000 cubic meters of natural gas per day.

On July 27, EPİAŞ began to publish natural gas transmission data through its online transparency platform. It also started to share transport nomination, virtual trade, capacity, reserve, actualization and stock amounts, on a daily basis. Previously, on April 1, EPİAŞ launched online testing of its spot natural gas trade system on the energy stock exchange to improve the electronic system, before it goes officially online. Turkey aims to take concrete steps to utilize its geopolitical position near oil and gas-rich countries in the Middle East, Caspian and Central Asia to become an energy-trading hub. 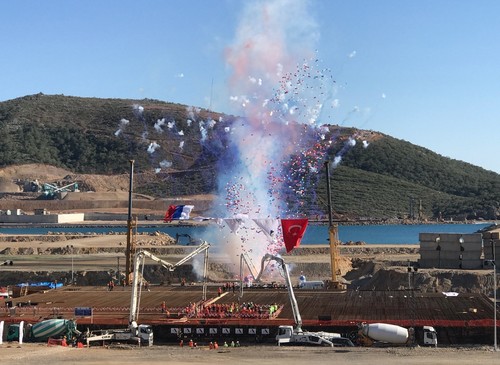 Turkey's first nuclear power plant Akkuyu, on Dec. 14, was granted a "limited works permit" for the construction of the plant's second unit.

Receiving the permit is an important stage in the licensing of Akkuyu NPP second unit's construction, Rosatom's statement read.

On Sept. 10, Rosatom announced that a new construction contracting company joined the partners for the construction of the plant. According to the company's statement, the new participant company, Titan-2 Concern, is to act as a contractor for the Atomstroyexport (ASE) company – an engineering division of Rosatom.

"Cooperation with Titan-2 Concern for the Akkuyu NPP is the next step in the company's strategy to have reliable partners for the construction and assembly at all construction facilities of ASE's engineering division," Valery Limarenko, head of ASE Company and the Engineering Division of Rosatom State Corporation, said.

The NPP was also granted an electricity generation license for a period of 49 years from the Turkish Energy Market Regulatory Authority (EMRA) on June 15.

Turkey's first drilling vessel, Fatih, arrived near the city of Antalya on late Wednesday, June 6 in order to start the country's first deep drilling project in the Mediterranean. Former Energy and Natural Resources Minister Berat Albayrak said on May 31 at an official sailing ceremony in the Kocaeli province that the vessel would conduct drilling at a depth of 2,600 meters in the Mediterranean, and hailed it as a historical step for Turkey.

On Dec. 8, the new Energy Minister Fatih Dönmez announced a second drilling vessel that was purchased by Turkey was expected to arrive in the Mediterranean waters by the end of January 2019.

Barbaros Hayrettin Paşa, Turkey's first seismic vessel, was bought from Norway in 2013, and has been conducting surveys in the Mediterranean since April 2017.

MTA Oruç Reis was built by Turkish engineers in a local shipyard in Istanbul and has been in operation since late June 2017.

Dönmez announced that Turkey started its first deep-sea drilling offshore Antalya on the Mediterranean coast on Oct. 30, while drilling in offshore Mersin started on Nov. 26. The minister also said the second drillship will come to Turkey in late January and start operations in the Mediterranean next year.

The facility at full capacity will have 60 caverns by 2023. The launch of the second phase of the project will open an additional 48 caverns.

On Feb. 8, Turkey began operations of its second floating liquefied natural gas unit with 20 million cubic meters of send-out capacity per day. The FSRU docked at a port in Dörtyol, Hatay – a province in the Mediterranean region. The country aims to reduce dependency on pipeline gas through FSRUs, and therefore, these units are docked at ports close to regions with higher gas consumption.

Turkey's first FSRU was launched in Aliağa district of Aegean province of İzmir in December 2016 at a time when the country needed extra gas capacity to meet the increased consumption due to the very cold weather conditions at that time.