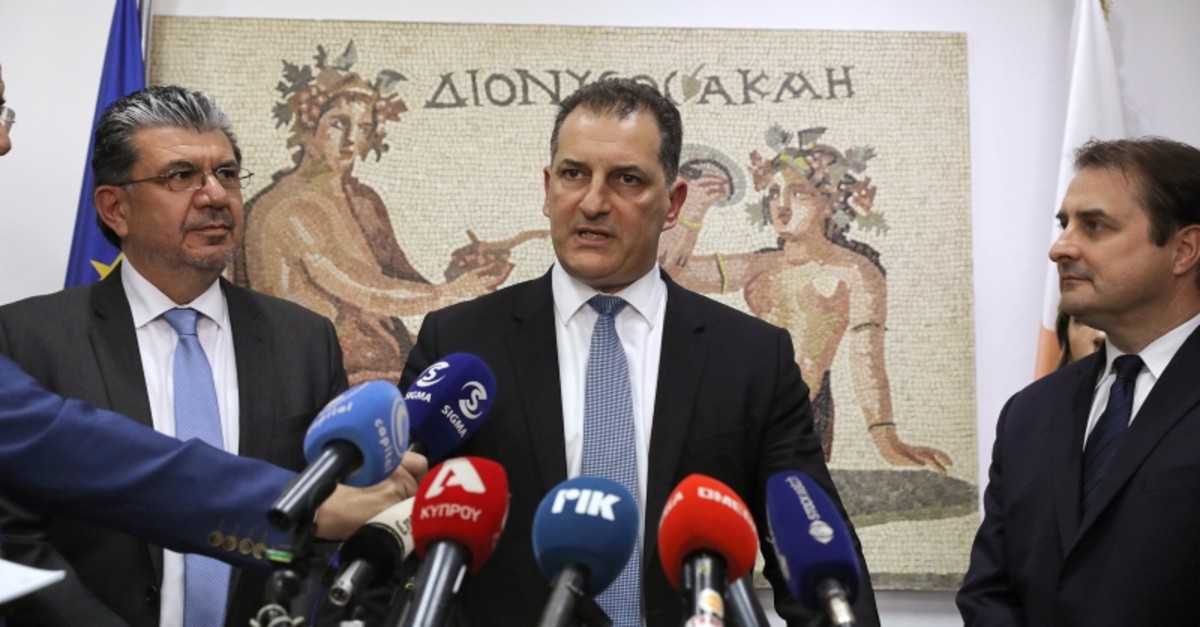 Greek Cypriot Minister of Energy, Yiorgos Lakkotrypis, speaks during a news conference while Tristan Aspray, ExxonMobil's Vice President of Exploration for Europe, Russia and the Caspian, looks on in Nicosia, Feb. 28, 2019. (Reuters Photo)
by Daily Sabah with Agencies
Feb 28, 2019 4:04 pm

Announcing the results Thursday of exploratory drilling, Energy Minister Georgios Lakkotrypis said the "world class" discovery offers proof of the potential for more hydrocarbon discoveries in waters off the east Mediterranean island nation that could become an alternative energy source for Europe.

The discovery in the so-called Block 10 located southwest of the island and near the border of exclusive economic zone claimed by the Greek Cypriot Administration and Egypt, is estimated to contain 5-8 trillion feet of gas (142 billion to 227 billion cubic meters). 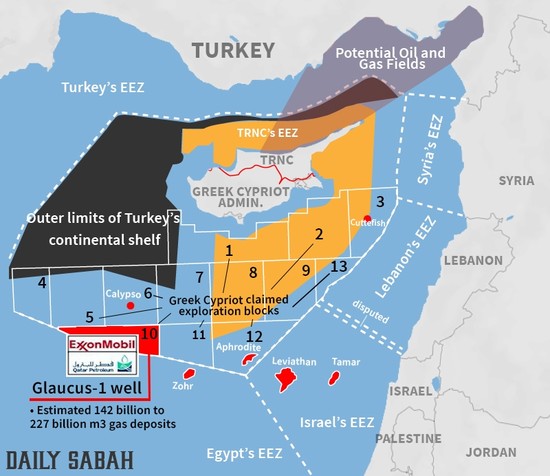 ExxonMobil Vice President Tristan Aspray said construction of a plant on Greek Cyprus to process gas exports is an option.

Aspray said ExxonMobil is interested in searching for more gas elsewhere off the southern coastline of the island of Cyprus. ExxonMobil is partners with Qatar Petroleum in carrying out exploratory drilling off the Mediterranean island.

"We will be spending the next several months analysing all data we have gathered so we can better define the full commercial potential of the resource and map out the most appropriate path for a further appraisal," he told journalists.

"These are encouraging results in a frontier exploration area," said Steve Greenlee, president of ExxonMobil Exploration Company. "The potential for this newly discovered resource to serve as an energy source for regional and global markets will be evaluated further."

Glaucus-1 was the second of a two-well drilling program in Block 10. The first well, Delphyne-1, did not encounter commercial quantities of hydrocarbons.

Last year Italy's ENI and France's Total said they had found a promising prospect of natural gas in a nearby concession, Calypso.

Greek Cyprus has one gas field, Aphrodite, which contains an estimated 4 trillion cubic feet of gas discovered to the south of the island in 2011.

The Greek Cypriots previously invited ExxonMobil to bid on other unexplored blocks in the region.

The Stena Icemax, a drillship leased by ExxonMobil, arrived in the offshore Block 10 of the Cyprus Island to conduct upstream activities last November.

The ship began preparatory works for drilling as of Nov. 15 despite Turkey's warnings to the Greek Cypriot administration to avoid unilateral upstream activities around the island.

These planned unilateral activities have angered Turkey, a guarantor of the Cypriot island, and on Nov. 4, Turkish President Recep Tayyip Erdoğan warned that Turkey would never allow attempts to extort natural resources in the Eastern Mediterranean region without including the Turkish Republic of Northern Cyprus (TRNC) and Turkey as guarantor.

Turkish Foreign Ministry spokesperson Hami Aksoy also stressed that ExxonMobil's exploration activities in the Block 10 area do not contribute to the region's stability.

"We seize this opportunity to reiterate our warning towards the companies involved in the unilateral exploration and exploitation activities of the Greek Cypriot Administration," Aksoy said.

He said Turkey, as in the past, would continue to take the necessary diplomatic and political steps in coordination with the Turkish Cypriots to protect "the rights and interests of the Turkish Cypriot people" that he described as "the equal owners of the Island".

The island of Cyprus has been divided since 1974, when a Greek Cypriot coup took place after decades of violence against the island's Turkish community and Ankara's intervention as a guarantor power.

The status of the island remains unresolved in spite of a series of discussions.

Perched on the maritime edge of two huge gas finds in the Levant Basin, Leviathan off Israel and Zohr off Egypt, both the Turkish and Greek sides of Cyprus still rely on heavy and expensive fuel oil for its power stations.