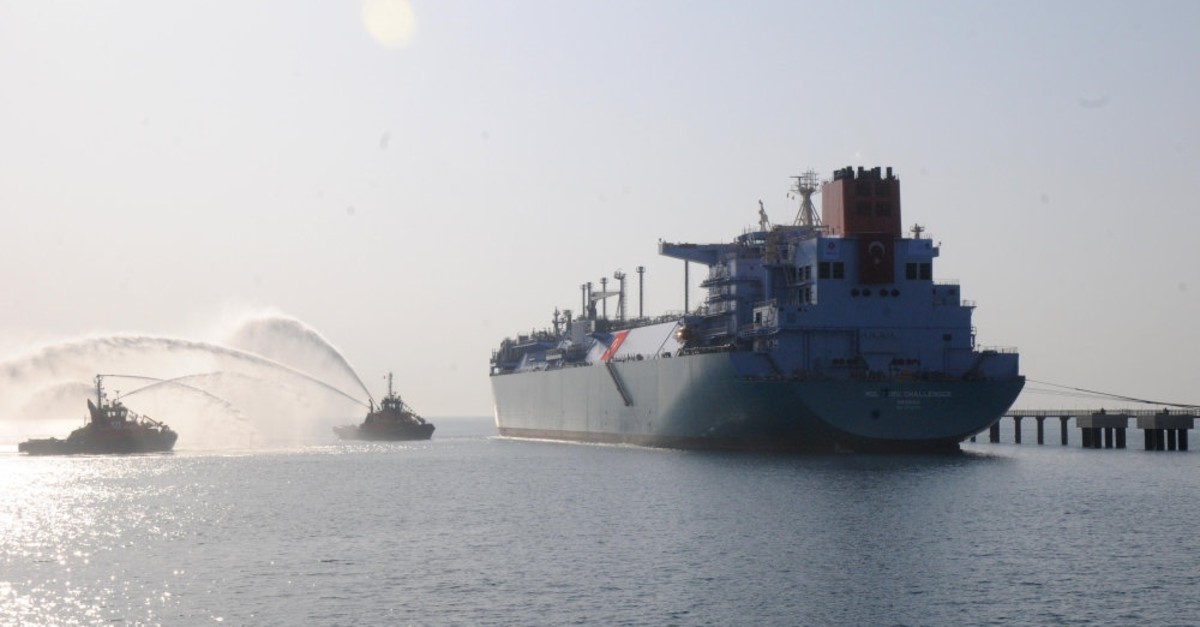 Turkeyu2019s second FSRU operated by BOTAu015e was commissioned in January 2018 at the Du00f6rtyol district of southeastern Turkeyu2019s Hatay province on the Mediterranean coast. It has a storage capacity of 263,000 cubic meters u2013 the largest in the world.
by Elif Binici Erşen Mar 22, 2019 12:09 am

The expansion of capacity storage, diversification of suppliers and infrastructure investments have empowered Turkey's hand as a gas importer in a global environment of pouring supply, while the country is also ramping up efforts to become a regional gas trading hub

The global gas market sees and will continue to see dramatic increases in the supplies of liquefied natural gas (LNG) in the upcoming years. The three big producers – Qatar, Australia and the U.S. – as well as others are expected to increase their production capacities, sending out copious amounts of resources and vying for a larger share in the market with fierce competition. This abundance, without a doubt, will offer advantageous terms for importers like Turkey that has foreseen the coming age of LNG and reinforced its storage and regasification capacity with infrastructure projects. "Turkey is one of the most prepared countries for the enormous amount of gas supplies coming from big producers," International Energy Agency (IEA) Executive Director Fatih Birol told Daily Sabah in an exclusive interview on the sidelines of the world's top energy event, CERAWeek, held in Houston last week. Birol strongly emphasized that the global gas trade is swiftly shifting toward LNG from delivery via pipelines. In the last decade, the share of LNG trade rose to 26 percent from 13 percent. In the global outlook report released in February, BP also said the LNG trade is forecast to more than double, reaching almost 900 billion cubic meters in 2040, which was around 400 billion cubic meters in 2017.

Providing striking data, Birol said that 49 countries would be trading LNG by the end of this year, while only 8 countries were in the market as suppliers back in 2000. "Three countries will stand out as the biggest suppliers. The U.S., Australia and Qatar," he said and added Egypt and Nigeria will also continue exporting, but their capacity will be limited compared to these three market transformers.

Previously, the world's largest LNG supplier Qatar said it was adding a fourth LNG production line to raise its output capacity from the North Field, to 110 million tons a year, corresponding to an increase of around 43 percent from its current production capacity of 77 million tons per year. Moreover, the IEA predicts that the U.S. LNG export capacity will reach 8.9 billion cubic feet per day (2.5 billion cubic meters per day and 912.5 billion cubic meters per year) by the end of 2019. Australia de-crowned Qatar as the world's largest exporter of LNG for the first time in November 2018, data from Refinitiv Eikon shows according to a Reuters report. According to various reports, Australia produced 83 million tons per year for nameplate liquefaction capacity. 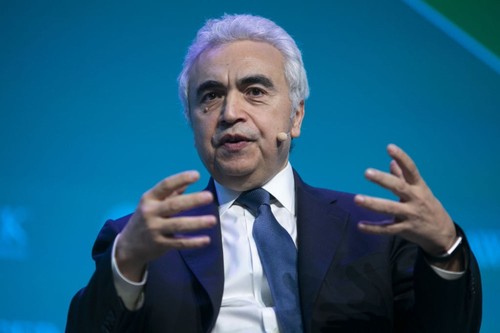 With this imminent abundance, Turkey took important steps to reinforce its LNG infrastructure, increasing its storage and regasification capacity under the leadership of former Energy and Natural Resources Minister Berat Albayrak, who is serving now as the treasury and finance minister, during the previous government, Birol stressed. Projects that follow the former policies have enabled Turkey to well prepare for the global LNG glut, he added. When asked about the advantages of changing market dynamics, Birol noted that Turkey is now able to purchase LNG at more auspicious and lucrative terms. More importantly, he went on to explain, even if Turkey does not buy more LNG, the availability of the resource and the option for buying will give strong leverage to the country in negotiations for contracts for pipeline gas. The benefits of resource availability have already enabled European countries to save billions of dollars in their negotiations for pipeline gas contracts in the last eight years, he said. In nearly 30 contracts, Birol noted, importers have become more advantageous parties in the said period of time. "Turkey will also benefit from these changing market conditions," he said. However, had it not prepared a strong infrastructure, the case would not have been so.

Some of Turkey's long-term gas contracts will expire in 2021, and the number of gas imports stipulated in those contracts total 16 billion cubic meters, corresponding to nearly 30 percent of the approximately 55 billion cubic meters of domestic gas consumption per year, according to the Energy Market Regulatory Authority (EMRA).

Currently, Turkey operates four LNG terminals – two of them are floating storage and regasification units (FSRU) and the remaining two are land facilities. The LNG terminal in Marmara Ereğlisi, located 120 kilometers west of Istanbul in the northern Marmara Sea, currently operates with a capacity of 5.9 million tons. The terminal is capable of sending out 8 billion cubic meters per year. Another land terminal is located in the industrial Aliağa district of the Aegean province of İzmir with a capacity of 4.4 million tons of LNG. The İzmir terminal operated by Egegaz has a regasification and compression capacity for 6 billion cubic meters per year.

Speaking of Turkey's potential to become a gas-trading hub, Birol drew attention to Turkey's significant location surrounded by vast hydrocarbon resources and said that Turkey should not remain an energy transit country.

"I believe that Turkey could become an energy trading hub, not only as an oil and gas transit country to ensure its own and regional energy security," IEA Executive Director Birol said. To become a gas-trading hub, Turkey needs to improve its LNG infrastructure more and increase the storage capacity exponentially, he added, while ensuring a more saturated market. "If we take into consideration Turkey's geographic location surrounded by gas producers and its proximity to consumer markets in Europe as well as the recent steps to empower LNG infrastructure, that goal to become a gas trading hub is not far away," the IEA head said and added, "A gas-trading hub Turkey will also boost regional energy security."

In September 2018, the Energy Stock Exchange (EPİAŞ) launched a gas stock exchange that is currently used by an increasing number of natural gas traders as well as Turkey's Petroleum Pipeline Corporation Company (BOTAŞ) to supply natural gas to balance the transmission system. This evolving platform also offers a daily reference price for the gas market.

With different pipeline routes coming from Russia, Azerbaijan and Iran as well as LNG supplies from the U.S., Algeria, Qatar, Nigeria and others, Turkey is one of the big gas markets in its region with 55 billion cubic meters per year. In addition to ensuring supply diversity, Turkey has already started working on capacity expansion for storage to ensure a more stable market in supply and demand curves. Moreover, to establish a well-functioning gas trading hub, Turkey should also develop hedging mechanism for traders against currency fluctuations since imports are paid for in foreign currency and contracts are still by and large oil-indexed.

As much as gas and oil, Turkey has also paid significant importance to its renewable energy resource development. IEA head Birol also suggested that Turkey should sustain efforts to improve its renewable capacity, embracing more projects. "Turkey is indeed very rich in onshore and offshore wind and solar power. It needs to initiate more projects to exploit these resources and implement necessary legislative requirements," Birol noted.

The IEA executive director particularly underscored the importance of creating financial stability for renewable energy projects. "First of all, financial setbacks must be ascertained and new financing models must be developed accordingly," he pointed out. "Economic facts are stubborn," he said and continued, "It is clear that foreign and local investors will joint forces and invest in Turkey's rich wind and solar power." In accordance with the rising investments, Birol said, the share of renewables in Turkey's power generation will profoundly rise in the coming years," sharing his forecast.

Turkey's renewable energy sector has seen significant growth over the last 15 years, with an intensified performance from 2013 to 2018, during which onshore wind and solar power plants increased exponentially. The wind power capacity alone reached 7,000 MW by the end of November 2018, and a major portion of this capacity, 5,700 MW, started operating in the period of 2013 to 2018.

The Renewable Energy Resource Area (YEKA) mechanism was introduced in March 2017 with the first 1,000-megawatt (MW) solar power YEKA project. While the Turkish-South Korea consortium of Kalyon and Hanwha won the contract, the South Korean partner was reported to have withdrawn from the project in February, but no official statement has been announced yet.

The second YEKA mechanism was implemented for a 1,000 MW wind power plant project that was contracted to a Turkish-German consortium consisting of Kalyon, Türkerler and Siemens. Following the first 1,000 MW wind power YEKA, the government planned to hold four 250-megawatt for plants in Balıkesir, Çanakkale, Aydın and Muğla with an investment volume of around $1 billion.

After single-area large renewable plants, Turkey decided to hold the YEKA tenders in smaller portions. For instance, the government planned solar power YEKA projects in three regions, Şanlıurfa, Niğde and Hatay; however, in early January, the tender was canceled. Following the first 1,000 MW wind power YEKA, the government planned to hold tenders for four 250-megawatt plants in Balıkesir, Çanakkale, Aydın and Muğla with an investment volume of around $1 billion.