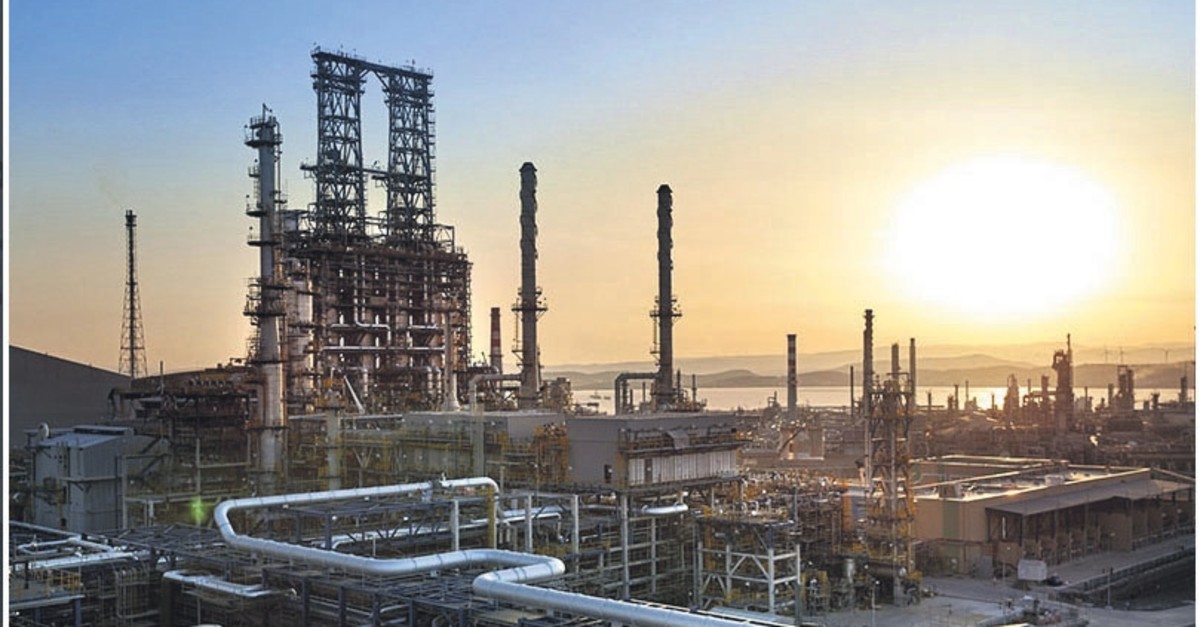 All tests on the State Oil Company of Azerbaijan Republic's (SOCAR) Turkey Aegean Refinery (STAR) have been completed and the refinery will start working on full capacity soon, according to the General Manager of STAR Refinery, Mesut İlter, who said the refinery will be exporting around $500 million of petrochemical raw materials per year.

The largest single-location real sector investment in Turkey, the $6.3-billion STAR facility, located in the Aliağa peninsula in the Aegean province of İzmir, is poised to be one of the biggest petroleum and gas operations in Europe, the Middle East and Africa.

"Once the refinery reaches full capacity, it will meet all [of] Petkim's [petrochemical company] need for raw materials. Until the second petrochemical plant planned to be built by SOCAR Turkey is launched, we will export about $500 million worth petrochemical raw materials annually," İlter told Anadolu Agency (AA).

He recalled that the STAR Refinery was inaugurated at a ceremony attended by President Recep Tayyip Erdoğan and his Azerbaijani counterpart İlham Aliyev on Oct. 19 of last year.

İlter expressed that the refinery, with a capacity for processing 10 million tons of crude oil annually, was commissioned gradually, saying that, while increasing capacity, improvements should be made in terms of both logistics and supply sources.

According to İlter, currently, the refinery is fully active and will have reached full capacity in a very short period of time.

Given Turkey's growth and import data in Turkey's fuel oil sector, there is always a need for new refineries, according to the STAR Refinery general manager, who emphasized that it is crucial to make potential new refinery investments with petrochemical integration.

The total output of STAR is expected to decrease Turkey's current account deficit by $1.5 billion per year, by substituting refinery imports with domestic production. Turkey meets the majority of its oil and natural gas demand through expensive energy imports, which is a major expense on the country's budget.

Pointing out that a refinery investment to be made with petrochemical integration will close the gap in fuel oil and petrochemical sectors, İlter stated that Turkey consumes some 2.2 million tons of gasoline a year versus its production of 5 million tons, and imports the rest. "Therefore, instead of building a refinery to export gasoline, it is much more important to make an investment that will reduce imports in petrochemicals. Actually, this is what makes STAR Refinery valuable," he added.

Highlighting that they believe in the Turkish economy, state institutions and consumers, he said that they, therefore, are continuing investments continuously. "I think the economy will grow by 3-4 percent in the next decade. Economic growth might decline on a yearly or periodical basis. However, given the historical data, Turkey has grown by an average of 5 percent in the past decade. Therefore, as Turkey can take rapid action against economic changes, I think this is a temporary process. I think that growth figures will be positive at least as of the second half of 2019," he concluded. The largest foreign direct investor in Turkey, SOCAR has invested around $15 billion in the 11 years since it began investing in Turkey after it acquired the country's leading petrochemical company Petkim in 2008 for $2 billion.