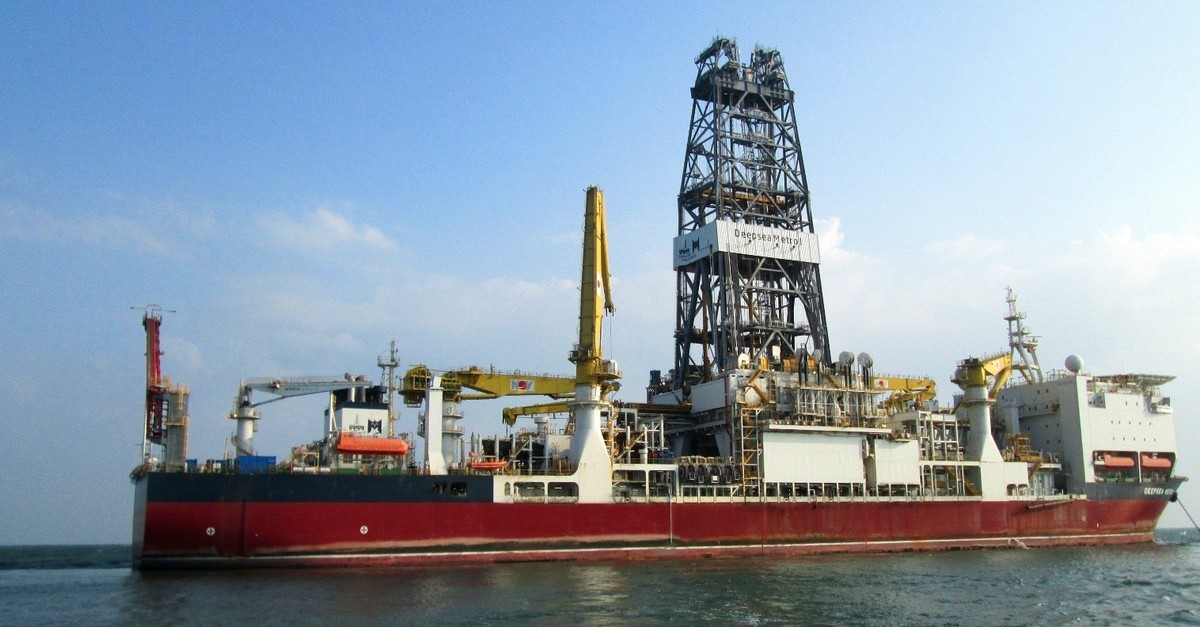 The second drilling vessel Yavuz will be dispatched to Eastern Mediterranean in July to launch operations in the region along with its twin vessel Fatih.
by Daily Sabah with Wires
Jun 03, 2019 12:04 am

Fully committed to protecting its sovereign rights in the region, Turkey is preparing to send its second drilling vessel Yavuz to the Eastern Mediterranean in July to accompany Fatih and drill a new well

Turkey's efforts to protect its sovereign rights in the Eastern Mediterranean continue without interruption as the country is preparing to dispatch its second drilling vessel Yavuz to the region. Energy and Natural Resources Minister Fatih Dönmez elaborated on Turkey's latest activities in the Eastern Mediterranean at an iftar (fast-breaking) dinner that was organized by Turkish Petroleum. The minister emphasized that Turkey's first drilling vessel will continue operations in the region as planned at the Finike-1 site. The vessel is carrying out drilling at a depth of 2,338 meters and the well drilling will last for 100 days in total, the minister explained. The second drilling vessel Yavuz, the Fatih's twin in terms of technical qualities, is also scheduled for well drilling next mont.

The sixth generation drillship Yavuz was bought by Turkish Petroleum for $262.5 million and has a length of 229 meters and weighs 21,283 gross tons. Yavuz came to a shipyard in Yalova in early March.

The minister also stated that the seismic vessel Oruç Reis is carrying out survey operations in the Sea of Marmara and the Barbaros Hayreddin Paşa is continuing to collect seismic data in Nicosia-2, one of the licensed blocks of the Turkish Republic of Northern Cyprus (TRNC).

The energy minister stressed that Turkey will adamantly continue to protect its own sovereign rights and the rights of the Turkish Cypriots in the region.

"We aim to use the hydrocarbon resources in our exclusive economic zone (EEZ) for the benefit of our people."

After Turkey sent Fatih to the west of the island of Cyprus to start drilling a second well, some of the Western countries – including the U.S., France and Greece – have expressed their objections. But Turkey repetitively highlighted that its vessel conducts operations in its own EEZ, which is registered with the United Nations in 2004 and other states should respect the rights of Turkey and Turkish Cypriots.

In 1974, following a coup aiming at Cyprus' annexation by Greece, Ankara intervened as a guarantor power. In 1983, the Turkish Republic of Northern Cyprus was founded.

The decades since have seen several attempts to resolve the dispute, all ending in failure. The latest one, held with the participation of the guarantor countries – Turkey, Greece, and the U.K. – ended in 2017 in Switzerland.

Energy Minister Dönmez explained that the Turkish Petroleum broke a 17-year record in domestic oil production by exceeding 43,500 barrels per day in 2018.

"So far this year, the daily oil production is recorded at 45,800 barrels per day… The oil reserves discovered in Siirt and Diyarbakır are estimated around 22.52 million barrels," Dönmez said.

"These discoveries will make a $700 million contribution to the Turkish economy," he added.

The minister noted that the land explorations of the Turkish Petroleum revealed a gas reserve adequate enough to meet the energy demand of 300,000 households for 10 years.

The hydraulic fracking operations continue successfully in the Mermer-1 well in Diyarbakır, which demonstrates the technological capability of Turkish Petroleum and the company's operational capability.

"We use the hydraulic fracking method in Gözalan and Batı Bostanpınar sites in the Diyarbakır and Çeşmekolu wells in Thrace," Dönmez said. He also announced that additional fracking operations will kick off this year.

The aggregate oil production of public and private companies was recorded at 4.8 million barrels in the first quarter. The natural gas production posted a 33% rise, hitting 134.5 million cubic meters in the said period.