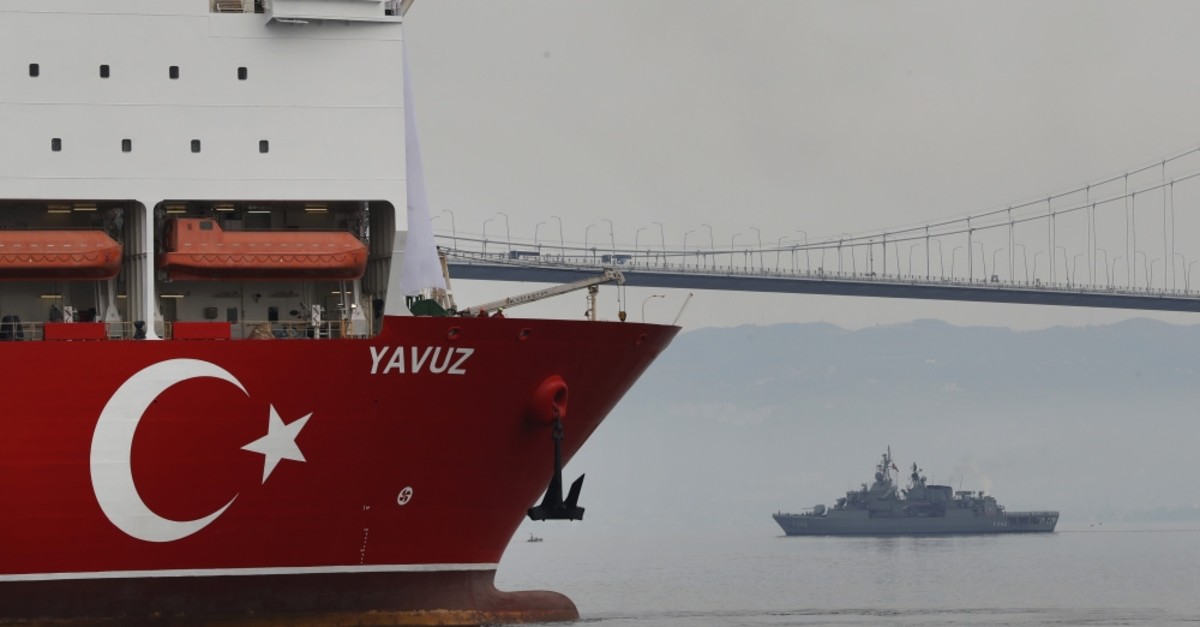 The second drilling vessel Yavuz escorted by a Turkish Navy vessel crosses the Marmara Sea on its way to the Mediterranean, from the port of Dilovasu0131, outside Istanbul, June 20, 2019.
by Daily Sabah Jul 11, 2019 12:10 am

Reiterating once again its eagerness and determination, Ankara says it will continue protecting its own rights and the interests of Turkish Cypriots in the Eastern Mediterranean as long as the Greek Cypriot side does not include Turkish Cypriots in its decision-making process on hydrocarbon resources.

"As she [Turkey] protects her own continental shelf rights in the Eastern Mediterranean, Turkey will continue to defend Turkish Cypriots' rights and interests around the island, insofar as the Greek Cypriots do not involve Turkish Cypriots in the decision making mechanisms, including revenue sharing on hydrocarbon resources, and guarantee their rights," a statement issued by the Foreign Ministry said Wednesday.

Remarks by the ministry came after Greek and European Union assertions that Turkish drilling for gas and oil off Cyprus was illegitimate and after comments by the newly appointed Greek Foreign Minister Nikos Dendias. Turkey rejected Greek and EU statements, stressing that these comments point to the usurpation of the rights of Turkish Cypriots on the island, and said it showed the EU could not be an impartial mediator on the Cyprus issue.

"It is an exemplary point of concern that these statements do not ever mention the Turkish Cypriots and as such ignore their very existence in the island despite the fact that they are one of the co-founders of the Republic of Cyprus, whose rights have been usurped since 1963," the statement by the ministry read.

It underlined that the EU has become an actor in this play of unlawfulness staged by the Greek Cypriot-Greek partnership against the rights of the Turkish Cypriots who are the co-owners of the Island.

"It has thus become clear that the European Union will not be able to assume the role of an honest broker in the negotiation processes toward the settlement of the Cyprus issue," it said.

Responding to a question by reporters on what is Turkey's short, medium and long-term strategy in the Eastern Mediterranean on the plane returning from a trip to Bosnia on Tuesday, President Recep Tayyip Erdoğan said: "The process has already begun. On the one hand, our exploration activities in the region continue, on the other hand, our drilling vessels were directed to the region. Both the Fatih and the Yavuz are in the region at the moment and they will also start their work."

Erdoğan emphasized that Turkey "is not in an endeavor to work on someone's field there. We are taking steps there especially to defend the rights of our Turkish brothers in Northern Cyprus. All people living in Cyprus have rights in all areas there. What is this right? They all have equal rights to them, whether it be water products or oil, and we are working to protect their rights."

"Either the wealth is fairly shared, a common solution is found, or Turkey will continue to defend Turkish Cypriots' rights," Mevlüt Çavuşoğlu told a news conference in the capital Ankara.

Underlining that Turkey will keep on its drilling activities in the Eastern Mediterranean, Çavuşoğlu said: "No country or international institution has the right to comment on this issue."

Turkey's top diplomat also voiced hope that the new government in Greece will help Turkey to maintain its relations with Greece more constructively in the Aegean and Eastern Mediterranean.

He underscored that Turkey wants to resolve the disputes with Greece in the Aegean, instead of escalating tensions.

The Foreign Ministry recalled yesterday that Turkey's first drilling ship Fatih started drilling activities at the start of May west of the Mediterranean island, where, it said, "Our government has granted licenses to the Turkish Petroleum in 2009 and 2012 within our continental shelf in the Eastern Mediterranean and notified the United Nations."

It further said Turkey's second drilling ship Yavuz, which arrived south of the Karpas peninsula on Sunday, will operate on behalf of the Turkish Cypriots within the license areas granted by the Turkish Republic of Northern Cyprus (TRNC) to Turkish Petroleum in 2011.

Since this spring, Ankara has sent two drilling vessels - Fatih and most recently Yavuz - to the Eastern Mediterranean, asserting the right of Turkey and the TRNC to the resources of the region.

Athens and Greek Cyprus have opposed the move, threatening to arrest the ships' crews and enlisting European Union leaders to join their criticism.

Turkey's first seismic vessel, Barbaros Hayreddin Paşa, has been carrying out exploration in the Mediterranean since April 2017.

"In this context, we fully support the recent statements of the Turkish Cypriot Authorities who granted licenses to Turkish petroleum in 2001 which indeed constitute the legal and legitimate basis of the operations of our drilling ship Yavuz," the Foreign Ministry said.

Title of 'spoiled child of Europe' belongs to Greeks

Referring to recent comments by the newly appointed Greek foreign minister, the ministry said, "We find it quite odd the Greek Foreign Minister Nicos Dendias' statement in an interview regarding Turkey's offshore activities in the Eastern Mediterranean, which are being carried out in compliance with international law."

"In fact, the title "spoiled child of Europe" belongs to Greece. And the hellion of Europe is the Greek Cypriot Administration, which became a member of the EU against international law and thus destabilized the Eastern Mediterranean together with Greece for years," it added.

The minister further emphasized: "Being a member of the European Union, allegedly representing the entire Island does not give the Greek Cypriot Administration the right to usurp the legitimate rights and interests of the Turkish Cypriots."

Turkey has made continuous efforts to protect its sovereign rights and the rights of the Turkish Cypriots in the Eastern Mediterranean region, where it has been drilling in its exclusive economic zone (EEZ), which was registered with the United Nations in 2004.