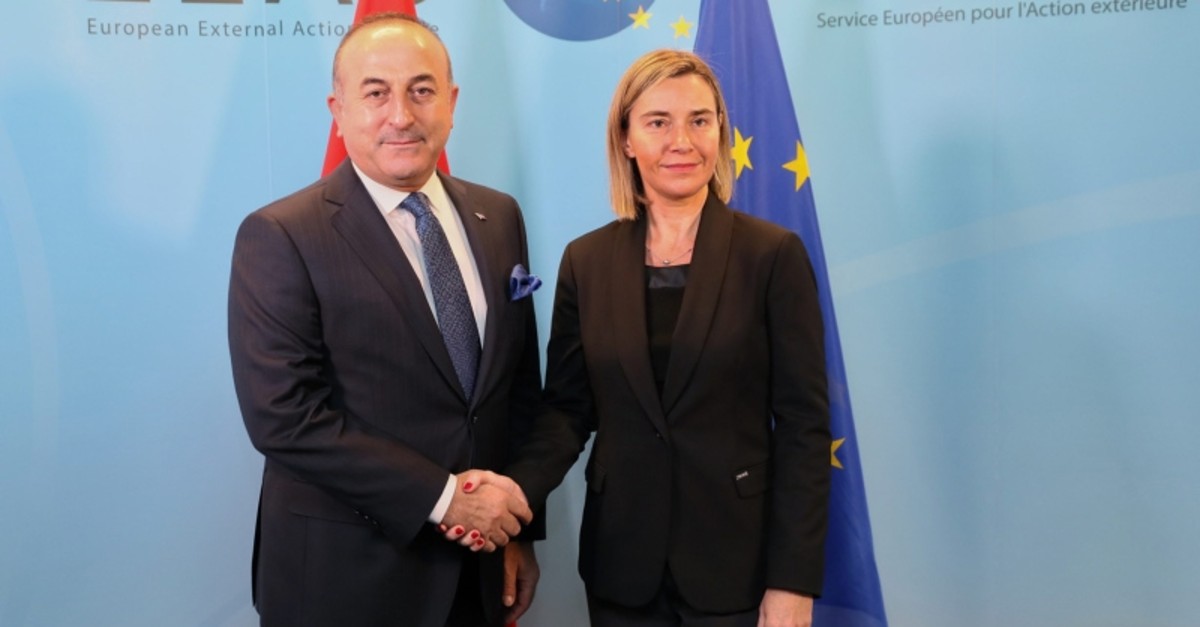 According to diplomatic sources, Mogherini, the EU's high representative of the Union for Foreign Affairs and Security Policy, also confirmed that she talked to Çavuşoğlu "about Turkey's activities in the Eastern Mediterranean."

She said EU member states will discuss the issue, as well as Iran's nuclear deal, immigration and situations in Africa and Libya.

Additionally, foreign affairs ministers of the 28-nation bloc met in Brussels yesterday and were expected to discuss measures against Turkey over its gas drilling activities off the coast of Cyprus, which the bloc called illegal, a statement strongly rejected by Ankara.

Upon their arrival for the talks, German Minister of State for Europe Michel Roth and Austrian Foreign Minister Alexander Schallenberg were cited as saying that the European Union "will symbolically punish Turkey over drilling for oil and gas off Cyprus and threaten harsher sanctions in the future unless Ankara changes tactics."

Last week diplomatic sources said the ministers would discuss the possibility of suspending negotiations on an aviation deal, freeze high-level dialogues, halt funding earmarked for Turkey as an EU membership hopeful and restrict credits offered by the European Investment Bank.

Çavuşoğlu also talked to his Finnish and Swiss counterparts on Sunday about the same issue.

Later that day, Çavuşoğlu said the European Union's steps against Turkey would not yield any results on the Cyprus issue.

"The steps that it [the EU] would take toward us would be useless, it would face backlash," he said.

The minister said the EU should not "stand behind the wrong" for so-called solidarity, and added that Turkey will take additional steps to defend itself.

"No one can prevent this," he warned, stressing that Greek Cypriots have been violating Turkish Cypriots' rights by continuing drilling activities without ensuring the latter's share.

He reiterated that Turkey started its drilling activities in the Eastern Mediterranean as the guarantor country when Turkish Cypriots' warnings were not heeded.

Last Wednesday, Ankara lashed out at the EU and Greece for their statements that Turkish drilling off Cyprus was illegitimate, stressing that these comments point to the usurpation of the rights of Turkish Cypriots on the island. Turkish officials said it showed that the EU was not an impartial mediator in the Cyprus issue.

Turkey has made continuous efforts to protect its sovereign rights and the rights of Turkish Cypriots in the Eastern Mediterranean region, where it has been drilling in its exclusive economic zone (EEZ), which was registered with the United Nations in 2004.

It has consistently contested the Greek Cypriot administration's unilateral drilling in the Eastern Mediterranean, saying Turkish Cypriots also have rights to resources in the area.

Since this spring, Ankara has sent two drilling vessels – the Fatih and most recently the Yavuz – to the Eastern Mediterranean, asserting the right of Turkey and the Turkish Republic of Northern Cyprus (TRNC) to the resources of the region.

The Turkish-flagged drillship Fatih launched offshore drilling operations this May in an area 75 kilometers off the western coast of the island of Cyprus.

The second Turkish drillship, the Yavuz, arrived south of Karpas Peninsula on the eastern edge of the island last week and is expected to launch drilling operations soon.