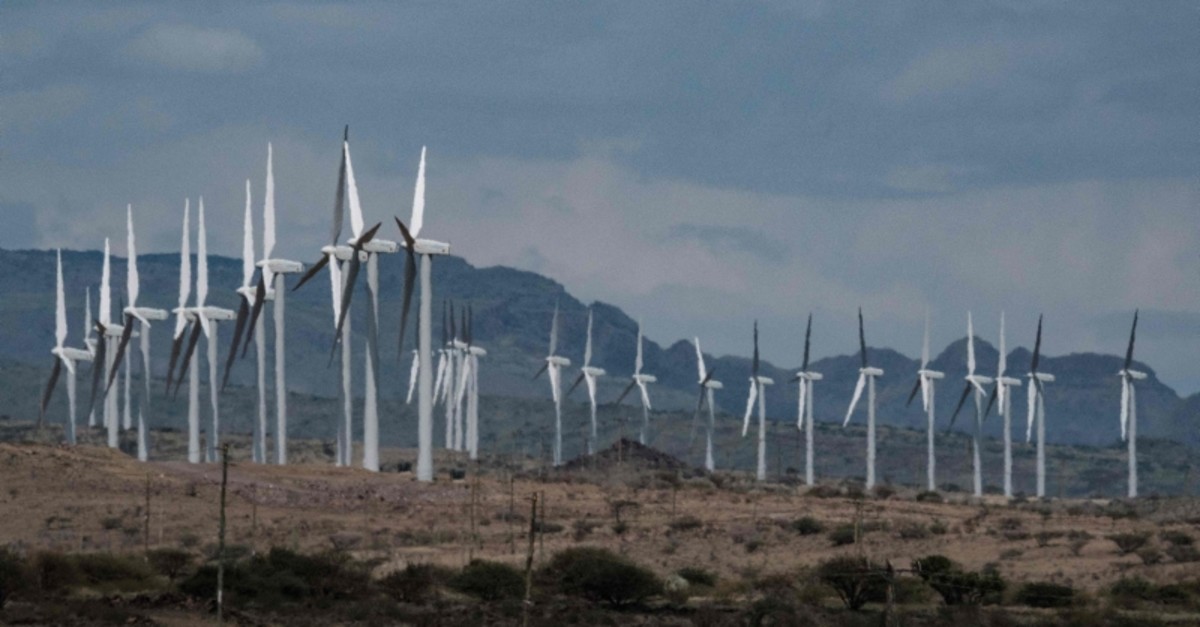 Kenya on Friday formally launched Africa's biggest wind power plant, a mammoth project in a gusty stretch of wilderness that already provides nearly a fifth of the country's energy needs.

The $680-million (600 million euro) scheme, a sprawling 365-turbine wind farm on the eastern shores of Lake Turkana, is delivering 310 megawatts of renewable power to the national grid of East Africa's most dynamic economy.

The largest private investment in Kenya's history, the Lake Turkana Wind Power project was beset with delays and took nearly a decade to rise from the arid landscape 600 kilometres (372 miles) north of Nairobi.

"Today, we again raise the bar for the continent as we unveil the single largest wind farm," said President Uhuru Kenyatta, after touring the project.

"Kenya is without a doubt on course to become a world leader in renewable energy."

The project lies in a natural corridor dubbed "the windiest place on earth" and promises to harness this endless power at low cost.

The nearly-50 meter turbines were engineered to handle the fierce gusts that tear through the "Turkana Corridor", a wind tunnel that generates optimal conditions, year round.

The winds howling near constantly through the barren valley deliver double the load capacity enjoyed by similar projects in America and Europe.

"It is unprecedented. This is one of the most consistently windiest places in the world," said Rizwan Fazal, the executive director of the Lake Turkana Wind Power Project.

A Herculean effort was needed to construct the behemoth wind farm in Kenya's farthest extremes.

The windmills, manufactured by Danish company Vestas, had to be brought one-by-one overland from the Kenyan port of Mombasa, some 1,200 kilometers away.

Each one was customized so its different segments could be packed "like Russian dolls", the company said

More than 2,000 trips were needed to bring all the materials from port to plant.

Some 200 kilometers of road leading to the site had to be tarred to allow trucks through.

Another 100 kilometers of internal roads linking the turbines dotting the hot, desert horizons were also constructed.

The project, far more ambitious in scale than rivals elsewhere on the continent, has been closely watched as a case study of investing in renewables in Africa, where demand for energy is soaring as economies grow and populations swell.

In Kenya -- which relies heavily on hydropower and geothermal -- power is unreliable and costly, hindering business as energy-intensive sectors such as manufacturing look to take off.

Kenyatta has previously committed to 100 percent renewable energy for Kenya by 2020 -- a pledge the government has been accused of betraying with plans to build a coal-fired power plant off the coast in Lamu.

That project -- deemed unnecessary by experts -- has been stalled by legal challenges.

The Turkana wind farm involved years of planning and construction but the turbines went up quicker than one a day, with the last raised in March 2017, ahead of schedule.

But difficulties in financing the transmission line, being laid by state-owned power company Ketraco, and problems acquiring land, meant this landmark project didn't connect to the grid for another 18 months -- in September 2018.

"The farm was built on time. But the project can only operate if you can bring power to the client," said Catherine Collin, East Africa head of the European Investment Bank.

The EU's lending facility loaned $200 million for the project, which received other finance from a consortium of European and African companies

"There was a delay, there was a few difficult moments, I have to say, for everybody, but in the end we all made it," Collin said.

Fazal said it had been "an incredible journey" but more than anything it let the world know Kenya's untapped clean energy markets were open for business.

"It sends a very strong signal about Kenya being ripe for projects," he said.