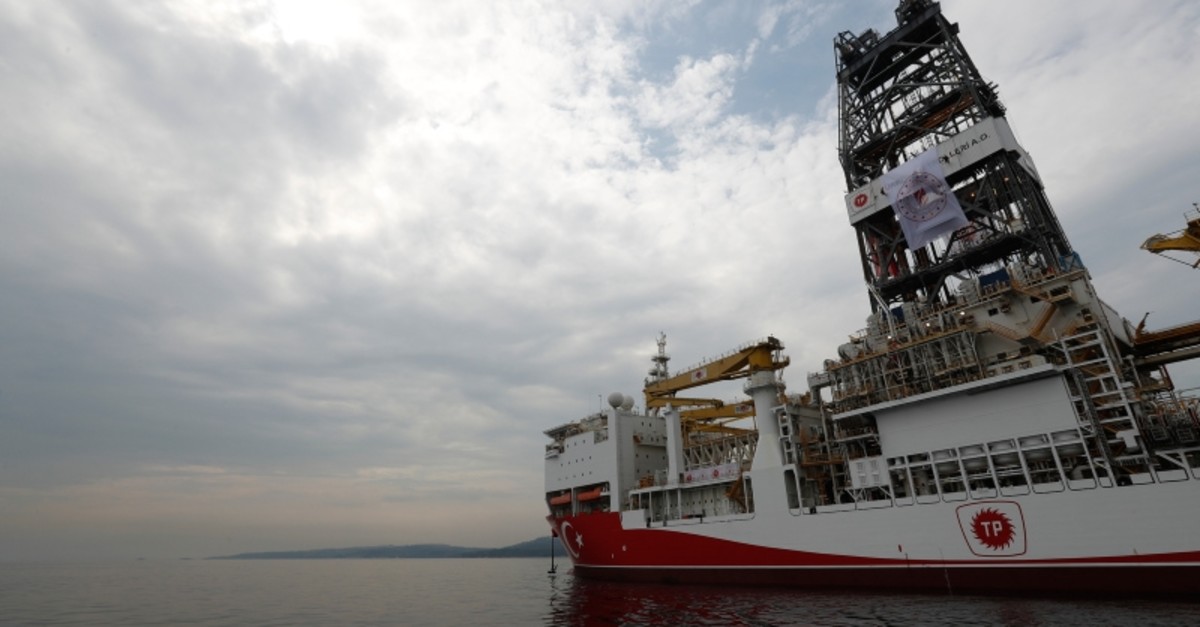 | AP Photo
by Anadolu Agency Aug 07, 2019 4:14 pm
The sixth generation ultra-deepwater drillship, Yavuz, has started its operations at the Karpaz-1 well located in the Bay of Gazimağusa, also known as Famagusta, in the Turkish Republic of Northern Cyprus (TRNC).

"As of today, we reached a drilling depth of 1,710 meters. We have a 2.5-3 month program here," Fatih Dönmez, Turkey's energy and natural resources minister said, following his visit to the Yavuz drilling ship on Tuesday with Turkish Cypriot Prime Minister Ersin Tatar and Economy and Energy Minister Hasan Tacoy.

He expressed his hope that when they reach the target depth, they would find natural gas resources.

From spring onwards when Ankara sent two drilling vessels -- the Fatih and the Yavuz -- to the Eastern Mediterranean, work has been ongoing while asserting the right of Turkey and TRNC to the resources of the region.

"Yavuz drilling ship is the latest in our fleet, while Fatih drilling vessel also continues to conduct its operations in the western part of the island," Dönmez said.

"In August, our second seismic vessel, the MTA Oruç Reis, will also be sent to the Mediterranean. So we will continue to do our research and drilling activities in the Mediterranean with the two seismic and the two drilling vessels," Dönmez said.

The MTA Oruç Reis has been conducting seismic surveys in the Black Sea and Marmara since August 2017.

Athens and the Greek Cypriot administration have opposed Turkey's move in the Mediterranean, and have threatened to arrest the ships' crews, enlisting EU leaders to also condemn Turkey's activities.

Underlining Turkey's strong support for the rights of the Turkish people living in the TRNC, Dönmez said the TRNC government last month suggested forming a cooperation mechanism for joint exploration and profit-sharing of hydrocarbon resources around the island of Cyprus. However, this suggestion was rejected by the Greek Cypriot administration.

Turkish Cypriot Prime Minister Tatar said that Turkey's decisive stance is crucial for the protection of Turkish Cypriots' rights and interests in the East Mediterranean.

"We would like to thank the Turkish government once more because it is not easy to conduct these very high-cost activities," he said.

The decades since have seen several attempts to resolve the Cyprus dispute, all ending in failure. The latest one, held with the participation of the guarantor countries -- Turkey, Greece, and the U.K. -- came to an end without any progress in 2017 in Switzerland.