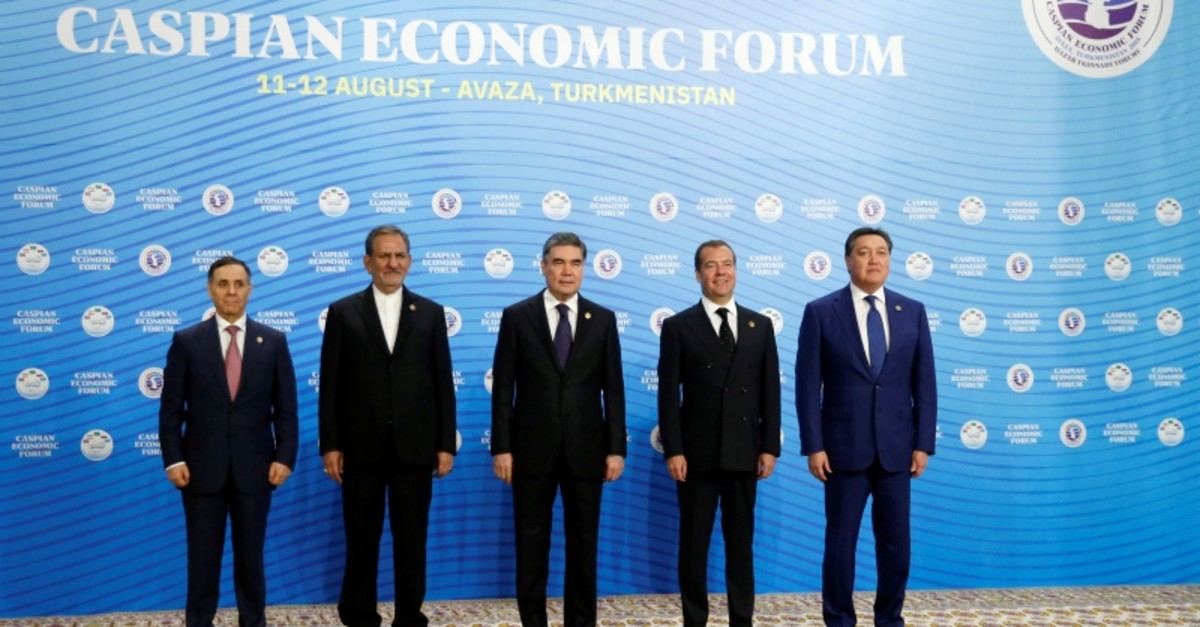 Five countries bordering the energy-rich Caspian Sea met Monday at an economic forum hosted by Turkmenistan in a bid to agree on how to divide the region's oil wealth.

Turkmenistan's President Gurbanguly Berdymukhamedov, who has wielded all-encompassing power since taking office in 2006, styling himself as the former Soviet republic's Arkadag (protector), told the forum that the Caspian energy riches should provide a powerful incentive for the region's development.

It was Berdymukhamedov's first public appearance since July 5, ending speculation about his health including death rumors. Turkmenistan's government had denied the rumours as an "absolute lie" and said the leader was on holiday, posting a video last week of the president's activities on vacation, including riding a horse, training troops, playing piano and driving a jeep through the desert to a perpetually burning natural gas crater in central Turkmenistan, colloquially known as the "Gates of Hell."

Berdymukhamedov appeared to be at full strength as he gave a live televised speech that lasted more than 20 minutes. Video footage posted by Russian outlet Ruptly also showed him greeting Medvedev.

Last year, the leaders of Russia, Iran, Azerbaijan, Turkmenistan and Kazakhstan signed a convention aimed at ending decades-long uncertainty over exploitation of its resources.

The agreement establishes rules for declaring each country's territorial waters and fishing zones, but the issue of dividing seabed that contains rich oil and gas fields is subject to further negotiations.

Russia and Iran are yet to ratify last year's agreement. Medvedev, who attended Monday's forum, said that the ratification is expected "in the near future."

Jahangiri was non-committal, making no commitments in his speech at the forum. He argued that non-Caspian nations shouldn't meddle in the region's affairs and charged that the United States' unilateralist policies and its emphasis on sanctions threaten stability of the region including the Persian Gulf.

"Security of the region can and should be established only by regional countries," Jahangiri added and continued:

"Stability and security of international waters as well as northern and southern coasts and Strait of Hormuz are Iran's red line."

He said the unilateral policy of the U.S. imposing sanctions and threats against Iran jeopardized the stability and security in the region, which, Jahangiri warned, created significant problems in the international arena.

Turkmenistan and Azerbaijan have yet to agree on how to share the reserves under the seabed. That has impeded progress of the Trans-Caspian natural gas pipeline that would carry Turkmen gas across the sea to Azerbaijan and further on to Western markets.

"It's a very sensitive issue," said Bahram Huseynov, a vice president of Azerbaijan's state oil company SOCAR. "No concrete steps have been made yet and it's too early to discuss specifics."

Huseynov added that demilitarization of the sea border between Azerbaijan and Turkmenistan could facilitate the talks on dividing the energy riches.

The West has long encouraged prospective trans-Caspian pipelines as part of its efforts to diversify sources of energy, while Russia and Iran have watched the plans with unease.

More energy exports from the Caspian would compete with energy shipments from Russia, which has sought to expand the sales of its oil and gas to European markets.

Iran has argued for energy shipments from the Caspian to cross its territory, arguing that trans-Caspian routes are too costly and unsafe.

The Union of Chambers and Commodity Exchanges of Turkey (TOBB) President Rıfat Hisarcıklıoğlu was among the attendees of the forum.