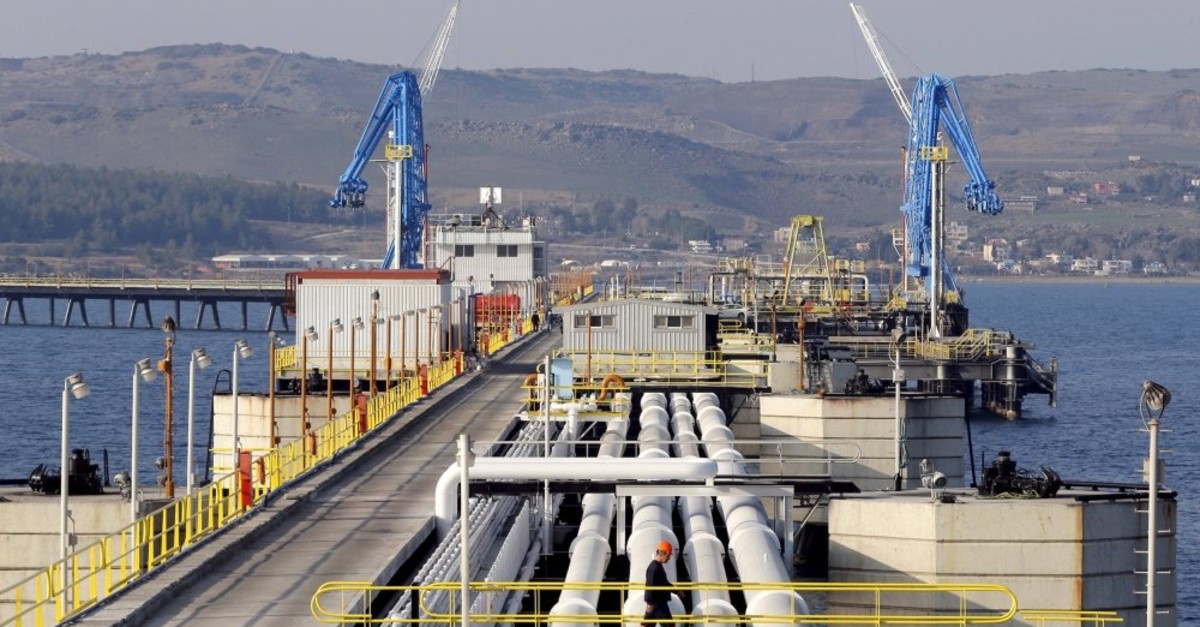 A view of Turkey's Mediterranean port of Ceyhan, which is run by state-owned Petroleum Pipeline Corporation (BOTAu015e), some 70 kilometers from Adana.
by Daily Sabah with AA Sep 05, 2019 12:45 am

Announced last week, plans to build a new pipeline to transport Iraqi crude oil from the oilfield of Kirkuk to the Turkish port of Ceyhan alongside an existing track promises greater oil trade

The construction of a new pipeline running parallel to the existing Iraq-Turkey crude oil pipeline is expected to pave the way for greater oil trade through Turkey's southern port of Ceyhan in the Mediterranean Sea.

During the meetings, among the variety of energy projects discussed was the extension to the existing Iraq-Turkey Crude Oil Pipeline, also known as the Kirkuk-Ceyhan pipeline. Ghadhban conveyed the Iraqi Oil Ministry's intention to construct a new oil pipeline to carry Iraq's crude oil from Kirkuk to the Turkish border on the old route, with the Iraqi government's approval.

Dönmez responded positively to this proposal and said the new parallel pipeline, which would stretch almost 1,000 kilometers (621 miles) from Kirkuk to Ceyhan, would be in a position to carry oil resources not only from the north of Iraq but also from other regions.

"They [Iraq officials] spoke about new projects and we welcome them," Dönmez said.

Oğuzhan Akyener, president of the Turkey Energy Strategies & Politics Research Center, said the Iraq-Turkey Crude Oil pipeline was initially constructed to carry Kirkuk oil to global markets through the Ceyhan terminal, with a total capacity of 1.2 million barrels of oil per day.

"However the Iraqi part of the pipeline has been damaged due to attacks over time, and in the end became completely unusable after Daesh attacks. Therefore, the KRG [Kurdish Regional Government] started to carry the oil produced from the areas under its control firstly through oil tankers and later via pipeline that they reconstructed, and which is linked to the Kirkuk-Ceyhan pipeline on the Iraq-Turkey border with a daily capacity of 1 million barrels of oil," he explained.

According to Akyener, the oil trade today through the semi-autonomous KRG-controlled territory continues despite fluctuating trade volumes from time to time, but trade via Iraq's central government in Baghdad has almost stopped. Currently, oil exports average between 550,000 and 600,000 barrels per day.

"The reconstruction of the Iraqi part of the Kirkuk-Ceyhan pipeline is important for the restart of greater trade and for increasing Ceyhan's importance in oil markets worldwide," Akyener said.

According to data from Turkey's energy watchdog, the Energy Market Regulatory Authority (EMRA), Iraq sold Turkey 528,983 tons of crude in February of this year and 465,338 tons in March. In April, a total of 437,129 tons of crude bought from Iraq while total amount of imports were recorded at 2.3 million tons. As Turkey's crude imports soared in May to 2.6 million tons, purchases from its southern neighbor jumped to 757,447, recording a 73% rise on a monthly basis.

The data showed that Turkey imported the most crude oil from Iraq at 898,915 tons in June.

However, Akyener added that even though the route of the proposed pipeline is obvious, construction will take two to three years to complete, taking into account security and financing issues.

"From a security perspective, the fact that the planned pipeline will be linked to the central Iraqi oil pipeline system as before, signals to us that Iraq prefers Turkey as a second exit door after Basra [Iraq's main port] for its oil exports," Akyener said.

Iraq will also be able to transport the maximum volumes allowed from oil produced in the southern fields through the proposed pipeline should tensions in the Strait of Hormuz, one of the world's most strategic choke points for energy transportation, curtail oil transmission, Akyener said. Nearly 90% of Iraq's crude oil production comes from onshore oil fields in the southern part of the country, while the remaining 10% comes from oil fields in the north of the country.